Album Review: Too Much Information by Planet Smashers

I love Montreal ska legends The Planet Smashers. They are one of the first ska bands that weren't one of the big three (Bosstones, RBF, LTJ) that I really got into and I have been excited by everything the band has released since then. In January of 2016 founding member, guitarist and lead singer Matt Collyer broke his neck. A part of me assumed that this would sadly be the end of the Planet Smashers and understandably so, a broken neck is kind of a big deal. To my amazement, the band were back playing shows in May of the same year and have continued to play shows on a semi-regular basis since, including some visits to the UK and Europe. Last month the Smashers released their ninth studio album, their first in five years, Too Much Information on Stomp Records. I couldn't wait to give this a listen. 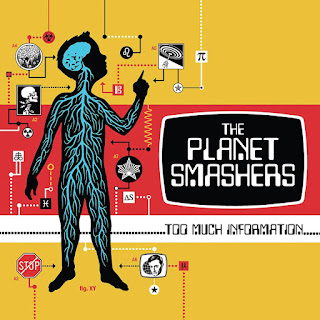 Too Much Information begins with its title track. Immediately we are greeted with that trademark Planet Smashers sound. Mixing ska, two tone and punk together to create some of the most danceable sounds around. Too Much Information is about the current culture of sharing everything on social media and how it can become slightly overwhelming. Break My Neck (A Love Song) looks at Collyer's experience when he broke his neck. It's quite a sweet song where he sings that, even though he may not be able to feel parts of his body, his feelings for the people he loves remained strong. As love songs go, this is probably one of the least relatable around but, my goodness, it's good. Patrizio McLellend's organ playing really stands out on the song, adding a lot of playfulness to proceedings. Can't Stop is about a love that borders on obsessive. Here the Smashers show off the edgier side of their sound with Collyer's vocal feeling a lot more serious than the light-hearted, jovial style we're used to and the screechy horn blasts add some drama to the song.

Brain Freeze sees the band show off their sense of humour as they play a song about eating a cold ice cream too quickly. Something a lot of people can probably relate to (not me, because ice-cream = yuck!) and will bring a big smile to their faces. It's a bit of a silly subject but there isn't a band in the world better at pulling something like this off than The Planet Smashers. The fifth song, Aim High, sees the band get a bit funky. Starting out with a summery, good time vibe I found myself instantly wishing for the sun to come out. When the verse hits things change, with the tempo of Collyer's vocals really picking up to the point where he's almost rapping. When the chorus comes back we go back to the good time summer feel that will turn any frowns upside down. The song is about taking a chance and asking out the girl who you think is out of your reach. This is one of my favourite tracks on Too Much Information. Up next is Going Out Solo which is a classic Planet Smashers sing-along – particularly the chorus of "oh, oh, oh, oh, oh, I'm going out solo." That's going to get stuck in your head for a long time. This is some pure unadulterated good times. Superfan has a fantastic building introduction that will quickly get you going into a full skank. This is the first time on the album where the Smashers horn section really get to let loose with a solo that all fans of ska will adore. I can't wait to see this song played live – it's going to be a lot of fun.

Good Vibes kicks the second half of the album off with a hand clapping introduction before the drums come in. I can see this being very popular with a Smashers crowd, all that participation at the beginning of the song. I've just had a lot fun clapping along whilst listening at home. This might be the least danceable song the Smashers have ever written but it's all about clapping along and having a great time doing that. Light In Your Smile is a chilled out love song that will have you grinning like a fool, a very happy fool. This is another big highlight for me on the album. The addition of some percussion gives the track another layer and a very danceable beat. You try and stay still whilst listening to this song! There's also some beautiful harmonies on the song, something that has been lacking a little bit throughout Too Much Information so far. The tenth song is some up-tempo, get your knees up ska punk. Titled Ear Worm, the song is about trying to write a song that will get stuck in people's heads and getting a bit frustrated with it. Al Fecteau (saxophone) and Patrick Taylor (trombone) are the undoubted stars of the show here, laying down some great horn lines. The horn lines continue on the next song, We Ain't Taking It. As you might have guessed, the song is about pushing back against anyone who might be trying to hold you down. I loved the empowering feeling that this song gives off, something that is sometimes missing in ska music.

The twelfth track Hookie continues the up-tempo fun of the last few songs. It's about skipping work and having a day of fun. Sometimes this is important for your mental health. Tempo-wise the song is pretty unrelenting and never really slows down. I think this really helps with the whole theme of the song – it's about having fun and it's a really fun song. This is classic Planet Smashers. The penultimate song is titled What's Going Down? Instantly feeling slightly more serious with a heavier tone to the horns, the song is about reconnecting with old friends. Something we should all try and do from time to time. Those of us who have grown up with the Planet Smashers will no doubt relate to the song. It's also a fairly cathartic song, particularly when you sing the chorus, it will encourage you to do what they're saying. Too Much Information is finished with Runaway. Runaway ensures that the album is concluded with a chilled out song about wanting to escape from your problems and disappear. The track feels a lot softer and a lot more sombre than anything else on Too Much Information, interestingly leaving you feeling a bit sad at the end of the album. Personally, it's not how I like to finish a ska album but you also couldn't put a song like this in the middle of the album as it would ruin the flow. That said, it is a great song in its own right.

The Planet Smashers are on top form on Too Much Information. When a band has been going for as long as they have, there is always a bit of trepidation whenever words "new material" are uttered but this is a fantastic body of work and has me so excited to see them when they return to the UK in August. I still love The Planet Smashers.

This review was written by Colin Clark.
Posted by Emma Prew at 11:50:00