Album Review: This Could Be Okay by Cold Wrecks (by Emma Prew)

Move over Spanish Love Songs, Cold Wrecks might just be my new favourite band. The Brooklyn, New York, four-piece released their new album, This Could Be Okay, at the beginning of May and I just can’t stop listening to it. It’s one that I want to tell everyone I meet to go and listen to. So, even if you read no further, you should go listen to this album now!

If you are going to read further however, here’s what I have to say… 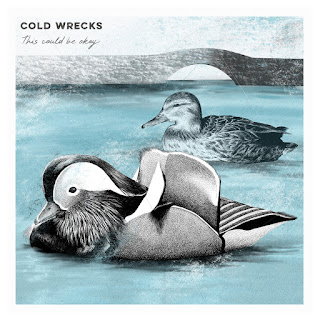 This Could Be Okay opens as all great albums should, with a track that sounds like an opener. In Time begins slowly with a soulful, clean guitar riff before the vocals of the first verse come in and take over the lead role. It’s all very restrained, at least until the words ‘What a disappointment’ are uttered – the rhythm section kicks into gear and the pace picks up for an awesome opening tune. In Time sets the tone for what’s to come, with a focus on struggling with mental health problems but knowing, or at least hoping, that you will be fine eventually – in your own time. I particularly enjoyed the nod to the album’s title in the line ‘…Of spelling out in Morse Code: “This could be okay”’. A bold and almost pop punk style bass line introduces us to the second song, Crossing Sign. If you’re an existing fan of Cold Wrecks then you might just recognise this song from the EP of the same name that was released last October (which also had an excellent Against Me!/Fest tribute song on it, Bury Me In Gainesville). The track fits in here wonderfully as the second song on the album, with its upbeat pace and catchy guitar riffs. There’s even a killer guitar solo in the middle. Crossing Sign is about dealing with anxiety which is something a lot of people will be able to relate to, myself included.

January First is up next and, again, you might recognise this one. Personally I’ve had it on rotation a lot since the 1st of January this year – they couldn’t really have released it at any other time, right? Hearing the track now as part of the album, I like it even more. January First is about dreading a new year because, in some ways, it means your life is flying by. Basically, this is a perfectly relatable and somewhat reassuring song about getting older. The song features some great exchanging of vocals between Craig and Mike (‘When did you start feeling so old?’) as well as some gang vocal-style shouts of ‘I don’t know.’ that I imagine are would be brilliant live. Fourth track Garbage Universe wastes no time in getting going. The bouncy melody would almost have you fooled into thinking this was a happy tune – but if you think that then you’re not hearing the words. The song is about trying to ‘let go’ of someone, or something, that used to be in your life and dealing with the anxiety and general difficulties that comes with that. The highlight has to be the hugely cathartic bridge section – ‘About a handful of nights, When a couple things felt right, About a handful of days, When all we could say was goodbye.’ and the shouts of ‘goodbye! goodbye!’ that are repeated as if laying demons to rest. The Season is another upbeat track, musically at least. It’s poppy in melody but packs a punch with its delivery. The song also features one of the catchiest choruses of the album – ‘Hopeless lines I’ve practiced one too many times, Losing sight, deluded into thinking that, Self-aware means self-loathing.’ The Season is about suffering from, among other mental health issues, seasonal affective disorder – ‘You know, the cold wrecks my ability, To function half-appropriately.’ This is something that I can completely relate to. I also really enjoyed that they managed to namecheck themselves in that lyric! Small things.

Long Island is the latest single to be released from This Could Be Okay and is up next. I think this would also be the first song on side B of the vinyl record. I say this not just because it is the sixth of eleven tracks but because it has a restrained opening verse with softer vocals and atmospheric strums of a guitar – much like the album’s first track. When the bitter-sounding line ‘I’m gonna die at a hospital on Long Island.’ – which somehow manages to be insanely catchy and have you humming the tune to yourself for days – is declared, the pace picks up again for what we know to be classic Cold Wrecks. This song does however remind me a bit of Pup, perhaps because it feels angrier and more forceful than the previous songs (and Pup are pretty angry). There’s also a great sense of storytelling on display here – which is never a bad thing in a song. Furiously frantic guitars and drums are the name of the game with Panicking, which is one of the shortest songs on the album at just over 2 minutes long. This is quite literally a song about panicking (again, something I can relate to), or having a panic attack, and the music couldn’t fit the lyrics more perfectly. You can’t explain why you might have these feelings sometimes but maybe you could play someone this song – Cold Wrecks get it. ‘So I’ll pretend I’m listening, Smile big, don’t let them know "I’m panicking!"’ (That latter part is yelled by the whole band – talk about impactful.) The album’s eighth track, Bought Right In, was an instant hit with me the first time I heard it. With a finely crafted blend of crunchy guitars, a melodic bass line and hard-hitting, brutally honest lyrics, Cold Wrecks have struck gold here. And that’s just the first verse – ‘Hanging on a sidewalk close to the edge, Wondering who would miss me if I was dead, ’Cause nobody told me about mental health, So I found a couple ways to deal with it myself.’ There are, of course, aspects of mental health struggles mentioned throughout this album which is hugely important because it cannot be discussed enough. Bought Right In, however, is about how ‘mental health’ wasn’t something that was spoken of when we (twenty/thirty-somethings) were growing up. I think it will be comforting to a lot of listeners to know they are not alone in these feelings – you’re never alone. Also, the gang vocal ending is superb.

After that blast of energy, it seems only right that we are due a change of pace which makes Light a welcome respite. There are gentler guitars from the outset here for a slower and far calmer feeling song than anything before it. If I’m interpreting the lyrics correctly, feeling or being ‘light’ means acknowledging that you might not always be okay. There are several extended instrumental sections that give the song an almost dream-like feel, as you nod your head along to the melody. Towards the end of the song there’s a poignant repetition of ‘Before you break.’ until the song ends with the same verse it opened with, as if concluding things. A burst of energy kicks in for the penultimate song of This Could Be Okay, 8mm. It’s a head nodder of a track that’s packed with poppy verses and an uplifting, shout-along-able chorus. That said, it doesn’t feel like your typical ‘pop punk’ song as Cold Wrecks don’t seem to stick to the formula you might expect, jumping from a fast-paced riff one minute to a slower, emotional section the next. ‘And did you know that you were not alone?, As you wandered through the vapour getting lost, No, you didn’t know, and now you’re almost gone.’ Phew! And then IDK brings the album full circle. Much like In Time could only be the album’s opener track, IDK is truly an album closer. Beginning slowly, this is perhaps the ultimate song about growing older, perhaps slightly wiser but still feeling lost in some ways. There are more catchy riffs to hook you into the song but it’s the lyrics on offer that really hit home. I’m weirdly chuffed about being able to relate to the exact age mentioned in the song – I am 28 too. ‘And I don’t know what’s gonna happen, When I was 18, I swore I’d never, But ten years has a way of teaching, Now I’m learning.’  Not content with ending the album there, Cold Wrecks throw in a very similar riff, if not the same riff, that featured so heavily in the album’s opening track. As if I needed further encouragement to just hit play on the album again!

If you like music to make you feel something, if you like catchy melodies and honest lyrics that will stay with you long after you’ve finished listening, if you like to be able to relate to the words being sung, if you like ducks… You’ll love This Could Be Okay and Cold Wrecks. I certainly do.

You can buy/stream/download this definite album of the year contender, This Could Be Okay, on Bandcamp (as well as purchasing the vinyl version) and you should like Cold Wrecks on Facebook while you’re at it.

Last but not least, the beautiful album artwork is by Mikaela Jane Palermo.
Ducks are good.