I first became aware of Problem Daughter following the release of their 2016 album Fits Of Disorganized Boredom. I instantly fell in love with lead singer Regan Ashton's raspy vocals as well as the big sing-alongs that could be found throughout the album. Fits Of Disorganized Boredom had been played a lot in CPRW towers since its release and we were super excited to discover that the Salt Lake City four piece would be releasing a brand new album on Wiretap Records, as well as with our friends in Belgium Bearded Punk Records, in early spring. Titled Grow Up Trash, the album features ten brand new songs that I was really looking forward to hearing. 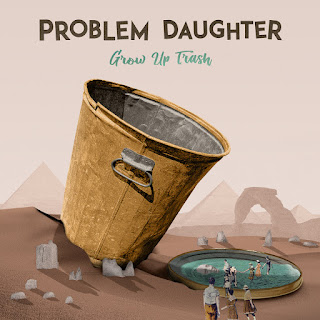 Grow Up Trash begins with the song Pocket Sand. Beginning with a sombre sounding guitar strum, Ashton emotionally shouts out "I never thought I would grow up trash", as a nice nod to the album’s tile, before things really get started and we get a verse with some really self-deprecating lyrics. A common theme for Problem Daughter is switching up tempos and melodies quite dramatically during their songs and that's what happens here. The chorus is a slow foot stomper that builds to the uptempo verses that add so much energy. Up next is Mercury In Retrograde. On this track, Problem Daughter take everything you're taught about song structure and melody and throw it away. This is a glorious free-for-all where anything could happen. It works well with the song’s topic, living life with a carefree attitude and not being accountable for anything. The song is packed with punchy sing-along moments that quickly get ingrained in your mind, which is just marvellous. Modern Stigmata was one of two singles Problem Daughter released before Grow Up Trash came out and it was an instant hit for me. It is more of a standard, sing-along punk track with simple structure and melodies and the band show that when they do write music in this way they blow most other bands out of the water. I feel like this one is going to be a huge favourite with a Problem Daughter crowd as it's another ear worm that you'll be singing loud and proud back at the band. The track is about dealing with a mental health issue and realising that life goes on for everyone around you.

The fourth track is the brilliantly titled Take A Walk On The Mild Side. The track starts out giving you the impression that it's going to be a bit of a foot stomper before we get this beautiful guitar riff that fills the song with energy. The song really comes into its own during the final stretch when we do get that foot stomper moment and Ashton sings/chants "what could I do to make a sad girl happy?" over and over again. Such a good way to finish the song. Jagweed is a big highlight on Grow Up Trash. The slow start really welcomes the listener into a song that is packed with more critical statements that have been made about Ashton that have made him feel like giving up before deciding to own who he is and stopping caring what others might think. This is one of the poppiest songs on the album and another that you'll be singing for days after you listen to it. Up next is the other single from Grow Up Trash – Self Amusing Smile. This was the first one released in the build up and really wet my appetite for the upcoming album. At the end of this year, when I think about my favourite songs of 2019, I am very confident that Self Amusing Smile will be one of the first in those thoughts. The song takes you on a bit of a journey, from feeling terrified of the world to gaining the strength to not only look after yourself but also the people that you love. I really enjoyed how much the track feels like an anthem, hopefully it will inspire people.

Lancaster is a shorter, fast paced track filled with some punchy vocals which bring all the energy to the song. Lancaster is about being a bad friend and owning up to that fact. Like I said, it's a shorter track but it does a great job with keeping the momentum of the album going. The eight track on Grow Up Trash is titled A Bastard's Hope. The first thing that really stands out on the song is the guitar part that links up the intro and the main portion of the song, it's a slice of pop punk perfection. The song travels along in this poppy style before abruptly switching to a stabby style that adds a bit more attitude to the song. The penultimate song is named Tired About It. It's a song about trying to make people see the good in you. The lyrics in the chorus "cause we're diamonds in dirt, pearls in the sand" are among my favourites of the year, if not of all time. They just give you a nice, positive feeling about who you are. I absolutely adore a song that gives you that empowering feeling. Grow Up Trash finishes with Gin + Mio. It's another empowering song to finish the album in a positive way. It talks about going after your dreams and passions no matter what negative thoughts people around you might have. Problem Daughter channel their inner Lawrence Arms on the song and it sounds really big. What a fantastic way to finish Grow Up Trash.

I hyped this album up a lot before I listened to it and I am so pleased to say that it didn't disappoint. Like any second album should do, there is clear progression here but the band haven't stepped away from what I loved about them in the first place – that makes me happy. Now Problem Daughter are on a European record label, I do hope that means that at some point soon they'll be making their way to the UK.

This review was written by Colin Clark.
Posted by ColinsPRW at 12:15:00