Album Review: Live Free by Get It Together

In April, Scottish melodic hardcore band Get It Together released their first full length album since Perspectives in December 2013. Titled Live Free and released on Make-That-A-Take Records, Get It Together manage to storm through thirteen songs in just twenty-seven minutes. Just from that nugget of knowledge, I'm sure that you can guess that Live Free is going to be a high-octane, up-tempo time that's likely to be a lot of fun. 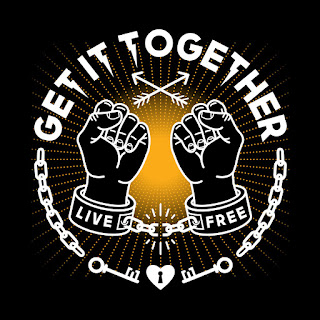 Live Free begins with Eviction Notice. Opening the song with a mix of sirens, a heartbeat and a ominous sounding guitar before things really get going gives the track a bit of tension before it really jumps into life. The song looks at life through the eyes of somebody seeking asylum and how they are doing it, not because they want to take from the country they are moving to but because they want to live in safety and without fear. This flows nicely into the second track Referendamania which is about the complete and utter balls up of the referendum in the UK. Lead singer Mark Fraser sings about his frustrations of "always left with the short end of the stick and we walk away empty handed." In true hardcore tradition, there's a feeling of empowerment in the song that encourages you to fight back and take things back for yourself. Silence is surprisingly the only song on Live Free that falls under the one minute mark. Played at a ridiculously fast speed, with some guitar riffs bordering on heavy metal style shredding, Silence is such a hard hitting track that will leave you breathless. The fourth track, Marching Orders, is about abiding to old laws that don't work in the here and now. Marching Orders is one of many big fist in the air sing-alongs on Live Free. There's a big feeling of unity pouring out of this album that I just love.

Worn Out sees Get It Together move onto the topic of depression. Mark sings about dealing with the symptoms of depression on a day to day basis and how it affects your life. This is one that will be really relatable to many listeners and will hopefully let them know that they are not alone and may even feel cathartic. Track six, Hole In A Head, originally appeared on Get It Together's last EP Rebuild. Recover. Without a doubt the catchiest song on Live Free, I can see a Get It Together crowd getting really excited when they play this. It's about seeing a friend for who they really are and how sometimes you see it too late. This track really takes the term melodic hardcore literally with one of the hardest deliveries of a chorus on the album but when we get to the verse it's so beautifully melodic, making me think of bands such as Strung Out and Good Riddance. On The Brink is a song about how people who are pushed to the edge will make bad decisions. It's only a short song that feels more like a chant, or even a sermon, rather than a song. It works very well at really hitting home its point.

Goodnight Vienna is about being there for a friend you know is in an abusive relationship. It's hard hitting and the music reflects that. It makes you get angry about the situation but can also be very cathartic to anyone in a similar situation. Mark's voice changes from angry to hopeful during the song, really giving the track that extra bit of emotion. The ninth song, Gentleman's Club, starts slowly with a long and threatening introduction before the band launch into a furious song about smashing the current system of all the rich white men in power. The contrast in the slow start and then the following rapid fire section of the song does a fantastic job in portraying the anger that Get It Together have on this subject. Set To Explode sets off at a sprinter’s pace, really dragging you along for the ride. This is without any doubt the hardest track on Live Free so far. This makes sense as it's about bottling your feelings up and feeling ready to really lose your temper. I love how the music reflects the overall meaning of the song, it shows a lot of thought has gone into crafting the song.

Metamorphosis talks about not living up to someone’s expectations and realising that you need to follow your own path in life. This is something most of us in the punk scene will relate to, I'm sure we've all been told at some point that we should do things a certain way and known that it's not for you. This song could become somewhat of an anthem for Get It Together. The penultimate song on Live Free is titled What A Waste. Following on from Metamorphosis, the song also talks about discovering who you are and not wanting to waste your life. This is a short blast of heavy hardcore music that will really get a crowd crashing into each other in between doing some big head-banging. Last up is the five minute epic Without You. Considering the whole album is just 27 minutes, you really get a sense of how short the other songs are given this final jam is five minutes long. Epic is definitely the correct term for the song with its shifts in tempo and melody and some big gang sing-alongs. It's a personal song that's also a tribute to a fallen loved one. It's an extremely powerful piece of song writing and is a fantastic way to finish Live Free.

My favourite type of hardcore punk is the type that gets you hyped up and empowers you. That is certainly what Live Free does. With plenty of political and social songs that will have you wanting to bring down the walls, smash the system, destroy the wheel and all that kind of thing. Fantastic work from Get It Together. Hopefully they don't leave it so long between Live Free and the next album!

This review was written by Colin Clark.
Posted by Emma Prew at 19:28:00