Album Review: Yes, I Can't by Devon Kay & The Solutions

You probably know Devon Kay best as guitarist and backing vocalist of Direct Hit. When he's not melting faces with Direct Hit, Kay fronts his own band – Devon Kay & The Solutions. In February they released their first album in over five years title Yes, I Can't. Over the years Devon Kay have evolved from a folk band, to a pop punk band and now to their current state of a pop punk/ska/folk band. This was clearly going to be a varied album, with a little something for everyone that should make for an extremely fun ride. 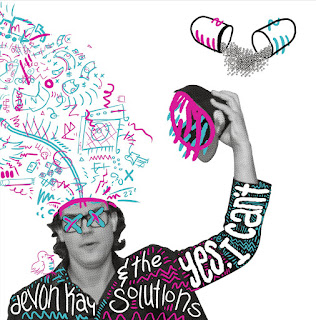 Yes, I Can't begins with the short More Years. It kind of works as an intro as well as a standalone song as it leads seamlessly into the album's second song, Make No Mistake. More Years is a catchy folk pop song where Kay acknowledges the time between Yes, I Can't and previous album Losing IT. There's a sly joke to some comments about the polished sound of that previous album which put a smile on my face. Make No Mistake is a rambunctious affair. Starting out with what we think is a banjo before a full band effort, including brass, begins and a big ball of energy hits you. The song has this urgent feel which drives it on but also doesn't take itself too seriously with the addition of some "da da da" chanting harmonies. Up next is Fresh. If you're only familiar with Kay's work with Direct Hit then this might be more of what you were expecting from Yes, I Can't. (Which is kind of ironic given the song’s title). It's a catchy pop punk track with a sharp and punchy verse and a melodic chorus that's the real earworm. Fresh is actually a pretty sad love song that talks about wanting to be a certain way for someone but your mental health holding you back.

Up next is the album's title track. This is another catchy pop punk track that you will be singing to yourself long after you've finished listening to the song. Never one to take himself too seriously, the song is littered with these insane harmonies that had me thinking of The Muppets. I bloody love The Muppets. On this track Kay sings about not always being able to be there for someone despite how much they might want you to be. The song’s conclusion is a thing of wonder, the level of details in the harmonies blew me away and it gives the song such an energy it's hard not to be affected by it. The fifth song, A Lovers Trip, slows things down quite considerably. The guitar intro along with the opening lines of "show me all your darkest fears, I want all the roots and shame" give the track such a sad and downtrodden feeling. As the song progresses there is a bit of mood lift as Kay talks about wanting to talk to someone and offer help without trying to smother them. The inclusion of brass and a tempo shift alongside some gang vocals ensure the song closes on a high. Old Scent opens with a powerful drum beat courtesy of Ryan Solava. This drumming really fleshes out the first half of the song as Kay sings about things that have happened to him that will stay forever and would feel weird if they weren't there anymore. Once we reach the second half of the song we morph into a more traditional sounding punk song and another mega ending with Kay repeatedly singing "and I know what I done wrong" with a guitar riff that adds plenty of emotion.

The second half of Yes, I Can't kicks off with Re-Relocating. Re-Relocating sees Devon Kay & The Solutions exploring the folkier side of their sound. The opening line of the song grabs your attention with its nod to the Starship classic We Built This City – "well We Built This City on alcohol." From there we are treated to an enchanting track that you can have a great dance to. I love this hark back to the band’s early years, this is such a big contrast to Kay's work with Direct Hit but it still is fantastic. I really enjoyed this song. Good Pill Hunting sees the band travel down a completely different path. Combining snotty punk rock with synths and big brass lines, adds yet another different style to Yes, I Can't. All these different styles really show off the skill of these guys as musicians. The song is about dealing with addiction and how the need for drugs makes you feel. I love the positive ending of the song where Kay is determined to beat the addiction. Hopefully this song will in some way inspire and help people. Broad Shoulders follows this and is a slower song that allows Kay to really put a bit more of dramatic mood into the track. As the song goes on, the emotion builds and Kay's vocal gets more and more of a twang that helps the song to stand out. Kay has this great ability to make you feel like you're listening to a story with his lyrics, that's really evident on Broad Shoulders.

Great American Roundabout has a sound that reminds me of something but can't quite put my finger on it and to be perfectly honest it's really bugging me. It sees Devon Kay & The Solutions add another string to their bow of sounds with a kind of garage punk, kind of rock 'n' roll, kind of big band combination. The line that really stands out the most is the repetitive cry of " you got me round got me round got me spinning all around all around." The track is one of the angrier songs on Yes, I Can't. It's about being frustrated about people not being blunt and to the point and making you run around in circles. The penultimate song is titled One Outta Two. It starts out with an echoed vocal that adds a whole lot of atmosphere before we lead into a piano section that I didn't know I needed but when it hit I absolutely loved. This gives the song so much life and makes the song so infectious. One Outta Two is about making 100% sure that your relationship is for keeps before committing for life. The addition of a female vocal gives the song an extra element and adds some exquisite harmonies. Yes, I Can't is finished by Temporary Displacement. The song starts out in high tempo fashion with Kay storming through the opening verse. I was trying to follow along with the lyrics on Bandcamp and had a bit of a tricky time keeping up. When the song reaches its half way point the tempo drops and we move into more of a chant like section. This slowly builds with harmonies coming from all over the place. I often say that an album’s last song needs that big feeling. Devon Kay & The Solutions do a perfect job of ensuring that Yes, I Can't finishes in a big way!

If you're new to Devon Kay & The Solutions then Yes, I Can't really will serve as a great introduction. Showcasing the many sides of the band’s style, it's a varied album that keeps itself feeling fresh and always keeps you interested.

This review was written by Colin Clark.
Posted by ColinsPRW at 12:38:00