I stumbled upon Reconciler when I was scrolling through my Bandcamp feed and I saw the artwork for their new album Set Us Free. Featuring a wolf sitting on a red pillow with a rabbit and some dark clouds behind it, it was quite startling. This was enough to make me want to check out Set Us Free and I was really impressed with what I heard. Reconciler are a three piece band from Atlanta, Georgia. They formed in 2016 and had already released a debut EP before the release of their first full length Set Us Free which was released in February this year on A-F Records. Reconciler is Joseph Lazzari on guitar/vocals, Darren Nuhfer (formerly of Less Than Jake) on bass/vocals and Kelsey Wilson on drums. 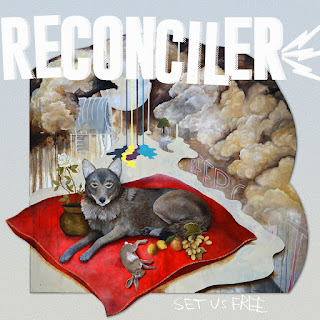 Set Us Free begins with the song Honest Words. This sets the stall out for what you should expect from the album – Americana inspired punk rock with a vocal that is part Dave Hause and part Laura Jane Grace and is a really big selling point for Reconciler. The mid-tempo pace along with some easily accessible lyrics and a catchy chorus ensure that you'll be singing along from start to finish. This is followed up by Constant. At just over a minute and a half long I was kind of surprised Reconciler would put a song so short so early on the album. It works really well though. The pace is upped and Lazzari's vocals seem to have a bit more aggression about them. This perks the album up immediately and has you wanting more already. Constant also flows brilliantly into the third song, All We Have. On my first listen through of Set Us Free this song really stood out. It starts reasonably slowly but soon builds up into a melody-infused song that has this brilliantly infectious tune that you will be humming for days. All We Have is about not having much but appreciating the memories that you hold close to your heart. The song is really uplifting and leaves a big smile on your face.

There is a moody tone that opens the fourth song, January. The slow way in which the song begins and the muted background music underneath the vocals ensure that you pay full attention to Lazzari's vocals which really remind me of LJG on New Wave. It's a plodder but another stand out that is about trying to keep a relationship together even though you know it's falling apart. Things pick back up on the following track Just Say It. If you're a fan of The Gaslight Anthem, I have no doubt in my mind that you'll really enjoy this song. A repeating trick that Reconciler seem to do is to start songs out with some guitar and vocals before they bring the full band in, this is a sure fire way of getting a listener's attention – particularly live. The song is about having the strength to talk about things that are troubling you and putting on the facade that you find it easy. The sixth song, Rust, presents a heavier side of Reconciler. The tone of the opening guitars feels angrier and Lazzari seems to be straining his vocals slightly, adding more emotion to the song. The tempo is upped slightly too which gives it more urgency. This is a break up song as Lazzari laments the things that he's messed up in a relationship and wonders what might have been. The higher tempo continues on the following song, Take It Away. Feeling more like a straight punk rock song that anything else up to this point, it helps give Set Us Free a bit of an adrenaline boost. I loved hearing Reconciler mix up their sound here, doing a great job in keeping me interested in the album. There's a great section in the final portion of the song that's instrumental and sounds like it's going to lead into the next track but in fact it builds into a final ferocious salvo to finish the song.

Just Wanna Play Rock 'N' Roll is an upbeat track about music as an escape from all the rubbish that comes from life. I really loved the positivity in the chorus. Screaming out the lines "I just wanna play rock 'n' roll" will offer the listener a great deal of catharsis and will certainly put plenty of smiles on people's faces. I also enjoyed the final bridge of "this is a sound to wash away the anger, this is a hope that we can find peace." Really powerful lyrics. This is Reconciler's anthem. The ninth song on Set Us Free is titled Don't Cry. After the upbeat nature of the previous track, Don't Cry slows things down dramatically and almost sounds like a stadium rock tune. It's a song that slowly builds throughout its duration, it doesn't rush itself but when it reaches its climax it's certainly worth it. The penultimate song is titled Not What I Used To Be. Picking things back up the introduction of the song quickly had me dancing in my seat. Vocally, Lazzari's delivers the lyrics with a nice tempo and a wonderful melody that brilliantly gets you swept up in the song. Not What I Used To Be is about growing as a person and changing the way you are. It's a track that overflows with positivity and I really enjoy that. Finally we have Damn The Weather. The track is screaming out to be sung along with as about three quarters of the song is just guitar and vocals – Lazzari really puts on an impressive display here. What a great range he has. The slow build in the song creates such a great feeling of tension that the moment when the full band comes in really feels like a special moment. What a big way to finish off Set Us Free.

Set Us Free is a fine album. It's an emotive punk rock record that's full of smart and powerful punk rock anthems you'll be wanting to sing along to – loud and proud. Definitely an album for fans of Against Me!, The Loved Ones and The Gaslight Anthem.

This review was written by Colin Clark.
Posted by ColinsPRW at 17:56:00