Album Review: What An Awful Life by Captain Asshole

The other day I had a day of feeling super depressed. I'd lost someone who holds a big place in my heart, I'm really concerned about some more people I love, work has been running me into the ground and I fell down the stairs. I basically had a day of sitting around in my pyjamas being really unproductive. Trying to at least attempt to do something productive with my day I stuck on an album that had been sent to me a couple of days before. Man, did this get me out of my mood! I first heard of Germany's Captain Asshole after they were announced for Hamburg's Booze Cruise Festival in June. I hadn't had a chance to check them out yet, then the band’s bass player Maximilian sent me an advance copy of their upcoming debut What An Awful Life. This was my chance. I loved this so much from the very first listen. Here's why. 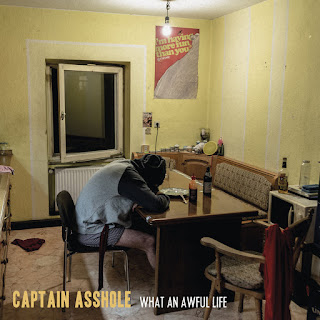 What An Awful Life begins with the song Kyoto Wa Doko Nan Da. Here we are greeted with some youthful sing-along gruff pop punk. The thing that immediately caught my ear was the use of gang vocals throughout the song. During the times where there is just the one singer it gives the song an extra piece of emotion that will seriously tug at your heartstrings. The song talks about feeling that life is suffocating you and is passing you by. Up next is Old Habits Don't Die. The track opens at a mid-tempo pace with some warming guitar tones before the vocals come in and there's a bratty pop punk vibe about it. Switching between solo and gang vocals adds to the energy on the verse and by the time the song reaches its chorus we are treated to the most glorious part of the song. This melodic gang vocal style is 100% what I love in this sort of punk rock. Captain Asshole sing about trying to break free of old habits and getting back up if something knocks you down. Finishing up the song, Captain Asshole slow things back down and show off their skill at harmonies with a big finale that I adored. The third track is titled Iron Out The Kinks. This high tempo song goes down more of a garage punk road with buzzing guitars and slightly distorted vocals. Keeping their pop sensibilities with a catchy melody and chorus, Captain Asshole show that can dabble in different styles and still sound like Captain Asshole.

Sunday Morning has a pretty epic opening that leads into a verse that goes off like a bullet. Channelling their favourite skate punk bands, you strap yourself in for what you think is going to be a relentless ride. But no! After that verse Captain Asshole switch to a gang vocal moment that continues for the majority of the song. Sunday Morning is about feeling terrible after a night out and wondering why you continue to do it to yourself. The massive amount of gang vocals on the song really give the song a sing-along vibe that will work so well at a Captain Asshole gig – I can't wait to see them live. The fifth song is named Face Him! Yo Dude. Are You High? This song had me dancing from the outset with a great guitar riff. This is one of Captain Asshole's more pop punk sounding songs but it's actually quite a sad song. It's about being beaten up as a youth and regretting not fighting back. The chorus is the highlight, I found myself singing it to myself long after the song had finished. The following song is titled Tony Hawk's Pro Skater 2 Had A Really Good Soundtrack. Before even listening to the song I had an inkling that this song would be about getting older and trying to cling onto things from your youth. Nailed it! The song is upbeat and up-tempo and quickly put a smile on my face and I can already imagine a music video of a montage of the band's youth. Something I quite enjoyed is the false finish that comes at the midway point of the song. There's this rambunctious guitar part that makes it feel like the track is coming to the end but it just keeps going and going for the final minute of the song where the band sing about being happy to get nostalgic and remember great times.

Holiday Inn is the title of the seventh song on What An Awful Life. For those who don't know, the Holiday Inn is the name of the hotel that serves as the hub of operations at the punk rock mecca in Gainesville known as The Fest. This is a love song, where the band sing about meeting a girl at the festival and hoping to meet her there again. This is the poppiest song on the album, perhaps not too surprising given that it's a love song. It also seems to feature less of the gang vocals which gives the track a much more personal feel and works well given the subject matter. Up next is Same Old Streets. On this song Captain Asshole tackle the subject of getting out of your hometown but knowing all the things you love about the place will still be there when you return. The chugga chugga approach to the guitars really allow the first verse to fill the song with an infectious energy that builds up and is then let out in the form of some more marvellous gang vocals. Up next is No More Spanish Love Songs which features a special guest in the form of Arliss Nancy's Cory Call. It's about realising that drinking and smoking an excessive amount isn't all that it's cracked up to be. Call's raspy vocals really shine, particularly in the gang vocal segments where they add a gruffer layer, perhaps due to the effects of smoking and drinking? Imagery.

The tenth song on What An Awful Life is titled I Literally Have No Idea What The Fuck I'm Doing. This is a track full of self doubt and anxiety as Captain Asshole sing a song where they wonder if they deserve what they have and will they make a mess of it. This is a feeling that many of us get so singing along offers a certain amount of catharsis to the track. The poppy guitar sounds that open the track really invite you in and, again, a massive amount of gang vocals really make you feel included. The penultimate song is named Home Alone. On my first listen of the track the lines "I'm so fucking sick of waking up alone, the only way to solve this is by never going home" really caught my attention. The song has a big overtone of sadness but is also very fiery, especially the song's finale as the lyrics are shouted in an almost aggressive manner. This is one of those songs that will lodge itself in your head and you'll find yourself singing it to yourself for days. What An Awful Life finishes with what could be its best song. On Fuck You Andy, Captain Asshole really channel their obvious love of midwestern punk rock with this absolute banger of a song. The song plays about with different tempos that keep the song interesting. With a fast paced verse giving the song its energy before the band slow things down for an almost chanting section that leads into this huge finale that feels so powerful. What a way to finish the album.

Simply put, this is an album of the year contender. What An Awful Life is an amazing work. Good job Captain Asshole.

This review was written by Colin Clark.
Posted by ColinsPRW at 16:16:00