Rough Dreams are a four-piece from Knoxville, Tennessee, who formed in August 2018. At the beginning of January, they released their debut self-titled EP. Featuring four emotional pop punk tunes, I took an instant liking to this debut. 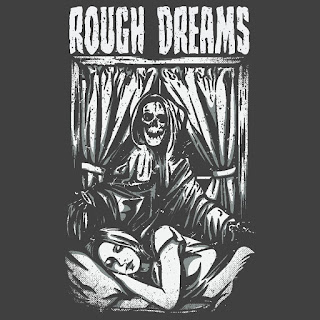 First up is a song called The Cold Sweat Shakes. This is a mid-tempo song that packs plenty of melody into its 3 and a half minute duration. Musically it doesn’t strain far from the the emo-meets-pop-punk vein but it’s the vocals that really stood out to me. Sounding just a little rough around the edges – in a good way – and perhaps more akin to an alternative rock sound, they really bring something special to the band’s sound. The Cold Sweat Shakes is about how certain songs or albums can remind you of the past which can bring pain but can also be a comfort. ‘And it's the songs that move me, But it's the pain that is so soothing.’ Jack And Jawbreaker is the next song of the EP and it is probably my favourite. After a chugga-chugga guitar-heavy intro, the first verse hits at a steady pace and builds towards a super catchy chorus – ‘I’ve been awake all night draining pens and ink, Words are pouring out, no one's listening, If this is who I am and who I'm supposed to be, Then open up and tell me why the best of me, Is not enough for you.’ The vocals are distinctly emo-pop but the guitars bring more of an indie punk sound to the song which has me wanting to dance. The song also features some killer harmonies. What more could you want?

Rough Dreams describe themselves as ‘spacey pop punk’ and I can sort of hear what they mean with the third song, Goodbye For Now. The effects on one of the guitars certainly do sound a bit spacey and those distinct vocals, when they come in with the first verse, compliment this sound wonderfully. The song is about the difficulty of having to say goodbye to someone, possibly a loved one. There’s a sad and nostalgic feel threaded throughout this EP and this song is certainly no exception. Thankfully for Rough Dreams, sad nostalgic songs are often some of my favourites. This might only be a four track EP but that doesn’t stop Rough Dreams pouring everything they’ve got into the last song and ending things in style. Her Name Was “The Road” feels like an album closer, let alone an EP closer. Starting out slowly and methodically, this is lengthy song that builds and builds throughout its duration. The vocals are packed with emotion throughout the first few verses and this culminates for a powerful and hard-hitting, singalong-able chorus – ‘Then she said, "You're a no good son of a bitch with a fear of love and a death wish”, I had to agree. I had to agree. Then she said, "You're a no good son of a bitch with a lust for life and you'll never quit”, I had to agree. I had to agree.’ Following the chorus is more of that spacey guitar style, this time with a full on guitar solo. It’s pretty epic and leads us nicely back into that superb chorus again.

What a great debut EP this is! If you want to check it out for yourself, you can do so on Bandcamp. The band are also releasing a 7” vinyl version of the EP on Coffin Curse Records this Spring. Be sure to like Rough Dreams on Facebook for more details.

This review was written by Emma Prew.