Album Review: Never A Dull Movement by Kid You Not

Kid You Not are a four piece punk rock band from Saint Augustine, Florida. Since forming in 2015 they have released the EPs Almost Home and Nothing Was Beautiful And Everything Hurt. Now they are about to release their debut album Never A Dull Movement on Deep Elm Records. I stumbled upon the band whilst checking out bands who are playing The Fest this year and loved what I heard. When the opportunity to get an early copy of Never A Dull Movement arose, I jumped at the chance to give it a review. 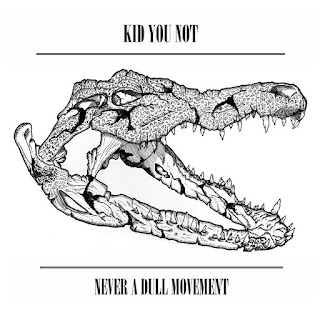 Opening song Heaven For The Climate Hell For The Company is an excellent indication for what to expect sonically from Kid You Not. This band is hugely influenced by Long Island punk rock heroes Iron Chic and have taken their melodic punk sound and really made it their own. The track actually starts off solely with front man Patrick Drury's excellent vocals before we are treated to a fantastic fists in the air anthem. The gang vocals really give the song an all inclusive element that fans at a Kid You Not gig will actually adore. Up next is There's No Crying In Baseball. Here we have longer musical intro with some huge sounding pounding drums before Drury's forceful vocals kick in. The music at the start helps the song to build nicely into the vocals and when they hit you get the sense that it's time to have some fun. The song is about learning from your mistakes and moving forward no matter what obstacles are thrown in your way. Third song, Me And Dead Owls Don't Give A Hoot, is another fists in the air banger that will get you shouting at the top of your voice. Kid You Not are clearly very good at writing this type of song. There's something about this track, and the other ten on the album, that are just instantly accessible after the first listen. There are more hooks here than there is in a fishing equipment shop.

It's Not Years Honey It's The Mileage is up next. This song manages to have a more understated feeling to it despite also being a big sing-a-long. How the band have managed that I do not know. The song is about feeling like nobody understands where you're coming from and trying to find that place where you feel like you belong. As soon as the fifth song Smoke Another Beer began I thought of The Bouncing Souls and when Patrick began to sing Spraynard popped into my head. It seems as if Patrick is elongating his words as he sings, this adds some urgency and emotion into the vocal delivery and I love it. Smoke Some Beer is about going after your dreams and finding yourself even if you think it might fail. The line in the song that really caught my attention was "We've Made All These Plans But We Don't Do Them." I'm sure that many of us have made massive life plans but been too scared to follow through with them. This is a positive song that aims to inspire the listener and this is something I can get fully on board with! Nothing Is The New Black really shows off Jeremy Austin's ability behind a drum kit. The beat really powers the song forward and almost feels like it's carrying the melody of the song and the guitars are providing the back beat. After saying that I do also really love the guitars on the song, there's a simplicity to them that injects the song with plenty of energy. Following Nothing Is The New Black comes the song You Know What I Like About Rich Kids? Nothing. Kid You Not have some cracking song titles. The guitars here are absolutely superb with Patrick and fellow guitarist Ben Bennett trading lines brilliantly. The song is about finally being able to fight back against people who have held you down in the past. Again I'm sure you've encountered people who have held you down in your life and being able to get some measure of revenge on them is a very satisfying feeling. There is a lovely section where the music drops out and we are treated to some gang vocals before the song's last big chorus brings this show home.

Be A Lot Cooler If You Did continues with the sounds that Kid You Not have really excelled on throughout Never A Dull Movement. It strikes me at this point of the album that the band never really slow down during its duration. The pace is constant and makes the whole album feel extra powerful. Be A Lot Cooler If You Did is about living in denial and not learning from your mistakes. "Every Morning I Wake Up And It Hurts Just A Little Bit More, Stop Me If You've Heard This One Before, Another Story To Make Up And A Feeling You Can't Ignore, Lies We Tell Ourselves To Keep On Going" may well be my favourite lyrics on the entire album. The penultimate track is Never Tell Me The Odds. What a great song this is! From the very beginning of the song you just have a gigantic urge to stick your fists in the air (this makes reviewing tricky, typing with one hand is hard) and shout until you are hoarse. The best part of a very very good song is of course the movement when the gang vocals kick in on the chorus. The atmospheric sound is fantastic. If I had a penny for every time I've said this in the past I'd have a big collection of pennies but gang vocals are magnificent for giving a song an inclusive feeling between the band and the listeners - and I love it. The tenth and final song on Never A Dull Movement is No Shirt No Shoes No Dice. This song starts off in blistering fashion giving the feeling that Kid You Not are putting everything they possibly have left into this final song. The guitars are speedy and the drums sound like they are being hit extra hard. This is another song about searching for who you are and finding something to believe in. The final few lines are absolutely amazing and it is just super empowering to listen to and shout out loud. "One Voice, One Reason, One Choice No Regrets, We Just Want, We Just Want, We Just Want Something To Believe In!" Maybe these are my favourite lyrics on the album?

When I first heard Kid You Not I was a little concerned at just how much they seemed to sound like Iron Chic. I'm sure they're told this a lot. But after listening to Never A Dull Movement I've discovered that Kid You Not are so much more than a band that sound like a band they're influenced by. There is a fantastic energy and passion about the music, it's obvious that the band really care about their music and the messages that they are putting out. I'm 100% behind this. This is an album that had me hooked from beginning to end. After listening to their first two EPs and then this album, the progression is outstanding. Kid You Not could well be the next big breakout American punk band.

This review was written by Colin Clark.
Posted by ColinsPRW at 16:27:00