Hightower are a punk rock band from Paris who formed in 2012. The five piece, like many of their contemporaries, grew up listening to and are heavily influenced by the finest of 90s punk rock. In 2014 Hightower released their debut album Sure. Fine. Whatever. and this month saw the release of their second album Club Dragon on Krod Records. Let's see what it's like. 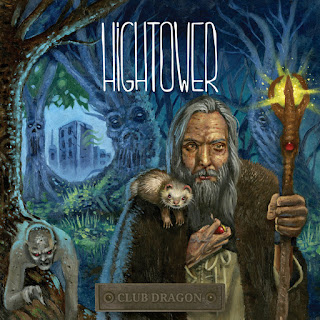 Club Dragon begins with the song Numero Uno. Taking me slightly by surprise the song starts out with some soft acoustic guitar before some reverb from an electric guitar lets us know that business is about to pick up. Musically Hightower play modern pop punk music with a bit of an edge. Unlike a lot of pop punk, there isn't really a chorus to the song but there are plenty of hooks and a great breakdown that will grab the listener's attention. Mushrooms And Bamboo is about learning from the mistakes you make and pushing through until you get it right. For what is on the surface a pop punk song there is a heaviness to the track musically with lead vocalist Attila's voice doing a wonderful job keeping a melodic pop sound to the song, as well as carrying its melody. Ernest's Castle is a short song at only fifty-eight seconds long. The track does a great job in packing in a lot during its short duration however. Sometimes shorter songs are the best way to get your message across. The message here is to watch your back because there's always someone ready to try and bring you down.

The fourth song is named The Party and was also Club Dragon's lead single. This was a great choice as it's definitely one of the stand out songs on the album. The Party starts out in a gloriously punchy fashion on the opening verse before we get a joyously melodic chorus. After the opening punchiness this chorus just puts a smile on your face and makes you feel wonderful. This is the song that gets you dancing and singing with strangers in the pit. Up next is Hedonic Treadmill. Hightower slow things down for this song, making it sound more reminiscent of an alternative rock track. I like this switch up of sounds - it shows some great variety in the band's songwriting. This slower approach to the song gives it an emotional layer that has perhaps been lacking in the previous songs. Tournesol brings us to the halfway point of the album. The introduction of the song features some good stop-start tradeoffs between guitars and drums with a little bassline thrown in for good measure. Turning towards a more melodic hardcore sound here makes the sound song huge. Attila's vocals soar during the slower paced sections of the track and sound fantastic.

The second half of the album opens with Titty Twister. Titty Twister is a positive song that tries to teach the listener to live your own life and not to conform to what is expected of you if it doesn't feel right. This topic isn't really anything new from a punk band but the point can never be made enough if you ask me. The track goes along at a mid tempo pace and this does a great job of getting the point across without feeling too laboured. There is a fantastic breakdown during the song that almost makes you believe that the song is finishing before a big ending. To The Hole is an instrumental track that works as an introduction to the ninth song Kind Of Blue. To The Hole really darkens the mood before Attila's vocals kick in early on Kind Of Blue and things explode into life. Kind Of Blue is about ignoring all the propaganda that can be forced onto you and learning to think for yourself. In a time where there are so many crooked politicians making big decisions this thought process is more important than ever.

Lov' Pyramids reverts back to the pop punk sound that Hightower played early on Club Dragon. Lov' Pyramids kicks off with a couple of big sing-a-long choruses that will instantly get a live crowd singing along. I kind of felt that they needed some gang vocals to give the start an even bigger sound. I have to say the lack of gang vocals on the whole album was slightly disappointing, but that might just be because I'm very partial to a gang vocal. The penultimate track on Club Dragon is Kvlt. This song begins with some very quiet guitar before some very loud vocals that really show off the strength of Attila's vocals. This was such an interesting way to start off the song. I was fully expecting a slow build with the guitar increasing in volume before the expected burst into life but Hightower jumped to the gun to great effect. Kvlt also has a section that really allows drummer Romain to showcase his considerable skills behind the kit. The twelfth and final song on the album is the epic Cheyenne Mountain. Cheyenne Mountain finishes off Club Dragon in fine form. At nearly five minutes in length it's easily the longest song on the album. It feels as if Hightower put everything they possibly could into this final song, not wanting to leave anything in their metaphorical locker. I enjoy an epic final song and this is up there with some of the best.

I'm the first to admit I'm not the biggest fan of this style of pop punk music but there was something in Club Dragon that really pulled me in. If you are a fan of the modern era pop punk sound you will adore this album and Hightower.

This review was written by Colin Clark.
Posted by ColinsPRW at 12:22:00