Album Review: Call In Sick by Toodles & The Hectic Pity

I love it when small bands I've never heard of send me emails asking if I'd like to review their new release and it turns out to be one of your favourite releases of the year. That's definitely what happened when Bristol based three piece Toodles & The Hectic Pity got in touch (hello@colinspunkrockworld.co.uk if you're interested) and told me about their new release Call In Sick which was released in June via Invisible Llama Music. Toodles & The Hectic Pity consist of Callum McAllister (vocals, acoustic guitar), Max Cole (bass, vocals) and Dom Mosley (drums, vocals, melodica) and play acoustic folk punk music. A genre I usually leave for Emma to review but I enjoyed this release so much I had to do it myself. Here's why I loved Call In Sick. 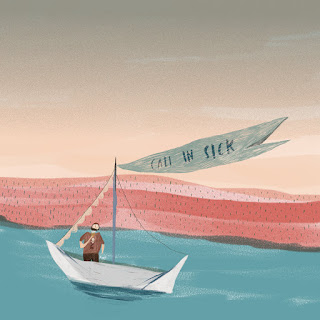 Opening song Menthol Cigarettes begins with some quiet acoustic guitar before the drum kicks in and we get a upbeat extended introduction to the song. When the vocals do kick in the drum drops out and the song builds up towards its chorus. I like the effect of having two introductions to the song that lead into a big sing-a-long chorus. Menthol Cigarettes is a break up song, particularly about struggling to let go of the relationship and not coming to terms with the situation. Despite the sadness of the topic there is such a great upbeat feel to the song, it's kind of difficult not to smile along to it. Next up is I Do Not Need A Doctor (Oh My Dear). The track doesn't waste much time in getting started this time with some fast paced acoustic guitars. McAllister's vocals are also up-tempo and have a hint of storytelling in their delivery. I Do Not Need A Doctor tells the story of a girl who tries so hard to fit into what society deems is the correct lifestyle and it driving her to sickness. There is a great section of the song when things are brought down to a slower pace and some well placed "whoa-ohs" come in before the song gradually picks itself back up for its ending. Superb song.

The third song is the EP's title track Call In Sick. Call In Sick is a song about being stuck in a job that you hate so much that it begins to affect your mental health. The track goes along at more of a mid-tempo pace with McAllister again in storytelling mode. I can see this song really going down well in a live environment, especially when the music cuts out and the line "Because You Shouldn't Have To Work So Hard To Barely Get You By" is sung, in my head I'm imagining a room full of people shouting this back at the band in a very cathartic moment. The penultimate track is named Faster Than This. As you might assume from the title of the track, it's a fast paced one that's just two minutes in length. It's a bit of a punk anthem about realising your own self worth and ignoring the people who don't respect yours. Faster Than This is a track that really allows Mosley's drumming to shine with some rapid fire drum rolls giving the song an explosion of life. Lastly we have Ear To The Concrete. Here we have another mid-tempo track that tells another story. McAllister does a wonderful job of painting a picture in this, and all his songs, where it feels as if you can see what he's singing about as if it's a film. This is an incredible skill and shows so much songwriting talent.

Call In Sick is one of the biggest surprises of the year. All five songs are just superb and deserve a lot of attention. Toodles & The Hectic Pity have not been a band for a long time but are already showing a lot of promise. If you only check out one band that you've never heard of this year then you could do far worse that giving Toodles & The Hectic Pity a chance. You certainly won't regret it!

This review was written by Colin Clark.
Posted by ColinsPRW at 09:49:00