You may have heard that way back in April Emma and I made our annual visit to Manchester for Manchester Punk Festival. One of the bands that really caught my attention at the weekend were Oldham based three piece The Crash Mats. The trio played a fun mix of punk and ska music about various topics such as smoking weed, drinking, Neighbours getting cancelled, wrestlers and also threw in a cover of one of the greatest TV themes of all time - Chucklevison. This month they release a brand new album named 69 Peruvian Panpipe Classics on Horn & Hoof Records. I stuck it on expecting to be very entertained. 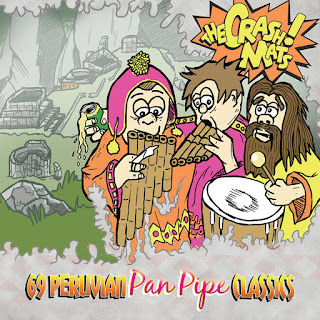 My favourite era for UK punk rock was probably the P-Rock era of the early 2000s, that's when I first really started listening to UK underground punk so it's a sound very close to my heart. When I first put on 69 Peruvian Panpipe Classics my mind was immediately filled with nostalgia for that time. The Crash Mats sound is a straight forward but in your face punk rock sound that has plenty of pop hooks thrown in as well as the occasional hint of ska. Think of a Northern 4ft Fingers and you get the idea. On the eighteen tracks on the album the band do show off some different sides of their sound, going from upbeat and fast to a darker hardcore sound. Production wise you can tell that this is a DIY release that they didn't have a big budget for studio but this only adds to the album's charm. This rougher, raw sound gives me the same feeling I had when I saw The Crash Mats live - it's a bit rough around the edges but it really doesn't matter because it's so much fun.

If you're expecting to be moved by some of the topics that The Crash Mats tackle then I'm afraid you're looking in the wrong place. Who says punk always has to change the world though? Sometimes it can be silly and fun. In a world where we are bogged down by so much rubbish, it's important to have some silly and fun music to help lighten your mood. Song topics include life in Oldham (Don't Go Down Yorkshire Street On A Friday Night, 409 Home), love (Hot Air Balloon Ride, My Girlfriend Only Has 24 Hours To Live), wrestling (Terry Funk Forever, Mr Wonderful) and Neighbours (Party At Lou's Place).

This is such a fun album. I've listened to it quite a few times whilst writing this review - the songs are pretty short - and each time it has had me smiling. The songs are short and sweet, doing what they need to do with minimal fuss. Musically it's very well played, keeping it quite simple the majority of the time but throwing in some excellent bass and guitar solos along the way. I hadn't appreciated the band's skills as musicians when I saw them live but hearing them here I am very impressed.

If you love your punk fun, if you like your music to make you smile, if you want some brilliantly ridiculous songs to get stuck in your head, if you miss the p-rock days or if you love a good drunken party then 69 Peruvian Panpipe Classics is the album for you.

Also if you listen all the way to the end of the album there is a nice surprise for you.

This review was written by Colin Clark.
Posted by ColinsPRW at 08:07:00