Bash Brothers are a melodic punk rock band from Eksjö, Sweden. Since forming in 2015 they have released a self titled EP and more recently their first full length named Life Lessons. Life Lessons was released on June 1st by Thousand Island Records and Less Talk, More Records. 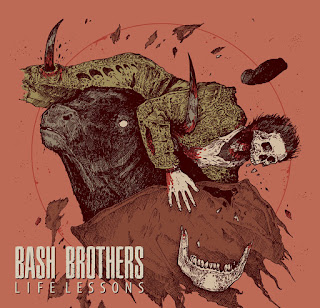 Life Lessons begins with the song Falling Down. It expertly takes the technical guitar style that is oh so popular in punk rock at the moment and adds a nice amount of aggression to it. I find myself caring about the song instantly because of this. The ending of the track is a particular highlight with things slowing down slightly, allowing a big sing-a-long finish. A Part Of Me starts off very quickly with a guitar riff that wouldn't sound out of place on a metal album. The drums in the introduction are really something else as well, really driving the song forward with a lot of power. A Part Of Me combines the techie guitars with some incredible soaring vocals from Johan Engdahl. Towards the end of the track there is a fun breakdown section that will get plenty of heads banging before one last flourish to end the song. The third song is titled Gone Forever. This song is such an interesting listen. Musically it's super fast and hard but the vocals are quite slow and melodic. The two different tempos create a fantastic effect and flow together effortlessly. This is the first time on the Life Lessons where Engdahl really lets loose with his vocals and lets out some huge hardcore screams that add even more life to the song.

The next two tracks on Life Lessons feature a very special guest. None other than John Harcus from Scottish punk rock band PMX. Just Like You is an absolute beast of a punk rock song. This ferocious track mixes the best of hardcore, skate and melodic punk with a little bit of pop in the chorus that will be placed firmly in your head for days to come. Keeping Me Awake is possibly my favourite track on Life Lessons. Starting out in quite a measured way, Keeping Me Awake shows Bash Brothers in quite a restrained mood. That is of course until the songs builds towards some more terrific screaming which gives the song a huge heap of emotion. The tempo of the track has moments where it increases briefly, giving a sense of urgency before things come back under control. This is one of those songs that takes you on one hell of a ride. The sixth track is the album's title track - Life Lessons. I always think that when a band uses a song title for the name of the album that song needs to be one of the highlights of the album. This song is certainly that. Well, the song has a big Pennywise sound to it so that makes it a highlight just for that. There is a positive and uplifting feeling to the song that really inspires. I like that in my punk rock tunes.

Suit Yourself has an intro that fills you with energy immediately. This is a fast paced song that barely pauses for breath throughout its time span. When it does it only serves as a build towards an explosion at the end. The use of different vocal styles on the song does a great job of breaking the songs into sections so it doesn't become monotonous. You Are Fading Away is a song about watching someone you care about slowly dying and reassuring them that you'll be there for them. The song is full of emotion and makes you really care about, not only the song but, the people involved. The lyric that really stands out throughout the song is "I Can't Stand The Thought Of You Fading Away, I Will Be There For You Each And Every Day." The penultimate song is named Spending My Time. Starting out in an ominous fashion before the drums help ignite the track. After a fairly extended intro we get some more urgent and intense vocals, potentially the most intense of the entirety of Life Lessons. Last up is Immutable Change. I had no doubt in my mind that this album would finish with a bang and my assumption was proven to be dead on. Immutable Change does what I think Bash Brothers do best - mix melodic, skate, hardcore and pop punk into a pot and come out with a fantastic piece of work. That uplifting feeling of Life Lessons is back as the band sing about making permanent changes for the better.

Life Lessons is a strong effort from Bash Brothers. The European punk rock scene is heavily littered with many amazing melodic punk bands and it's fantastic to hear a newer band make just as good an impression on me as some of the more established acts in the scene.

This review was written by Colin Clark.
Posted by ColinsPRW at 12:11:00