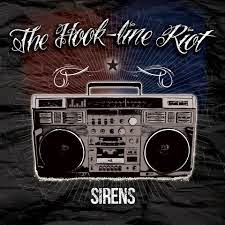 The Hook-Line Riot feature members of a band that I absolutely love named 4ft Fingers. When bands form featuring members of another band it’s always difficult not to compare the two. That’s something that I am going to try my very best to do here as The Hook Line Riot are a great band regardless of what band they are also known for.

Sirens, which was released in November 2013 opens with the track Calling All Cobras. This song really cements the sound of The Hook-Line Riot, punk rock for the thinking man. Restrained, heartfelt songs which will also get a crowd singing very loudly. Calling All Cobras is about getting all of your friends together to look after a friend who is in a bad way. The lyrics “we will live, we will fight, we will sing into the night, all my brother cobras it’ll be alright” are ones that I really like. It’s a reminder of whenever life gets you down you’ve always got your friends to get you back up again. 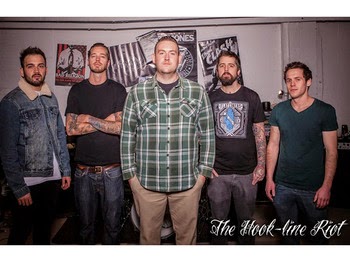 Take No Time is another uplifting song. It’s a song encouraging you to go after what you want no matter how far away it seems, you will get there if you work hard enough for it. This is the shortest song on the album and is quite catchy. The use of the Hammond organ gives the song another layer and really helps create the fantastic sound The Hook-Line Riot have created.
Track three is called Chances and is about trying to help someone who repeatedly lets you down. The maturity of the band shines through on this one, I’m guessing like most of us they have wondered down the wrong path once or twice in their lives and have had or even needed someone to give them another chance.

She Will Never Know is a break up song (it says so in the opening line, made my reviewing much easier). It’s one of the faster songs on the album and features some fantastic drumming, really carries the verse along nicely. Towards the end of the song there is a nice punk rock “let’s go!” before a fantastic guitar solo.

Black Eyes and Broken Hearts starts off with lead singer Rob in sombre mood as he sings the opening verse of the song. As you may guess it’s a song about the very serious issue of relationship abuse and the view of an outsider looking in. Some of the lyrics in this song really hit the nail on the head and are quite emotional “do you remember when your life was free of fear and your nights didn’t end in tears” and “it just breaks my heart to see you cry, wonder why you choose to live a lie.”

This emotional song is followed by Fat Cats & Underdogs. This is a song about having to work for the big corporate giants and being treated badly, something many of us will relate to. It’s about working your socks off and still having no money to show for it. The Hook-Line Riot encourage you to stand together with your work mates and fight against the “Fat Cats.”

The second half of Sirens starts with a song named I Can Say and is a love song. The grumpy single punk rocker in me would normally complain that it’s too soppy but it’s hard not to smile when listening to the lyrics. They are ridiculously heart-warming, even the hardest of punks would get a but mushy after hearing it. Who doesn’t want “that funny feeling that carries on and on all night until the break of dawn?”

Up next is title track Sirens and is a story of the things you will do when you’re in love. It tells the tale of a couple of who decide to rob a bank so they can live together comfortably. It starts of slowly, setting the scene for what’s about to happen before kicking into a chorus that will get stuck in your head instantly. Very interesting version of the love song.

Declaration Of My Disconnection was an instant favourite of mine. This is a protest song against over use of social media. Rob sings about people struggling to interact with people face to face as people spend too much time doing it behind a screen. There is a good instrumental when the organ shines again before a building break down of “I wanna leave it all behind and analog has always done me fine, I wanna leave it all behind I wanna talk face to face this time” before a rallying cry of a chorus “this is my declaration of my disconnection.”

The next song, Rely On Me is about fatherhood. Not being a father myself I can only guess on how it feels. I think The Hook-Line Riot probably get it spot on in the chorus “I couldn’t ask for anything from a boy, I’m glad to call my son, I’ll watch you grow into a man, my son I love you and I’ll always watch after you, you made me into the man I am today.” Really mature song writing here and I’m positive all the dads will relate.

The penultimate song is Waiting Room Exit. It’s really picks the pace up after the slow burning nature of Rely On Me. The bouncy structure of the lyrics brings the song to life and really catches your attention. The song itself is another about a very serious subject, the issue of deciding whether or not to end someone’s life. It’s about the different emotions people feel whilst at somebody’s death bad whether its ending someone’s pain or saying final goodbyes. For such a serious and sombre song lyrically it’s also the poppiest song on Sirens.

The album finishes off with Turn It Up! It’s about missing the old days and how music can take you back to some great moments. Everyone can think back to a great time in their lives and relate it to a song, whether it’s a gig, a wedding or even just a road trip where you and your mates belt out a version of Teenage Dirtbag.

The Hook-Line Riot have also created t-shirts in memory of the late, great Tony Sly. All profits are going to the Tony Sly Kids Foundation charity. Get one here: http://www.thehooklineriot.bigcartel.com/
Posted by ColinsPRW at 19:49:00