Album Review: Before The Fall by Paperjets 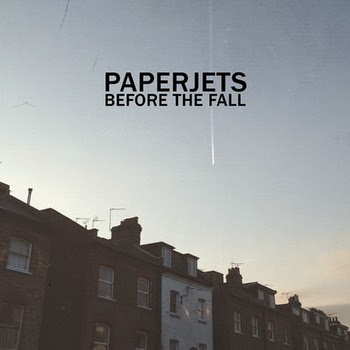 When you’re bored and sitting on your computer, laptop or tablet do you find yourself randomly just clicking on links and planning on going to one page and ending up somewhere completely different? I do and that’s how I found London’s Paperjets. I can’t remember what on earth I was looking for but whatever page I was on I noticed something that attracted me to the link. There was a picture of a band who I had never heard of before, but I recognised one of them. Not as someone I actually know but someone from a band that I love a lot. It was Sebby Zatopek from the Zatopeks. This excited me greatly and had to check out Paperjets. What I found was a great little pop punk band. In October 2013 they released their EP Before The Fall on All In Vinyl Records and Hectic Society Records. Here’s what I thought of it.

Before The Fall is also the name of the opening track on the record. It starts off with some fairly heavy guitar riffs before the singers sugary sweet vocals kick in. The song reminds me of American pop punk legends The Queers with the vocals sounding like they could easily fit on a Beach Boys record and back my a band who love The Ramones.

The second track on the EP is named Green Eyed Girl. This song is a high tempo number packed full of harmonies.  The pace doesn’t let up for the whole song and the lyrics are incredibly catchy. The bass also comes in quite strongly midway through the song and takes charge of the rhythm for a little while before a strong guitar solo is broken out.

Harmonies are out in force for the fourth song, Rescue Me. This song about a girl getting you out of a bad place is probably my favourite on Before The Fall. Musically it may be the most simple of the five but the hook really grabs your attention.

The final song on Before The Fall is called When By Boy Walks Down The Street. Lots more harmonies on this up-tempo song about being proud of being a father. This is everything you expect from a pop punk song, short, to the point and played at a break neck pace.

Before The Fall is a very solid first release from Paperjets. Taking that early 90’s Lookout Records sound they have created a release that would go down a storm twenty years ago and still does today. I am really looking forward to hearing more from Paperjets.