We last featured Chicago based ska punks Beat The Smart Kids early in 2019, reviewing their 2018 EP Set Sail. Apparently they are one of the most prolific ska punk bands in the States as they're already back with a brand new five track EP named Chicken Sounds. As soon as I found out it was released, I had to review it. 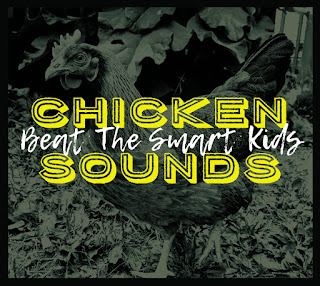 First up is Quicksand. After five seconds of quiet chicken sounds, the song gets started with some big horns beginning things in a big fashion. When the vocals come in, we are treated to that standard ska guitar upstroke sound we all know so well. I loved the vocals on the verse, the main singer reminds me of Dave Kirchgessner of Mustard Plug and he's accompanied by a harmonised sound that you would expect from a hardcore singer. The chorus, as you might expect, is big and will have you singing along in no time at all – between all the skanking you'll be doing throughout the verse. Politicians is, you guessed it, a political song. In particular the band sing about how the politicians are really only out for themselves and not thinking about helping the people who voted them in. The song goes along at a nice high tempo for the most part which turns into a building segment for a huge horn part before the song sounds as if it gets even quicker. Obviously I loved that. This high tempo gives the song plenty of urgency and actually helps put the band’s feelings on the subject across. The production on the song is great, with the guitars and horns seeming a bit muted and the drums really driving the song forward whilst allowing the vocals to sound really clear.

Battleskars is an instrumental track that lets Beat The Smart Kids show off their own take on a more traditional ska style. The horns really take centre stage here and I can see this song being a crowd pleaser at one of their shows. The penultimate song is Cheers To The Underground. This goes back to the band’s own sound and features an exciting horn intro to get you going after the laid back style of the previous song. The track is a love letter to the underground scene and how much better being at a DIY punk show makes you feel. This song hit me pretty hard when I first listened to it as here in the UK we are six weeks deep into lockdown and I'm really starting to miss going to shows in our favourite local scene. It's a fun and positive song that makes me happy. Chicken Sounds is finished by Who Am I To Judge?. The song seems to mix a good blend of ska sounds, from traditional to third wave to a more skacore style, it has it all. The highlight for me were the dual vocals on the verse with both singers trading lines brilliantly. Each member of the band gets to show off their own considerable skill at their instrument as well throughout the song. The album is then bookended with some more chicken sounds. Perhaps just making the EP’s title make a little bit of sense.

Beat The Smart Kids are one of my favourite ska bands from the USA and Chicken Sounds might be my favourite thing they've released so far. Hopefully they can get a following in the UK and will be able to come tour here at some point. Check them out!

This review was written by Colin Clark.
Posted by ColinsPRW at 16:12:00