I first became aware of Greek punk rock band Hoi-Poi Farplane Wind when I saw that my friends in Forever Unclean were due to tour with them in the summer. Then they kindly got in touch about giving us a song to use on CPRW Records compilation supporting Music Venue Trust. After that Leo from The Overjoyed sent me a message asking me if I could review their new album Sain't Adorable which was released on their label Nasty Cut Records. So here I am, reviewing that album. 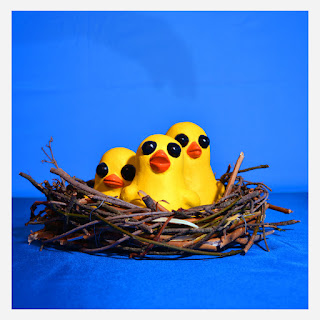 Sain't Adorable begins with Mal Ad Just. If you're unfamiliar with the band’s sound then this track is a great introduction. The band’s signature post-hardcore sound shines through on the track and gets the album heading in the right direction from the start. The track starts off with a rapid-fire drum roll accompanied by some guitar twangs before the song really gets going. Hoi-Poi combine two vocalists, a dreamier clean style along with a hardcore singer. That's probably not the best description but think Alexisonfire and you get the point. The song is about thinking about how you treat people and becoming a better person because of that. Busybody/Lazybones is a more conventional melodic hardcore track. The intensity is lowered, giving the song a more accessible feel if you're more interested in straight forward punk rock. There is such a sad and emotional tone to the track that it will really tug on your heart strings. The guitar solo at the beginning of Chief End really brings the energy back up and leads wonderfully into a high tempo opening verse. There are moments where the guitars get a little twiddly and slow things down, but this helps build up to the big dramatic moments littered throughout the song.

The fourth song, Life Wind, immediately stood out on my first listen through of the album. Opening with some great, powerful gang vocals which are accompanied by a subtle harmony. This was such a brilliant way to start the song. This technique continues through the opening two verses and had me itching to sing along. The middle section of the song is a dramatic instrumental which is then joined by a spoken word segment before building back up to the track’s big finale. This leads into Lude, which is an interlude for Sain't Adorable. This adds to the overall drama of the entire album and makes it essential that you listen to it as a whole rather than just select tracks. It leads into the song Whelming – another stand out song on the album that fits perfectly after Lude. Reverting back to a more straightforward style, the vocals are gruffer and more aggressive. This really helps you get invested in the track. It wasn't long before I found myself nodding my head along. It's about believing that you're invincible and that you shouldn't always try your best.

Rycorice is the seventh song on the album. Here's another song that gets off to an aggressive start. The song storms through its first half before we get to another longer instrumental moment. On previous tracks where Hoi-Poi have done this they've slowed things down. On Rycorice, they keep the tempo and energy up, creating an incredible ending to the song. It was built up into a ball of energy wanting to explode, ready and waiting for the penultimate song – Rest Embarrassed. The need to explode was soon granted as Hoi-Poi keep the aggression up for the opening of this track. They gradually bring things down to a calmer and more dream-like pace as the song progresses giving you a chance to catch your breath before another long and wonderful instrumental that leads you to the outro. I was not in the least bit surprised that Sain't Adorable is finished with a six and a half minute long song. This was the only way to finish this kind of journey. Titled For Now, Equanimity. So Long. this was actually my favourite song on the album. It's a moving piece of music that takes you on many highs and lows and keeps you captivated throughout. The song feels so deeply personal that I struggled not to get emotional whilst listening to it. The song is about getting cancer, struggling to deal with it and pushing people away. It's a sad way to finish the album but they also couldn't have picked a better song for it.

There's no getting around the fact that Sain't Adorable is a heavy listen. It will get you feeling all kinds of emotions throughout its duration. This is why I think it’s such an impressive body of work from Hoi-Poi. This is one of those albums that you need to listen to in full to really get the full picture but there are also a couple of tracks that really stand out and could work as stand alone songs.
Stream and download Sain't Adorable on Bandcamp here.

This review was written by Colin Clark.
Posted by ColinsPRW at 16:20:00