Album Review: Back To The Party by Sam Russo

It's been five years since acoustic punk troubadour Sam Russo released a brand new album. After touring 2015's Greyhound Dreams hard for a couple of years, Russo seemed to step away from performing live as much to crack on with new album Back To The Party. Released by Red Scare Industries, Back To The Party feels like such an apt title for the album. 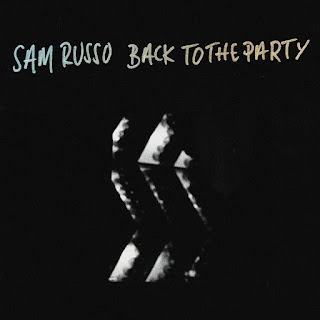 Opening with Purple Snow, hearing Russo's unmistakable vocal is like slipping on your favourite football boots. There's a comfort there that is built up over time and when you get to that level it will stick around forever, even if you don't wear them for a while. A better analogy is it's like being reunited with an old friend and things picking up from exactly where you left them long ago. You know what you're going to get from a Russo album but that doesn't mean you shouldn't check out Back To The Party.

While Russo predominantly plays acoustic guitar on the album, there are subtle additions and effects sprinkled throughout Back To The Party. To my knowledge, this is the most experimental Russo has gotten on any of his releases so far and it's a pleasure to hear. Some of the electric guitar effects add a fantastic amount of atmosphere to the album. Whenever I've seen Russo live, I've always been so impressed with how he manages to use his guitar as a percussion instrument as well as it's intended use. This helps to give his songs a great deal of extra energy. This translate well to Back To The Party, particularly on The Window, Young Heroes and Anne. Anne is a song that starts quite quietly but builds delightfully.

Russo writes some fantastic storytelling songs. The way that he uses his voice ensures he really takes you along for a journey. When he sings in a quiet and low register he has this ability to really captivate the listener and, when he lets go of the shackles and begins to belt his lyrics out, you can't help but want to sing along. Russo doesn't step away from his traditional stories of friendship and loss. On the surface, Back To The Party feels like quite a sad album but it does also offer a sense of hope. One of my big highlights on the album is The Basement. It's a song about remembering good times from a moment in your life after you have drifted away from it. This happens to be the album’s closing song and it feels like the best way to finish the album with a rousing chorus.

I've read a few reviews and comments saying that Back To The Party is Russo's best album yet and I am inclined to agree with them. It shows a slightly different step in musical direction but also remains completely Sam Russo. I assumed that the title of the album references Russo returning to the party but, after listening to the album a few times now, it could also be Sam welcoming us back to his party. Either way, I'm happy he's back. Hopefully the world will begin to fix itself soon so we can see these songs live as soon as possible.

Stream and download Back To The Party on Bandcamp here.

This review was written by Colin Clark.