Think of Finland and the chances are the first thing you think of isn't likely to be soaringly happy, melodic punk rock. Lapland and the Northern Lights, perhaps. Liverpool football supporters of a certain age might point to Jari Litmanen or Sami Hyypiä. But not punk, right? Step forward Custody – the melodic five-piece who've just released their second album titled II – making them easily the greatest Finns I know (sorry Liverpool fans).

They've been compared to a number of 90s bands that have a special place in my heart. Most notably Samiam and early The Get Up Kids, which I certainly see, and Leatherface, which I get less so (but there are so very few bands that could get close to Leatherface though, right?). Either way, what is certain for me is whilst I get the connection, they're by no means a weak imitation of any of these bands. 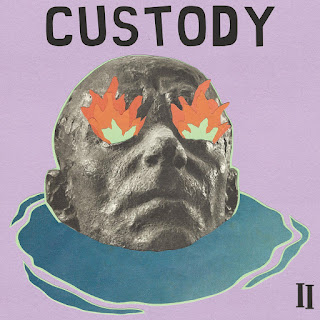 The first track on II is Silent Mutiny. It's not especially fast but it is a powerful song. A heavy drum beat and vocals build the song as they're joined by guitars and a great chorus and then an instrumental. I immediately catch myself tapping out the rhythm before I've even heard the whole song in its entirety, such is the powerful drum beat. I really love it.

Altered States then follows. This was the single that the band released online before the album. It's a real sing-a-long track with clear, distinct vocals, before She Said. This third track is one of my favourites. Fast, but not frantic, it builds then slows, twists and turns. Its chorus aching to be shouted in unison at a packed yet intimate gig.

Other stand out tracks for me are Get Rid Of It, Another Hundred Miles and Fall for Nothing – all with fabulous melodies and hulking guitars.

The album concludes with When I Keep You Close, a slower, more considered track and a comedown from the rest of the album. It's a nice way to finish, but it also gets me reaching to spin it again.

When I first heard Custody's debut album a few years ago, I made that mental note to try and catch them live if I got the chance. With this new album, the band have taken it up a gear to the extent that I now have them marked as essential to see live.

Like everyone else, their plans for touring this year have had to be ripped up. They were due in the UK before playing Booze Cruise in Hamburg where I was planning to catch them. Of course they'll be back and they've already said they'll be in Hamburg at Booze Cruise 2021. I've no doubt I'll know this album inside out by the time we get there.

This review was written by Chris Bishton.
Posted by ColinsPRW at 12:29:00