Album Review: Better Late Than Never by The LarryFish Experiment

When a band names themselves The LarryFish Experiment you know two things. Firstly, they are definitely going to be and ska punk band and, secondly, it's probably going to be a bit silly. Back in March, the Bristol based three-piece released their debut album titled Better Late Than Never. It's taken me far too long to get around to reviewing it (worldwide pandemics can be distracting) but, when I did, I realised it was something I desperately needed during the current climate. 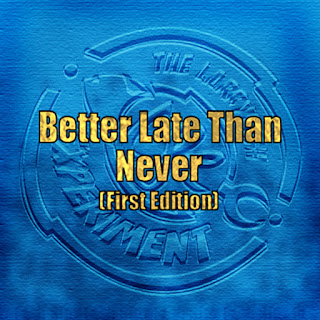 Better Late Than Never begins in a surprisingly dramatic fashion. It was only when the cries of "we have come here to do two things, skank some asses and chew bubblegum" that I was certain I'd clicked play on the right album. The album gets going properly on the second track – Sami's Afro. It's an upbeat ska punk song about a professional wrestler who has an afro. My knowledge of pro wrestling is pretty slim so the references are completely lost on me, but I still enjoyed the song. It's upbeat, silly and it made me want to have a dance despite not really knowing what on earth was going on. The third track is titled Paralytic. At first, I thought the song was about just getting a bit lairy on a Friday evening (which, in part, it is) but it's also about cutting loose and feeling better after a terrible week at work and the ability of live music to bring people together. The song is almost five minutes long so it's pretty lengthy but, when you get lost in it, the track flies by.

When I first saw the title of the fourth track, I really hoped it was a Lady Gaga cover. That would have been great fun. However the song Pokerfaces is not a cover. It's actually a positively messaged song about being who you want to be and feeling the need to fit in with people who think you're different. I enjoyed how the band switch from the upbeat ska sound on the verses to a harder punk sound on the chorus. This really helps hammer home the point of the song and gives it an empowering edge. Skankfish is an older LarryFish Experiment song. This is a reggae/ska summertime smasher that will get your knees up and put a massive smile on your face. It's not going to change the world of music but you will have a bloody good time whenever you hear the song. I'm all for having bloody good times so I'm all about Skankfish. Big Dan's is where the super silly side of The LarryFish Experiment comes out. Yes, there's a song sillier than Skankfish. It's about a night out with a down on their luck friend and the escapades that entail. I'll leave you to listen to the song and find out what they are. Musically, the song will get you skanking along and there are some great "wahoo" moments that you can easily shout along with.

The seventh song, Party Political Broadcast, is technically an interlude where the band get a bit electronical for a warning that the next song is a political track. That track is titled BNP so I'm sure you can have a bit of a guess as to what it's about. Long story short, the overall message is fuck the BNP – spread love, not hate. It's great to see The LarryFish experiment step away from songs about dancing and nights out and tackle politics. It gives the band a whole new dimension and makes them seem more than just a party band. Musically, they don't step away from their own style which I think makes the political song a lot more accessible for everyone. Up next is the song RKO. This is a short song that talks about the band’s love for professional wrestling. Despite only being forty-three seconds long, there are two very separate parts to the song. The first part of the song sees the band go all hardcore on us, before the second half delivers the most upbeat ska fun you're likely to hear. The penultimate song is Skankfish Strikes Again. Continuing the theme of the original Skankfish, it's about having a dance. This song has more of a punk edge to it, perhaps encouraging a rowdier skank. The final track on Better Late Than Never is titled Tweetie Pie. Good Gandalf this is a long song – it's nearly seven minutes long! It starts out in a ska punk style switching to a big rock sound that builds to an incredible three-part harmony section that I can't wait to see live at some point. It then jumps to what I guess would be described as a death metal howling section that will have you headbanging like your life depends on it to finish the song and the album.

This review was written by Colin Clark.
Posted by ColinsPRW at 12:20:00