Having just about recovered from Polite Riot Festival, Emma and I found ourselves back at the New Cross Inn just one week later for another day of punk rock fun. Oklahoma gruff punks Red City Radio were in London for the first date of their UK tour to headline another all dayer put together by the fine folks of Be Sharp Promotions, Umlaut Records, Kick The Crutches and Disconnect Disconnect Records. Originally there were nine acts scheduled to play but sadly Harker and Pacer had to pull out of the day at the last minute. Not to worry though as there were seven more bands ready to entertain us on a blisteringly hot Sunday.

First up was Guilhem from Canadian band Lost Love. Guilhem is in the UK on an acoustic tour and was playing his second London show of the weekend. Starting an all dayer like this with an acoustic act is always a nice way to ease you into the day. People were slowly arriving at the New Cross Inn so Guilhem got to play to a reasonably sized crowd for the time of day. It was nice that the crowd was respectful and quiet for Guilhem as he entertained the crowd with songs from his acoustic EP Bad Art, as well as a cover of The Weakerthans classic Plea From A Cat Named Virtue. Guilhem helped to start the day off well with a warm performance of some great songs. 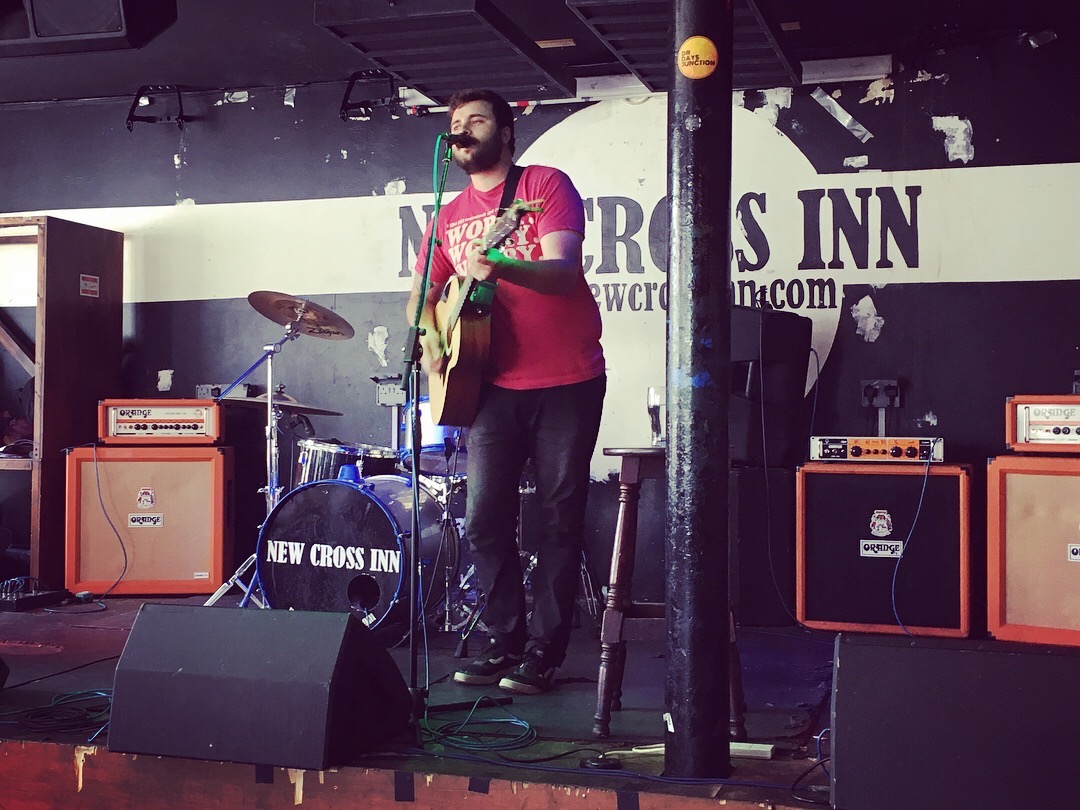 The New Heat took to the stage next and seriously impressed a lot of people. The four piece play a soulful Americana-esque form of punk rock similar in style to The Gaslight Anthem. Despite breaking a guitar string after just one song, the band powered through with a quick thinking change to the set list so that no time was wasted. Playing a selection of songs from their recently released debut EP We Said Our Prayers, The New Heat showed that they are definitely a band with a lot going for them and will surely become more and more popular whenever they play more shows. 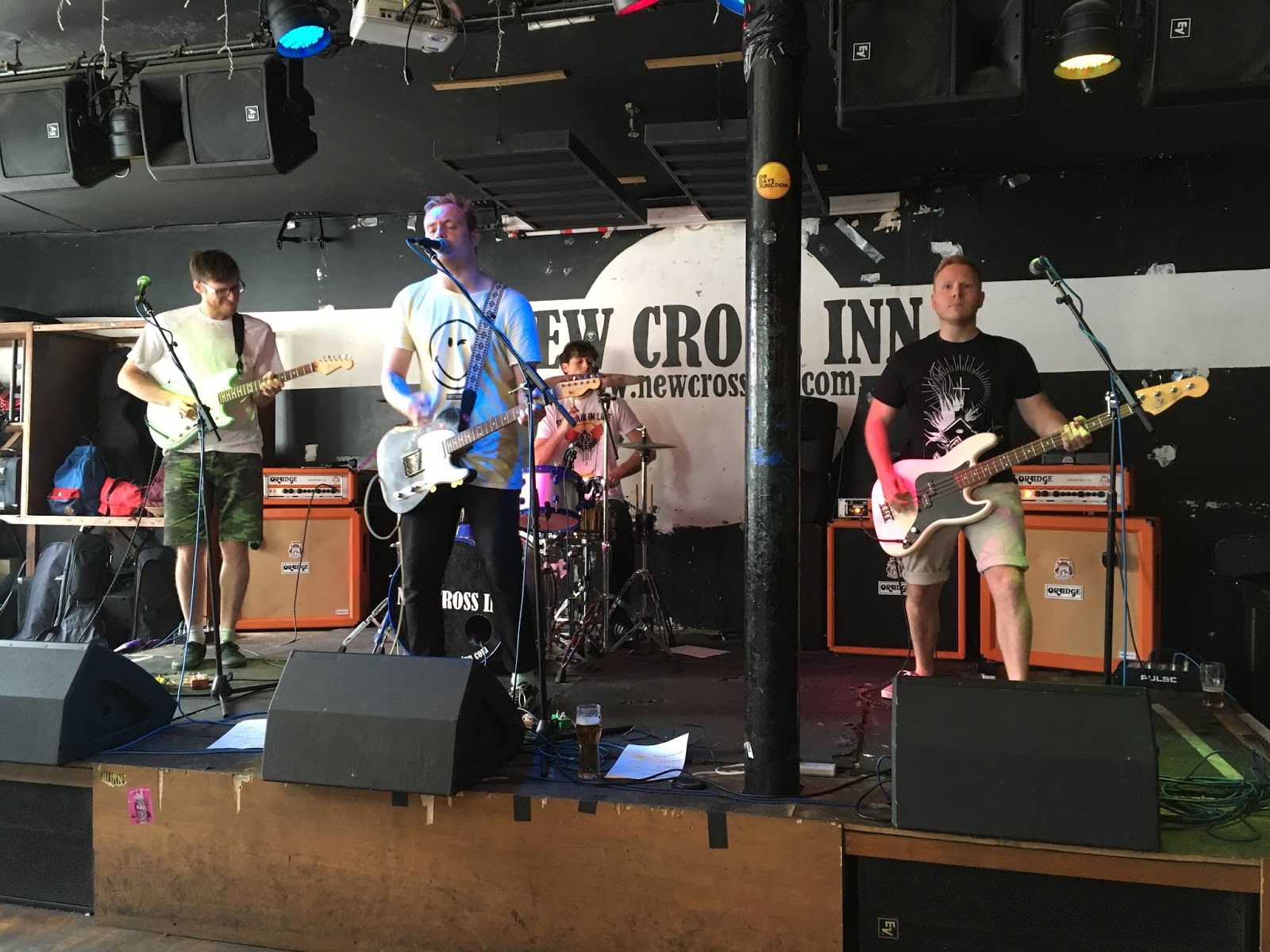 SKIV are a band I've been looking forward to checking out for a while. Lead by former Dropthis frontman Jordan Harris and also featuring Cereal Box Heroes’ Conor Yates on bass guitar, SKIV seem to a band on everyone's lips at the moment. I never managed to catch Dropthis live but have caught Jordan playing acoustically a couple of time and was really taken by what a great voice he had live. When he sings with a full band backing him it seemed even better. It's captivating, there can't be many better singers than Jordan in the UK punk scene. SKIV's set was full of great melodic punk rock tunes with guitarist Liam Lynott's song "Liam's Song" and newest single Wasteman being the songs that really stood out. I was really impressed with SKIV. 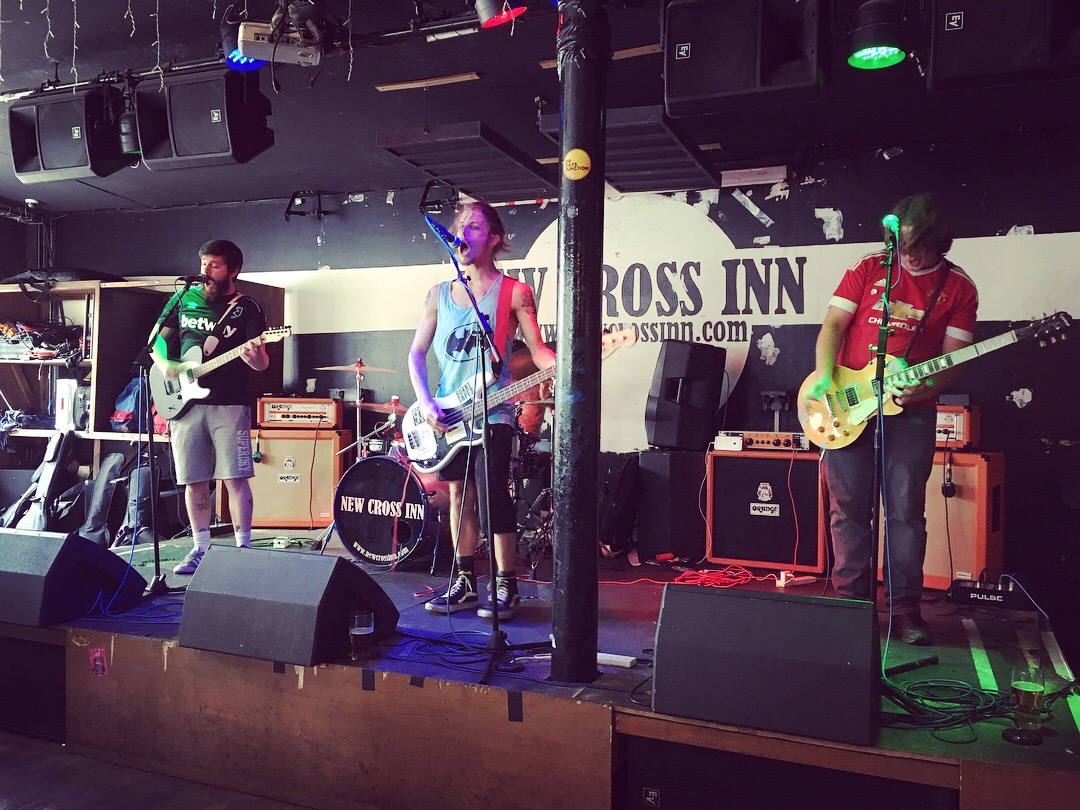 A week doesn't seem to go by without seeing Mean Caesar at the New Cross Inn. Last week we caught them at Polite Riot Festival and really enjoyed them. Not much changed in a week other than I enjoyed them even more and the songs are gradually becoming familiar. I can't wait to hear their first release when it comes out. Lead singer Danny Lester is again the star of the show, he has a brilliantly expressive style of performing that's a joy to watch. 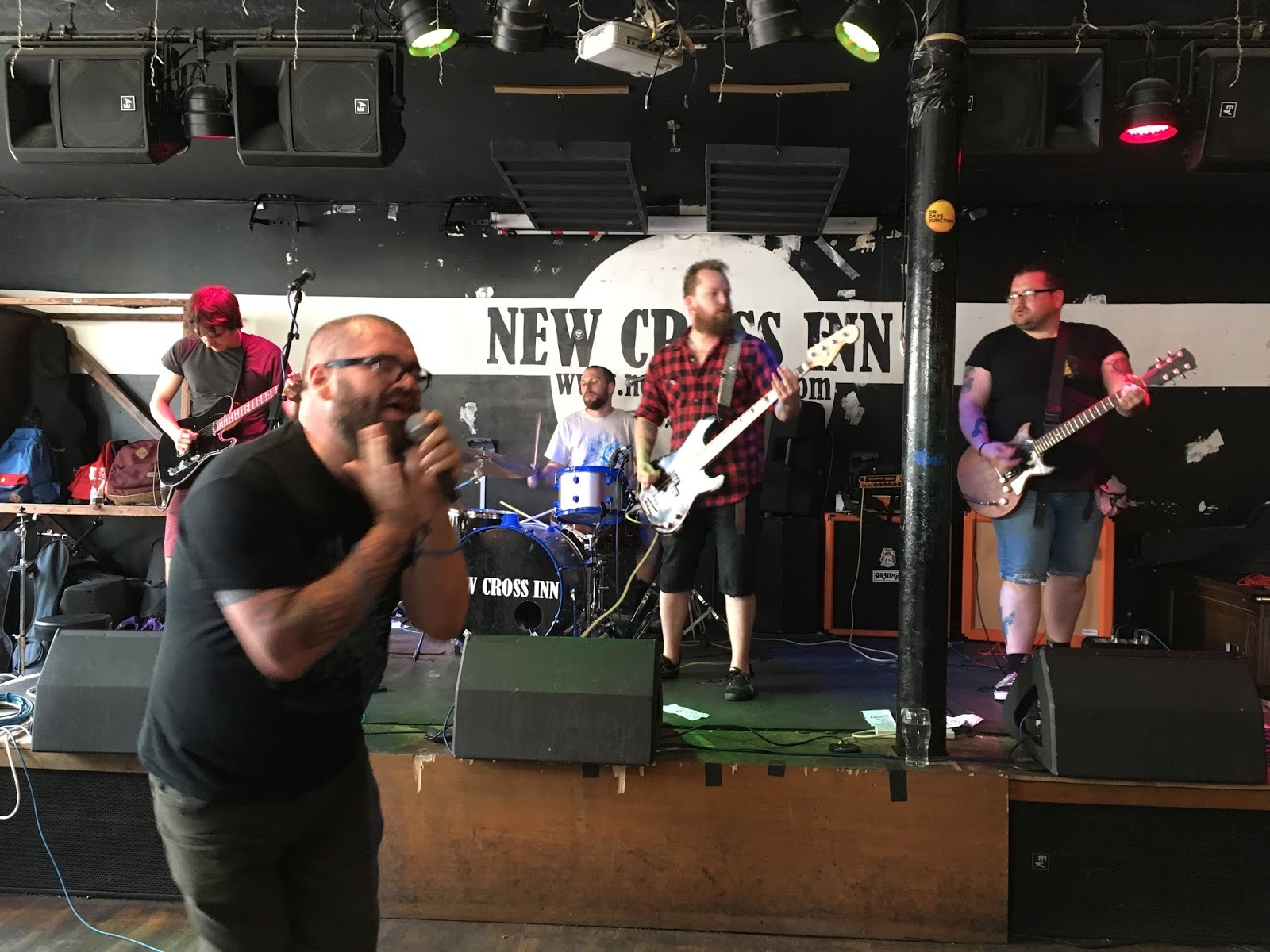 Imagine getting the opportunity to play your first show as a band supporting Red City Radio. That was the opportunity given to newcomers Fintan Stack. The five piece, who are partly comprised of former members of CPRW favourites Less Deceived and Spineless Yes Men, have release two of my favourite songs of the year so far and I was very excited to hear them live. A nice sized crowd were now gathering at the New Cross Inn and got the pleasure of seeing Fintan Stack smash their set. Something that really helps Fintan Stack stand out from many of their pop punk contemporaries are the superb vocal harmonies from Adam Harraway and Duncan Ewart. I loved them on the singles and enjoyed them even more live. Of course the two songs I knew (I'm Done and Nap All Day, Sleep All Night, Party Never) were the stand outs but the whole set was wonderful. Fintan Stack are without a doubt a new CPRW favourite. We can't wait to see them again in September supporting The Penske File at the New Cross Inn. 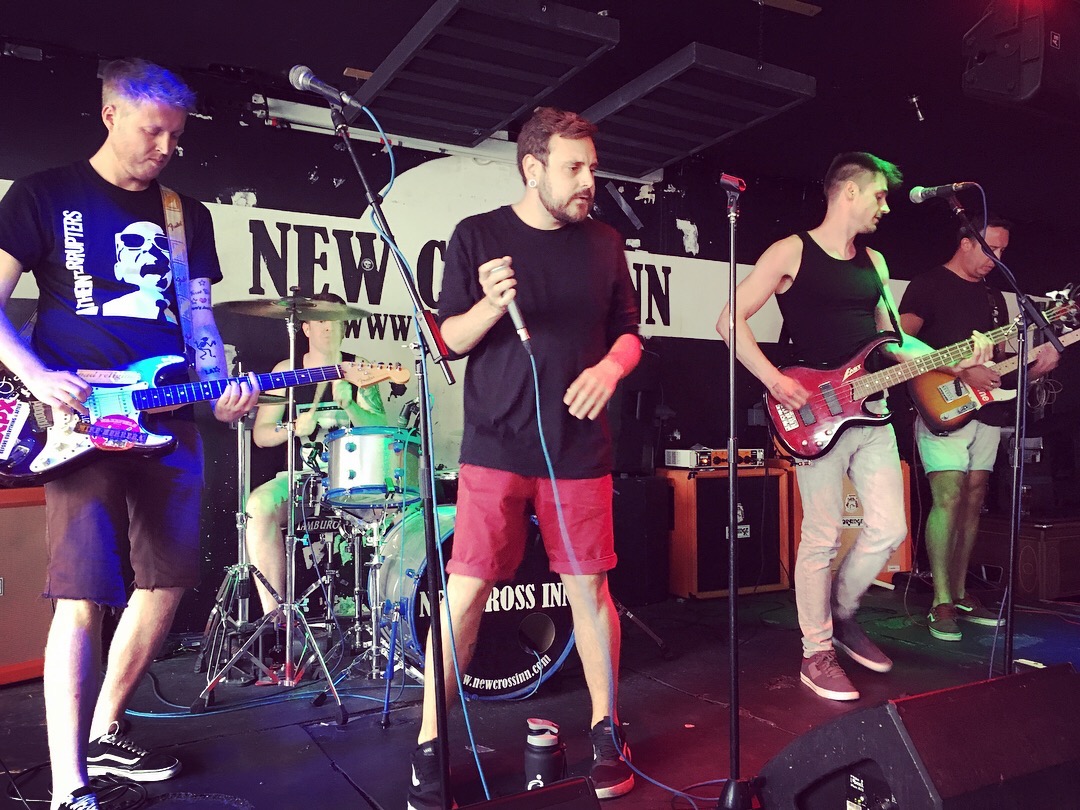 I think it's pretty safe to say that there weren't many people in the rapidly filling up New Cross Inn who knew much about the next band The Capital. It's probably even safer to say that the five piece from Preston gained a lot of new fans after a seriously impressive performance. Like The New Heat, The Capital have just released a brand new EP – This Place Matters. The EP is five songs of superb punk rock 'n' roll. This was their first time playing a show in London but it's abundantly clear that the members of this band are seasoned pros. They played such a slick set, kind of reminding me of a less rootsy Crazy Arm. This is modern working class punk rock at it's best. This may have been The Capital's first adventure to London but I don't imagine it will be the last. 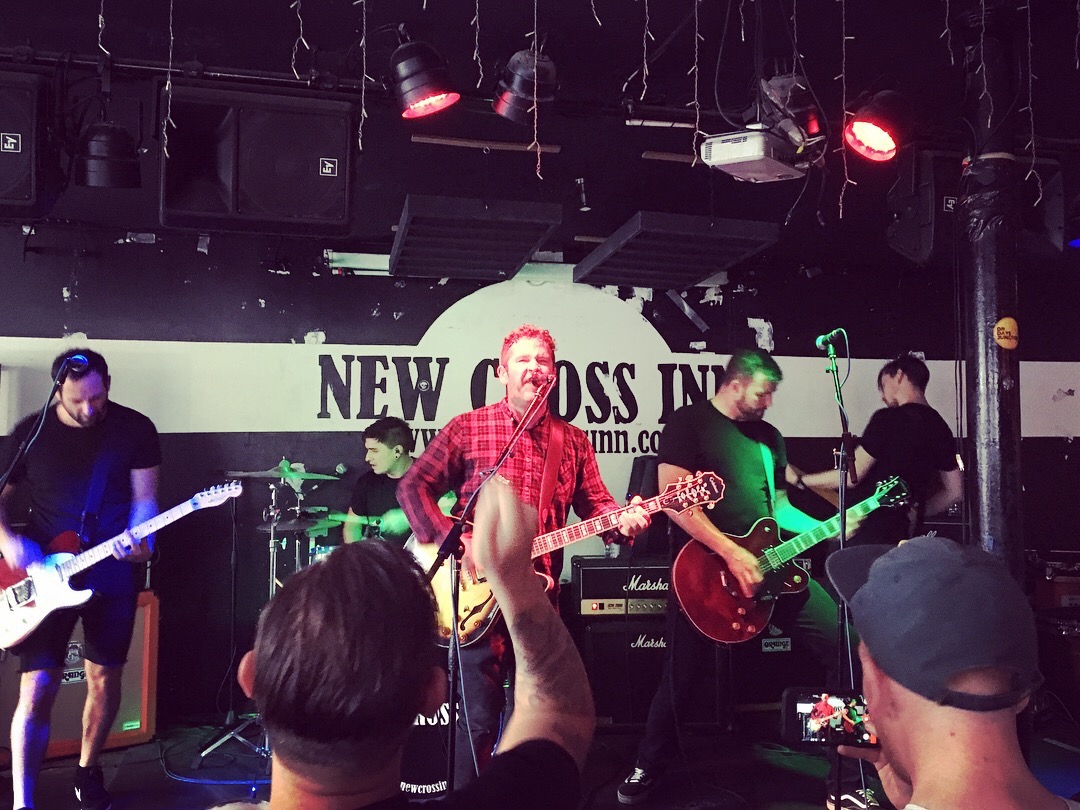 Due to Pacer and Harker having to pull out of the day, the job of main support band fell to New Cross Inn favourites Triple Sundae. This was a bit of a unique Triple Sundae set as well, Conor of SKIV and CBH was filling in on guitar for Hassan while he recovers from the elbow injury that prevented him playing with On A Hiding To Nothing the weekend before. Allowed to take the shackles off a bit, Hassan proved himself to be a very watchable frontman as he paced around the stage. Although I have to admit I did wince a couple of times as he grabbed the microphone stand in a fairly raucous way. This was my first time seeing Triple Sundae in months and I have to admit I'd forgotten just how much I enjoy watching them live. We were positioned in front of guitarist Michael (with an already agreed code to keep him updated with the Denmark vs Croatia game) and I was taken aback by the energy and enthusiasm he displayed during the set. This was my first time seeing Triple Sundae since the release of their latest EP, Peace Of Mind. Hearing those songs live was a real treat as well as plenty of old favourites. If you've not climbed aboard the Triple Sundae hype train yet then you should soon. These guys are fantastic. 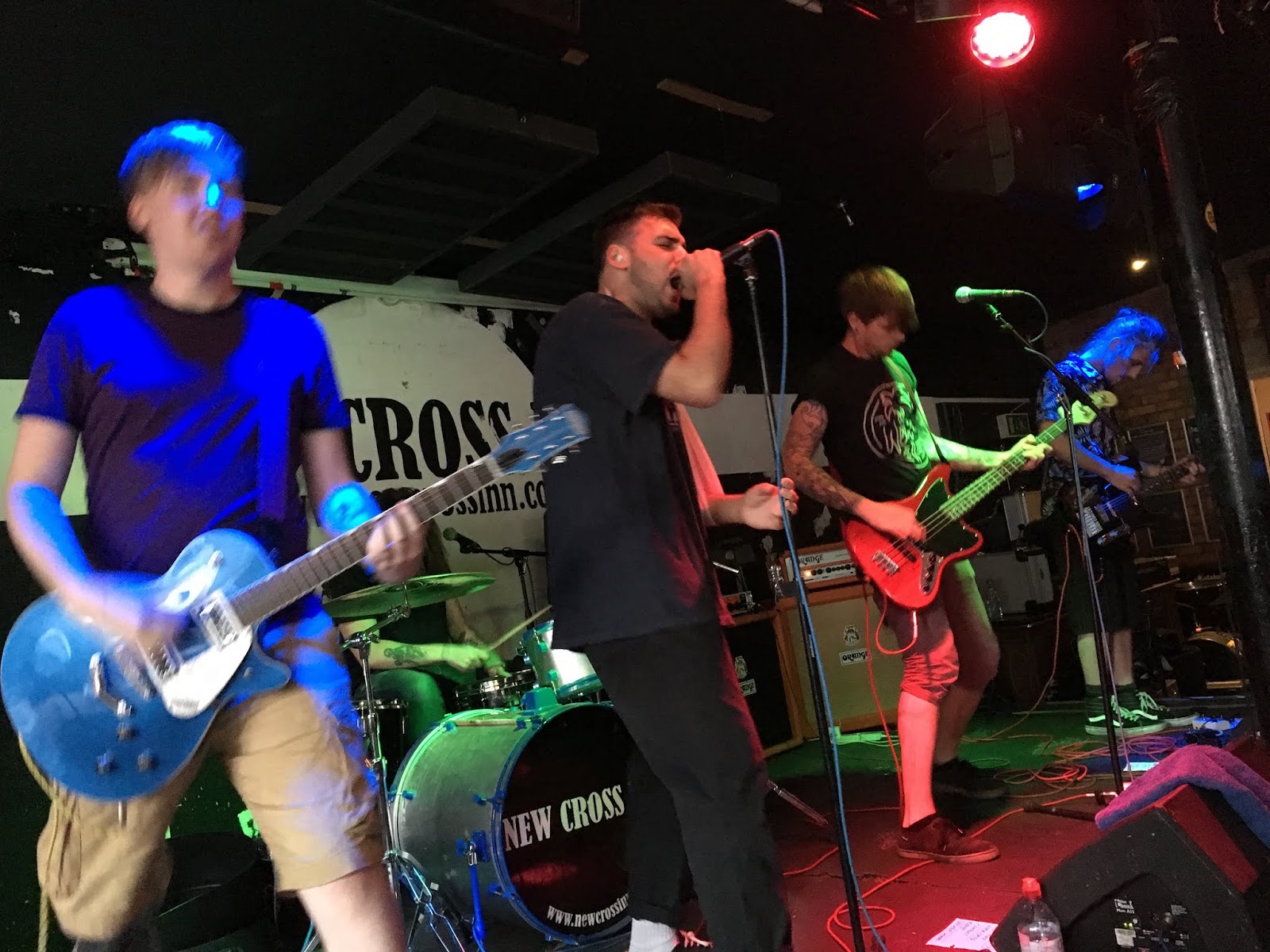 Finally, with the New Cross Inn now at full capacity, it was time for Red City Radio. Now I must admit something, for the first half of their set I wasn't paying 100% attention as I was quite distracted by the penalty shoot out at the end of the Denmark vs Croatia. It was jolly exciting. It didn't stop me having a good sing along to songs such as Two For Flinching, Two Out Of Three Ain't Rad and Two Nights Shy Of An Octave (turns out a lot of my favourite Red City Radio songs start with the word two) however. Thankfully it seemed to be only me and Michael Triple Sundae who were distracted by the football as the New Cross Inn had morphed into a mass of sweaty bodies singing along at the top of their voices to every song. Lead singer Garrett Dale is amazing. Acting almost like a preacher addressing the congregation between songs, he immediately has the room in the palm of his hands. The church of Red City Radio is the kind of church I would want to regularly attend. I've always found Red City Radio's gruff punk and to be extremely powerful and positive. No more so than when they play the song Show Me On The Doll Where The Music Touched You. The line "I am a fucking juggernaut" seemed to make 350 people throw their fists high in the air in unison as if the Oklahomans had really made people feel this way. The set was comprised of mostly old favourites mixed in with a few songs from the bands most recent release SkyTigers. These new songs went into the set seamlessly and plenty of people in the room were clearly big fans of the release. My particular favourite new song Rebels was saved for the encore and it went down a storm. Red City Radio are a part of a new breed of punk bands for this generation that we will be talking about in twenty years. They write such great songs that really come to life in a live venue, particularly a small pub in South London where you get to sing along with so many of your friends. 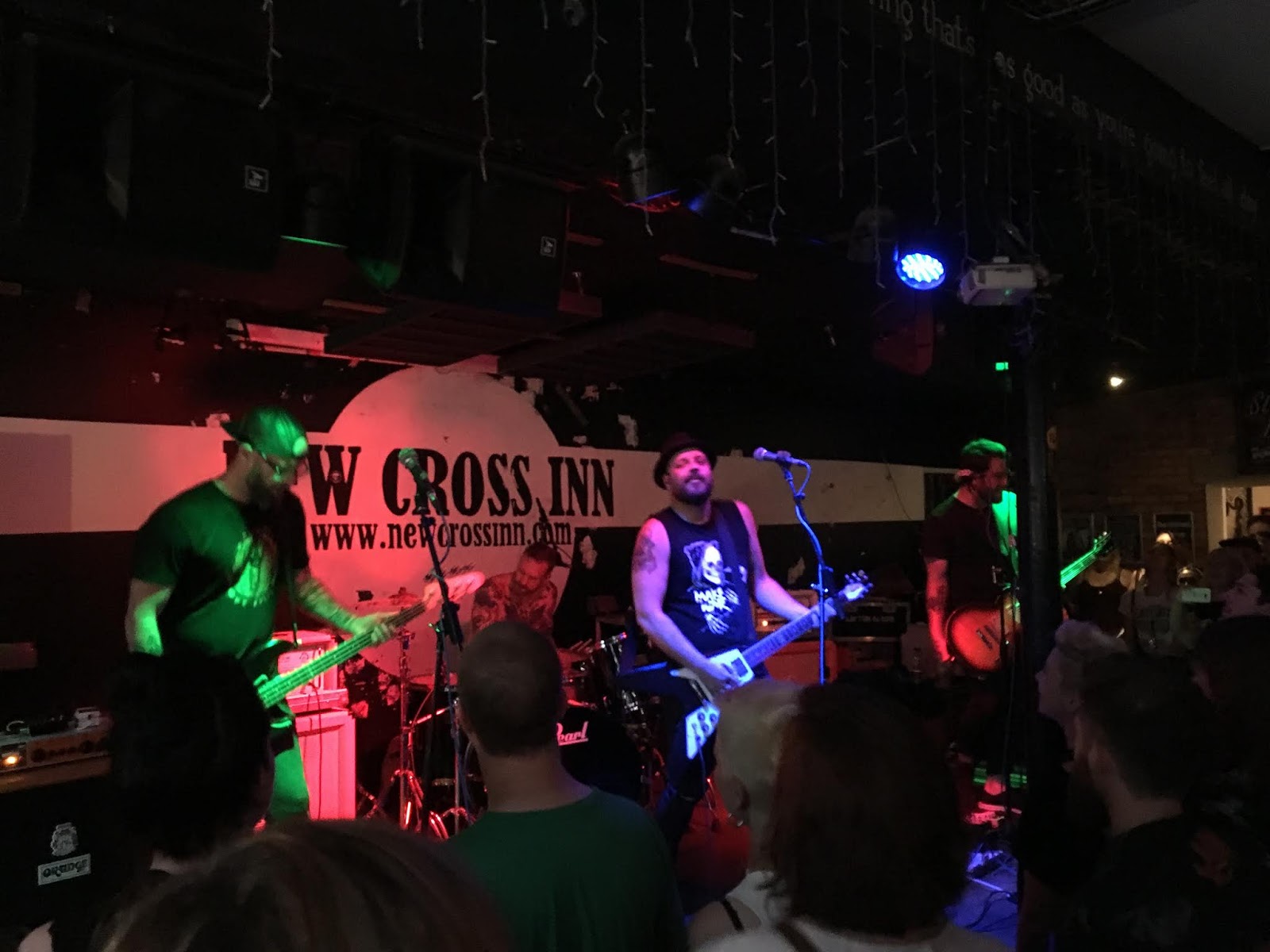 This review was written by Colin Clark. Photos by Emma Prew.
Posted by ColinsPRW at 18:19:00