Album Review: The White Album EP by The All Brights (by Emma Prew)

I knew close to nothing about The All Brights when their music video for Last Blue Text started playing on YouTube after another had finished a few weeks ago. I didn’t switch it off and the next day I checked out their latest release, The White Album EP – the fact it is on Red Scare was persuasive enough. I’ve had it on fairly regular rotation ever since but all I really knew about the band is that they are based in California, certainly don’t take themselves too seriously and they like surfing (and/or other beach-based sports).

Just before starting this review, I took to the Google to try and find out a little more about this band. I’m glad I did as it has saved me from looking like a complete nincompoop and saying ‘The vocalist sounds a lot like Dave Hause of The Love Ones.’ – because it turns out it is Dave Hause. Also featuring members of Good Riddance and Murderland, The All Brights could be considered somewhat of a supergroup. Anyway, enough of the backstory, on with the review… 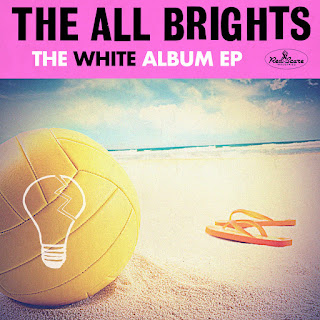 First up is Maximum Hangtime, a short, fast and immensely fun pop punk tune about making the most of the sunshine – let’s face it, there’s a lot of that if you live in California (or the UK at the moment – as I write this, it hasn’t rained in about 6 weeks) – and just having the best time hanging out with your pals, preferably at the beach. It’s a simple concept for a song but damn it’s a good’un. A must have track for all of your summer playlists. The aforementioned Last Blue Text is next and it takes a slightly slower pace than the first song, as The All Brights talk us through a modern social media scenario. So, you’re into this girl that you’ve been following on Instagram and have started exchanging messages – iMessages, that is – when all of a sudden she ditches Apple and gets an Android phone. No more blue texts. Like I said, The All Brights are not a band to be taken too seriously! Sort of like Masked Intruder but with Hawaiian shirts instead of masks.

Completely taking me by surprise on my first listen, the third track on The White Album EP is a super skankable reggae number called Midwest Fuck Me. It shouldn’t work so well after the previous more pop punk style songs but it really does. As well as getting me nodding and swaying along in my seat, Midwest Fuck Me also features one of my favourite choruses of the EP – ‘How the fuck did I end up in Ohio? I should have gone to college in Hawaii-o, I should have stayed in California where everything’s irie, Now I’m one thousand miles from the sea.’ Exchanging the reggae vibes for the more familiar pop punk again, The Ballad Of Me And My Funds (great title) is next up. Not content with singing songs about social media and surfing, this tune is about people who use their excessive funds to buy their way into social groups – and the people that encourage it. If you’ve got plenty of money then you’ll definitely be happy, right? There is a bit more of an edge to this track with the instruments seemingly being played harder – plus there’s a sweet guitar solo two thirds of the way through.

I’ll waste no time beating around the bush, Stand Up Pat L. Board is my favourite song on this EP. I don’t know all that much about surfing or paddleboarding but I gather that some surfers look down on paddleboarding as a lesser watersport. This track, however, sticks up for paddleboarders worldwide in such a feel-good fashion that I feel uplifted myself despite having never tried either sport. The song is just so darn catchy! Stand Up Pat L. Board is also the song that I think makes the best use of all three vocalists. So good! Then, bringing the EP to a close, comes the ukulele-lead I’m Buying A Boat. It’s another change in tone and pace that I wasn’t expecting but it turns out it was just what The White Album EP was missing. I’m Buying A Boat is a break-up song of sorts in which the guy at the centre of the story decides the best method to get over the girl is to ‘buy a boat and sail out to sea’. No break-up story would be complete with just one side of the story however and after a steel drum and ukulele interlude we get to hear the lady’s point of view – spoiler alert: she’s not fussed and has been cheating on the guy with his best friend. So much drama and a fine end to this surprisingly awesome, comical little EP.

Check out The All Brights on Facebook here and you can stream and/or download The White Album EP on Bandcamp here now.