O’Holy Ghost are a relatively new London-based four-piece that we have been aware of for a little while at CPRW HQ. Colin and I saw them play The Burnt Tapes’ EP release show (for Alterations) last summer which I believe was one of their first gigs together as a band – if not their actual first, I can’t quite remember. I do however remember that I really enjoyed watching them play and so when Colin mentioned to the team that he’d been sent their debut EP I was keen to take a listen. Featuring five brand new songs as well one that was previously released (on Spotify, at least), TRVTH is out on the 13th of July. Here’s what I thought of my early listen… 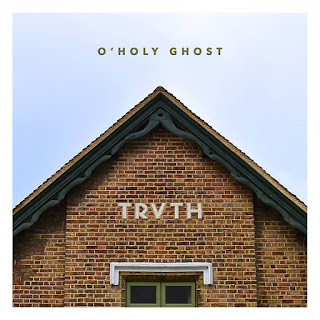 Kicking the EP off is a song called Across The Pond and, as this is the first ‘single’ from TRVTH, you can actually already listen to this one online – which you should, because it’s great. I was a little surprised when I first hit play on this track as I’m fairly certain that alongside the opening guitar melody there is some harmonica, adding a touch of folk to their straight-up punk rock sound that I recalled previously. If so, then you can consider me pleasantly surprised as I love a bit of harmonica – but I could also be completely wrong and it’s a guitar or something. The song is for the most part a relatively mid tempo one but that doesn’t stop it from packing a punch. Across The Pond is an anthem for escapism with the chorus offering a big singalong opportunity supporting this theme – ‘Let’s go anywhere, With anyone, Across the pond.’ What a great start. Next up is the aptly titled Grunger. I say aptly as, in contrast to the first song, this is quite a grunge-sounding number to begin with. Featuring a heavy bassline and some steady but firm drums, Grunger starts out with quite a slow pace. The opening vocal lines, which sound very polished and clean compared to the instruments, are distinct – ‘I’ve been trying to figure out, Why I’ve not been sleeping…’ As the song progresses, the instruments seem to get louder, faster and more intent – I was definitely doing a bit of headbanging whilst listening. Lyrically, O’Holy Ghost focus on repeating several lines such as those mentioned earlier and ‘You kept me up all night.’ There’s a great distinction between two vocalist in Grunger, particularly at the end when each voice is singing different parts, which works really well.

I Am A Jinx is the song I was referring to in my intro as having been previously released – and therefore I had already listened to it prior to hearing the full EP. Thankfully I love the song so am more than happy to see it included on TRVTH. Picking the pace up, I Am A Jinx has a lovely instrumental introduction that is a bit reminiscent of Iron Chic which is never a bad thing. The vocals, however, are not so Lubrano but they are delivered with such a great intensity and bring a feeling of urgency to the song. I Am A Jinx is about feeling like you’re always making a mess of things and bringing bad luck into certain situations. The highlight of the song absolutely has to be the bridge which starts out very softly as the two vocalists sing alternate lines of ‘Don’t you know the songs we sing, Don’t mean a thing to anyone / Chords and melodies forgotten, I was hoping you would sing along. (x2)’  before the intensity is once again cranked up for a superb singalong moment – ‘Well don’t say that it’s over, When the pen has run dry and you scream, Just one more verse.’ As if fuelled by the previous song’s fire, the fourth track, Tio, doesn’t waste any time in kicking off. The opening line of ‘Hey Tio, Good to see you’re doing well.’ is more yelled than sung but it’s passionate rather than simply being raw-sounding. Tio, slightly oddly, reminds me of Great Cynics and their song Want You Around – Chunky. Musically, the two songs are not all that similar but both tracks seems to be written about dear friends. This song is basically O’Holy Ghost’s way of telling Tio that ‘It’s good to know you, It’s nice to be known, And if you’re drinking, You won’t be drinking alone.’ Who doesn’t appreciate an honest song about friendship?

Saudade is the title of the penultimate track and, I must admit, I had to look up the word to even know what it meant. ‘Saudade’ is a word of Portuguese origin that means a feeling of longing, melancholy or nostalgia. Personally I love a bit of that in my punk rock. The song opens with a big catchy guitar riff and it isn’t long before those true punk rock singalong-inducing verses and choruses come into play. Despite the title of this song, it actually feels like the opposite of melancholy and more like an angry and defiant gesture against those that might want to drag you down. I dare you to listen to the chorus and not want to sing along – ‘We’ll do this forever, We keep telling ourselves that we’re doing just fine, We’ll do this forever, To the end of our days, And I swear I’ll see you in hell.’  Unfortunately that brings us to the last song of TRVTH, Divorce. Anger and frustration vented in the last song, Divorce begins with some pleasantly jangly guitars and some soft ahh-ahh-ahhs that feel more indie or dream pop than punk rock, at least until the slightly more rough-around-the-edges vocals come in. It’s a combination that not only really works but sounds fresh compared to the rest of the EP – in fact, the whole EP has a very nice variety in sounds. Of course, with a title like ‘divorce’ this is going to be a somewhat bitter track but it also offers up the idea that you can be forgiven for your mistakes and that you are not necessarily a bad person because of things you’ve done. ‘You’re not the first, You’re not the last, My friend you are forgiven.’

O’Holy Ghost are playing a free entry release show for the EP on Thursday 26th July at The Cavendish Arms, London, with Sam Russo, Mean Caesar and Modern Shakes. Check the Facebook event for all the details.

Like O’Holy Ghost on Facebook for updates on where you can find TRVTH when it is released on 13th July!