After getting home at 2am from the second night of Polite Riot (thanks Thameslink for your rubbish new timetable), Emma and I found ourselves back on the train heading to the New Cross Inn at 11am. The music didn't start until after 3pm but they were showing the football and there was no way I was going to miss England's 6-1 demolition of Panama. There were a few people already gathered when we arrived at the pub for the match including some of the bands playing today. When we arrived the first thing that caught our eye was the day's headline act A Wilhelm Scream's impressive merch set up. Something we're not used to seeing at the New Cross Inn. The match finished, England won and the pub was quickly transformed from pub to punk venue just by taking the benches outside. 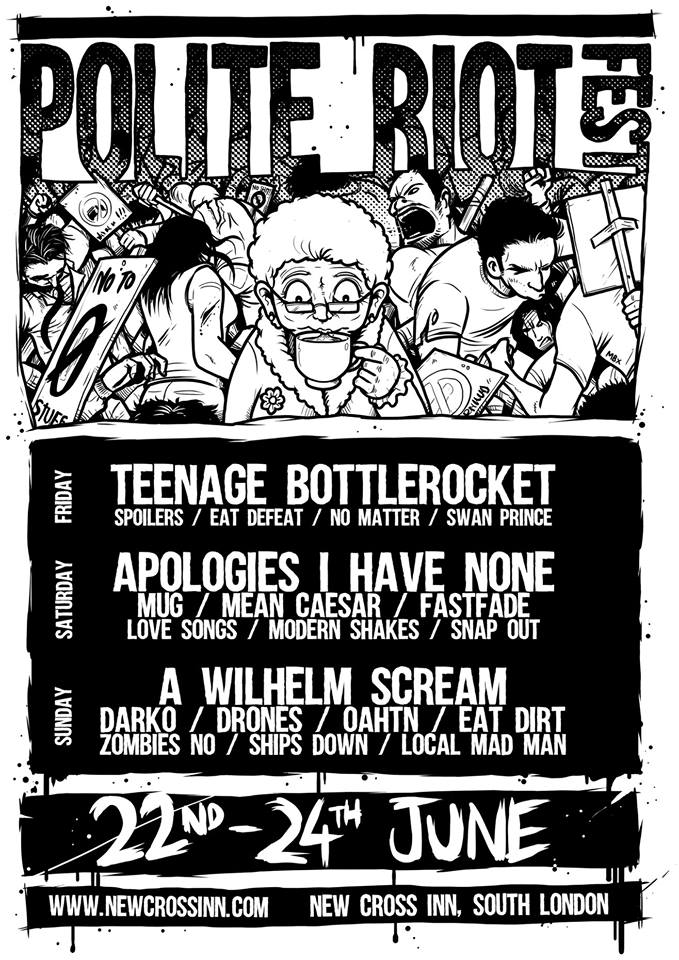 Today's bands fell more on the melodic hardcore side of punk rock. The opening band were definitely much more on the hardcore side. Local Mad Man are a four piece band from South East London who I guess were put on to help shake out the cobwebs for us tired souls who had already done two days of festing. Verging on heavy metal, Local Mad Man played a ferocious set that certainly did wake us all up. What a big way to start the day. 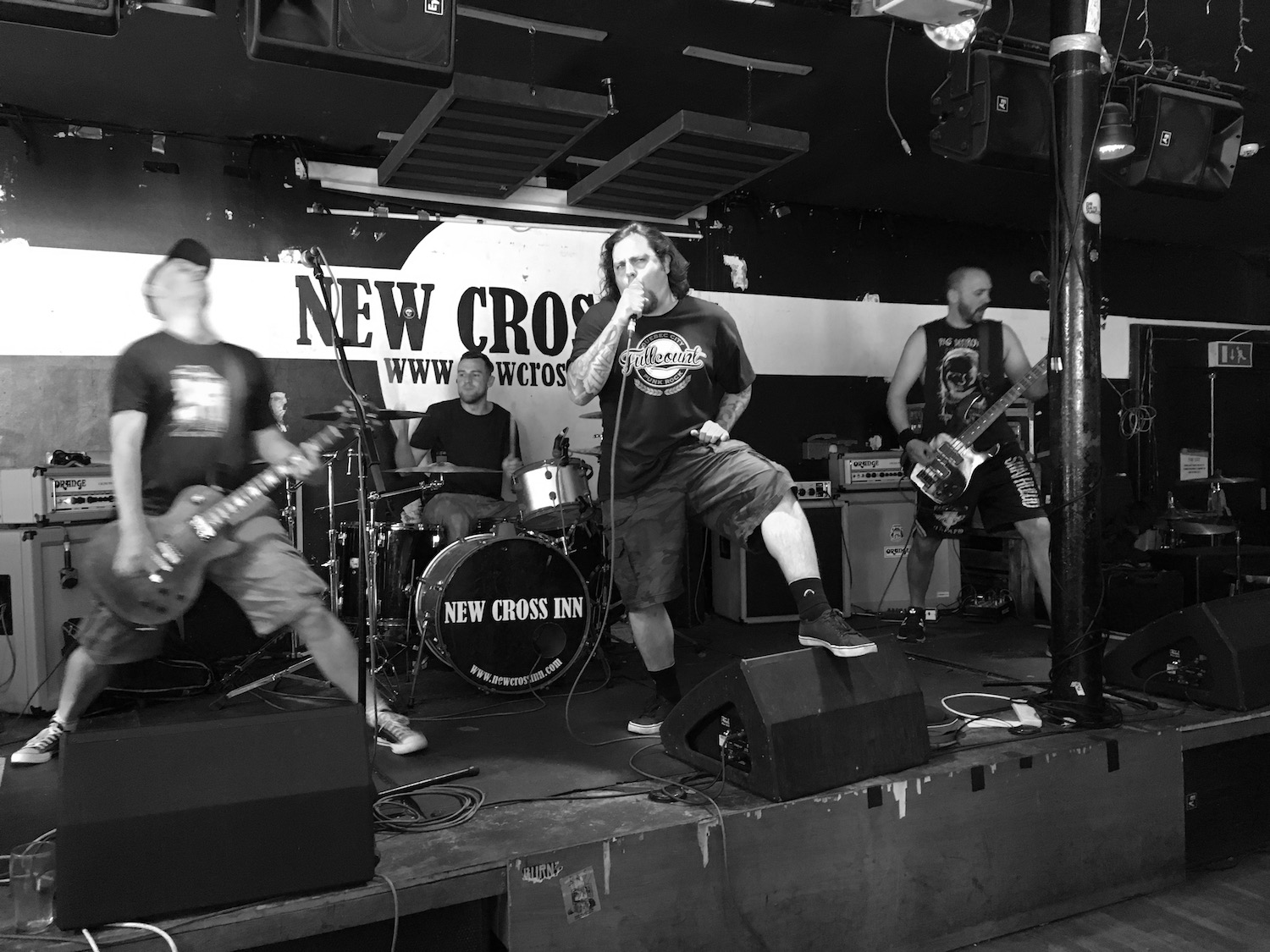 Up next was perhaps one of the most anticipated sets of the entire weekend. It was definitely mine. Ships Down were playing their final ever show and they were on the same bill as their heroes, A Wilhelm Scream. I first became aware of Ships Down when guitarist Jack sent me a copy of their demo for review. Since then we've become good pals and very often meet up at gigs. He's a wonderful man. Sadly I had never had the chance to see Ships Down perform live and didn't think I'd get the chance until they were announced for this show. My gosh they were incredible. I honestly can't remember the last time I came away from a set and was just speechless. Speaking to people after the set I couldn't actually use words to describe it, I just mimicked my mind exploding. I may have mentioned that they were incredible. The five piece played a unique brand of theatrical melodic punk rock that was as captivating as it was exciting. The whole band was just amazing. Front person Joseph had the crowd in the palm of his hand for the entire set singing beautifully as well as being very engaging between songs. Backed by four superb musicians I stood there in utter amazement wishing I was as good at anything as these guys were at their instruments. It's a huge shame that Ships Down have decided to call it a day as there are so many more minds they haven't blown yet. RIP Ships Down. 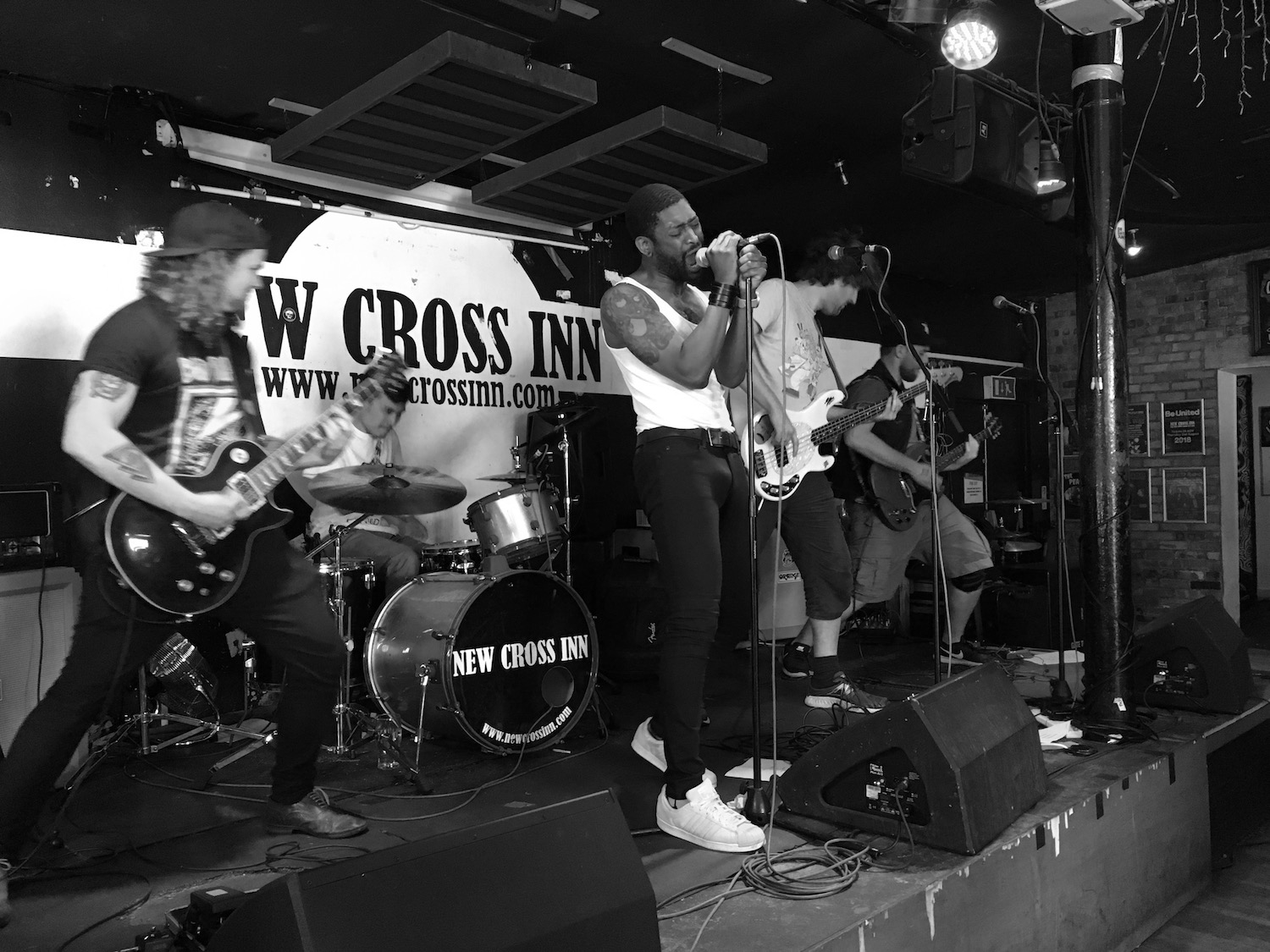 In a slight change to the days schedule, Umlaut Records finest hardcore band, Eat Dirt, took to the stage. This was because Zombies No had been delayed getting to England, from France, due to their ferry being delayed. Eat Dirt had a special guest member for their set with Rob Piper of Darko filling in on guitar for the five piece. Eat Dirt have become one of the most talked about bands in the London punk scene this year, becoming well known for their infectious hardcore punk rock as well as a raucous live show. This is the type of hardcore that I love. It was fast and energetic. There was a ferociousness about it but it was also quite light-hearted and a lot of fun. I can see why Eat Dirt have been making such a name for themselves this year. I'm sure there is even more to come from these guys. 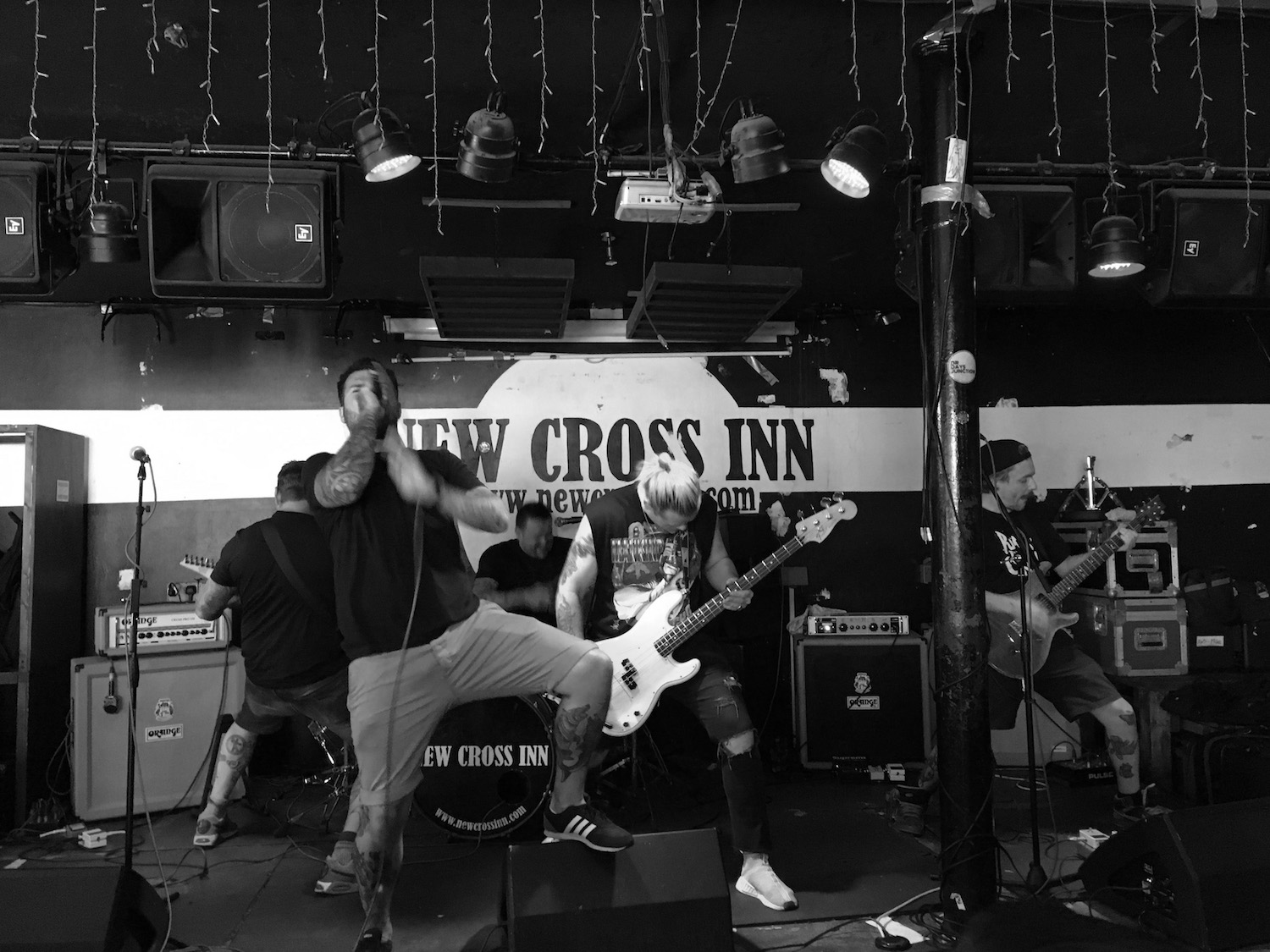 After a bit of an extended lunch break for everyone it was time for Zombies No who basically arrived at the New Cross Inn and immediately took to the stage for sound checking. Umlaut Records put out Zombies No's latest album, Divided We Fall, earlier this year to some very favourable reviews. Playing some intense melodic punk in a similar vein to Propagandhi, Zombies No clearly put all they had into their set and seemed to be using it as a way to release all of the stress that they'd had from their journey to London. I think perhaps the crowd were a little spent from the previous sets from Ships Down and Eat Dirt to fully get immersed into the Zombies No experience but it was still a good time regardless. I'm definitely keen to catch them again. 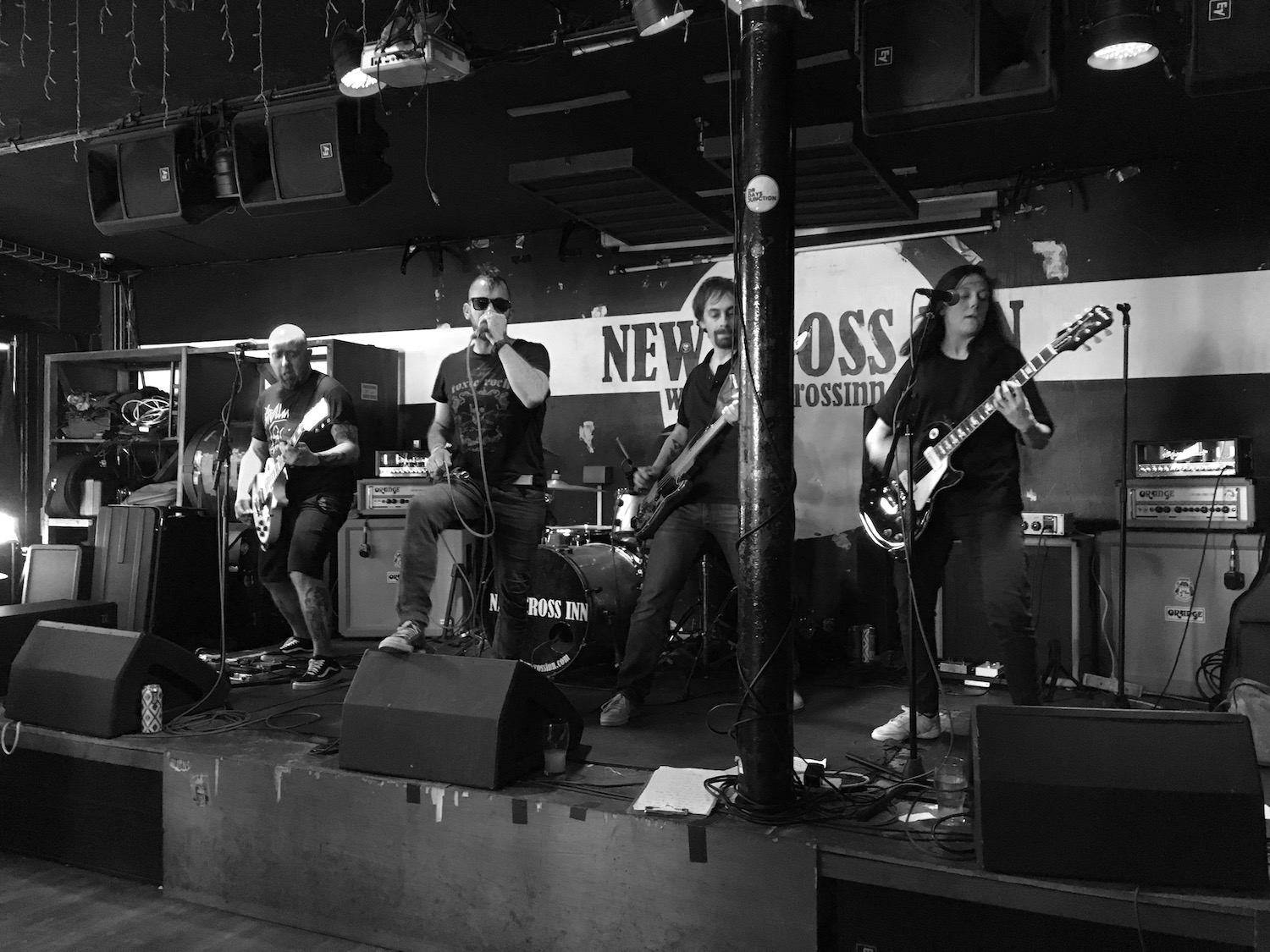 Disaster struck for the next band On A Hiding To Nothing when guitarist Hassan fractured his elbow the night before. Luckily for OAHTN the band's former guitarist Richie Cooper now drums in Eat Dirt so was able to step in at short notice. This could have been a very shaky set for the band but honestly if you hadn't of known that Richie was standing in then you wouldn't have suspected that anything was up. The man smashed it. If you've not seen OAHTN yet then they play ridiculously fast skate punk music. Lead singer Al has one of the most unique and recognisable voices in the UK scene and it was on top form here. For the first time at an OAHTN show, I find myself (trying to) sing along with the band. They play so fast it's so hard to keep up. Like Müg on the previous day, OAHTN are another really underrated band who should be much more well known than they actually are. Such a fun band to watch live and cracking songs. 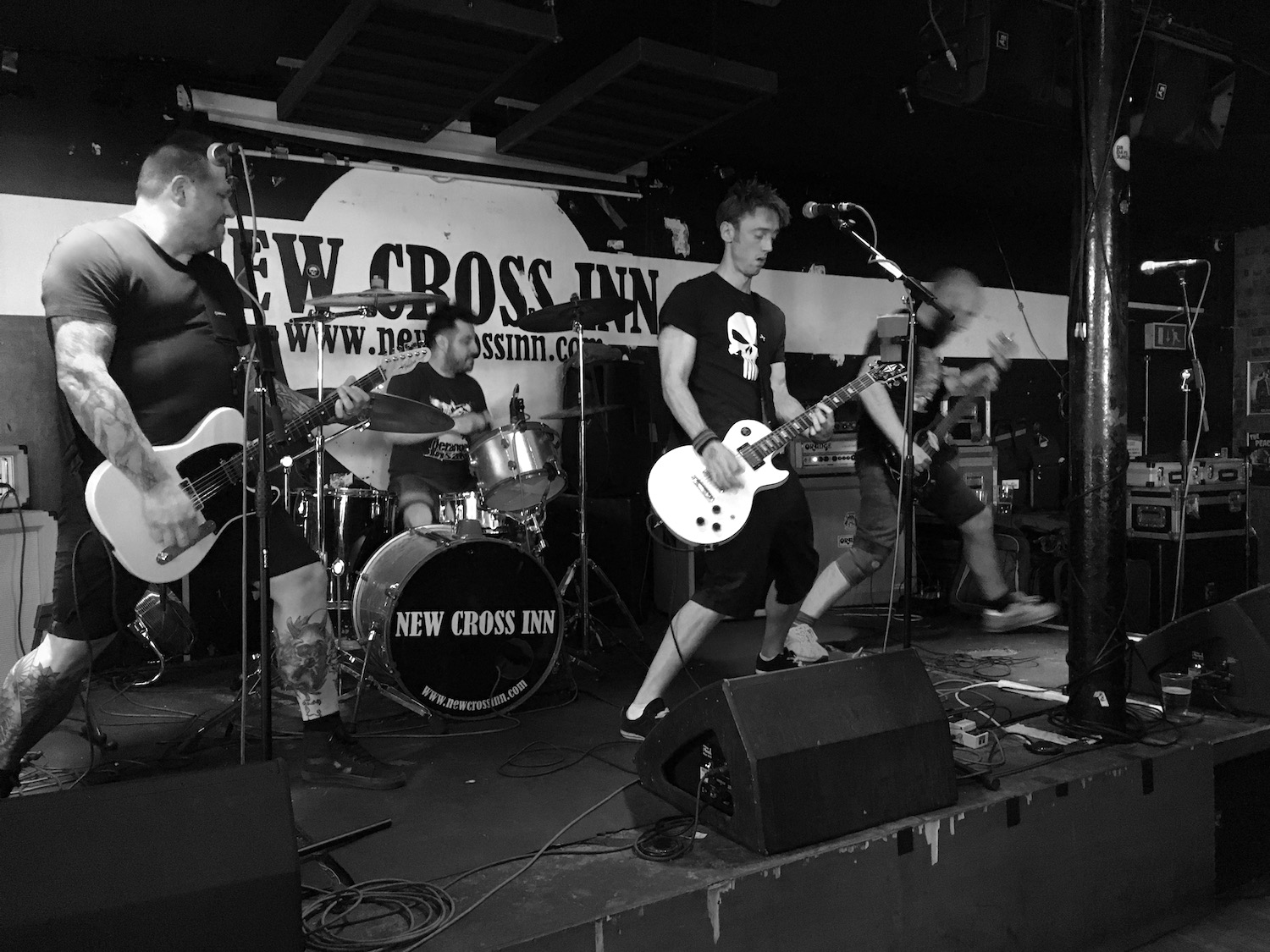 Drones are one of those bands that I've known about for what seems like forever but have never seen live and, to be honest, haven't really even listened to. CPRW's Robyn had been to see them at Manchester Punk Festival however and told us very positive things about them so Emma and I were both very much looking forward to checking them out at Polite Riot. Today Drones also had Rob Piper filling in on guitar for them – it's almost like Richie and Rob were competing to see who could play the most sets throughout the day. I was really impressed with Drones and I really wish I would have known the songs so I could sing-along with front person Lois McDougall. Lois is everything you want in a front person as she commands everyone in the New Cross Inn's attention through the power and intensity of her voice. Drones music is very politically charged and also extremely empowering. It got my heart pumping, my foot stomping and my head banging. Not content with prowling around the stage, at one point during the set Lois went through the crowd, over to the bar, climbed onto that and screamed out some of the song before heading back to the stage. Drones were fantastic. 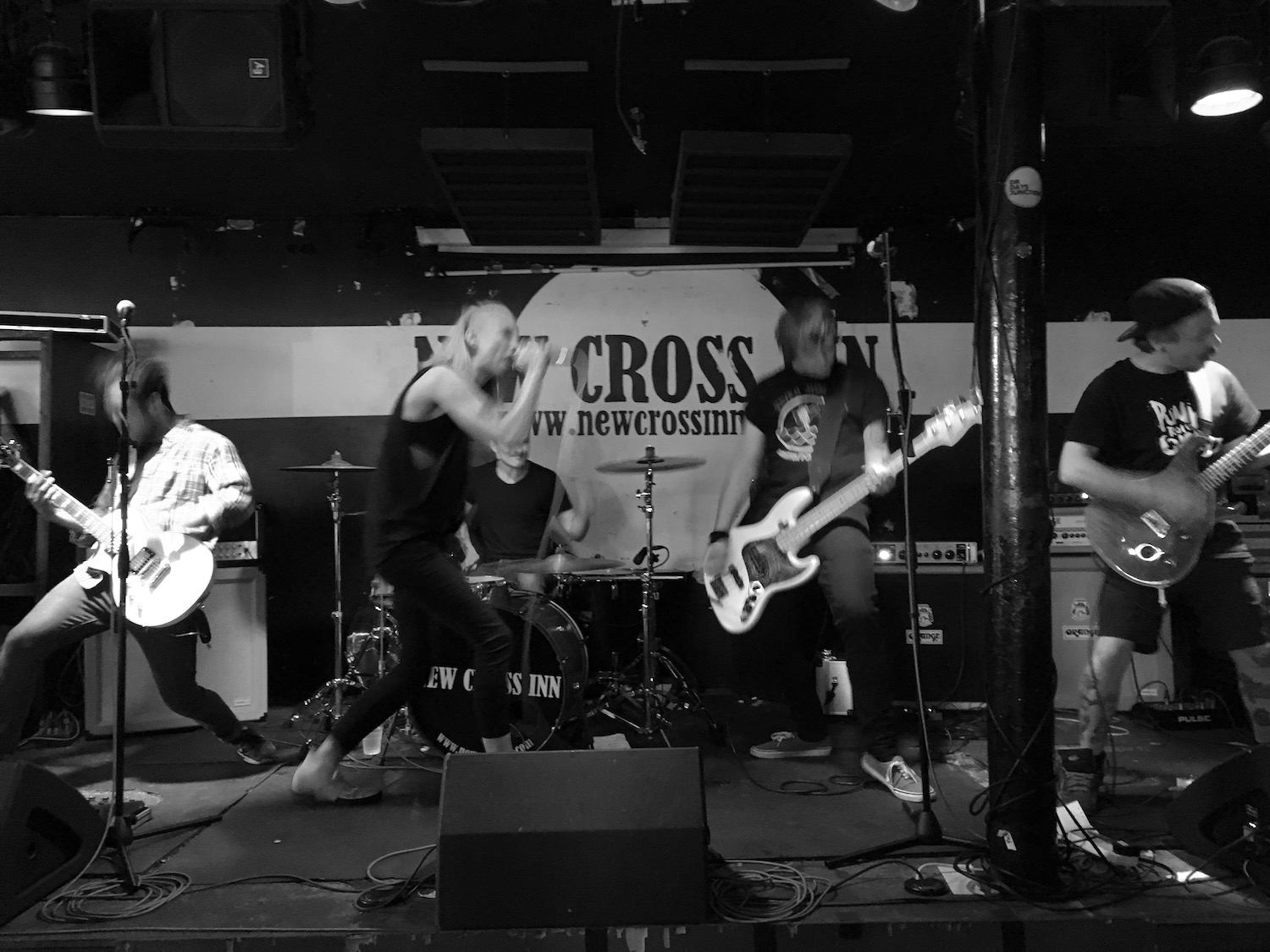 The penultimate band of the day and indeed of the whole of Polite Riot Festival were UK melodic punk legends Darko. Rob Piper was playing his third set of the day with his actual band this time! Honestly Darko could have headlined this festival and I don't think anyone would have minded. This was actually my first time seeing Darko since the first MPF back in 2014! That's ridiculous and I don't really know how I managed that. The five piece really showed me what I had been missing with a superb performance. For the first time all day the New Cross Inn felt really packed and thus it began to get very sweaty. A small most pit opened up in front of us with the crowd getting increasingly rowdy for the band. At one point we were even treated to a human pyramid. Darko put in a performance that proved why they are such a highly thought of punk band not just in the UK but all over the world. Hopefully it's not so long before I see them again. 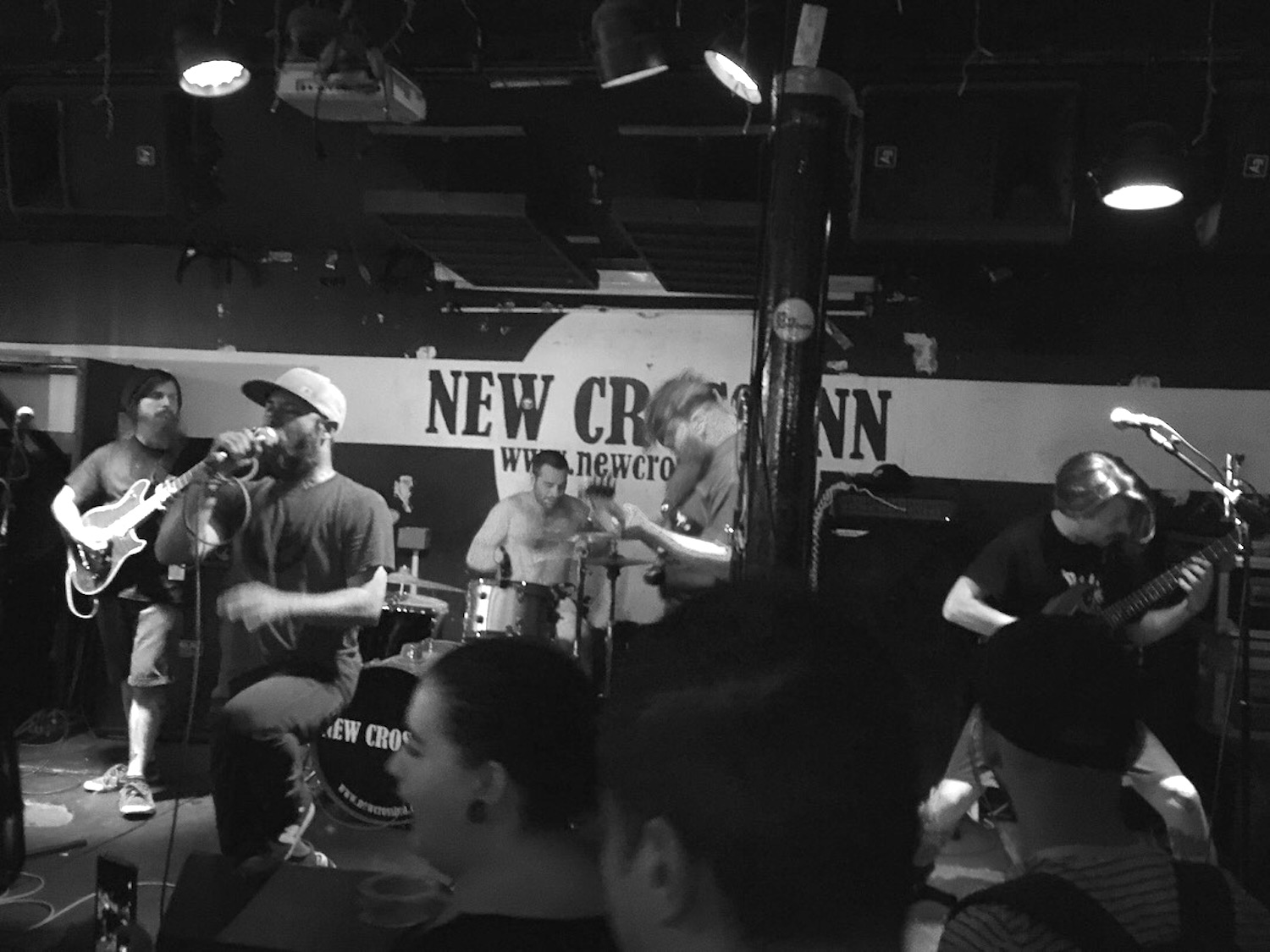 Finally it was time for the one and only A Wilhelm Scream. This was a massive deal for all involved with the New Cross Inn having a band of this stature and calibre coming down to South London to play their festival. It shows that the venue has become a more and more viable option for the best bands in the world to come and play shows. Time for me to be honest, neither myself or Emma are massive fans of A Wilhelm Scream and we don't really know any of their songs. For this reason and because the New Cross was now like a sauna we decided to hang out at the back of the crowd and watch the chaos unfold before us. I even took the opportunity to take my trainers off for a little while – my feet were so sore! For those who are big AWS fans, which was pretty much everyone else in the room, I'm sure the set was an absolute dream. There looked to be plenty of dancing, moshing, fists in the air and huge sing-alongs as AWS stormed through their set. The absolute highlight for me, and I'm sure all who had seen Ships Down earlier in the day, was when Joseph of the aforementioned ban took to the stage again to sing The Horse. Ships Down are hugely influenced by AWS and normally would cover The Horse during their own set. Joseph killed it on the stage and it was a truly heartwarming moment seeing him be able to fulfil one of his dreams on the day of Ships Down's last ever show. What a special moment that was. We snuck out of the New Cross Inn a little while before AWS finished their set in hopes of catching an earlier train back to Bedford but I'm certain everyone else enjoyed the rest of their night thoroughly. 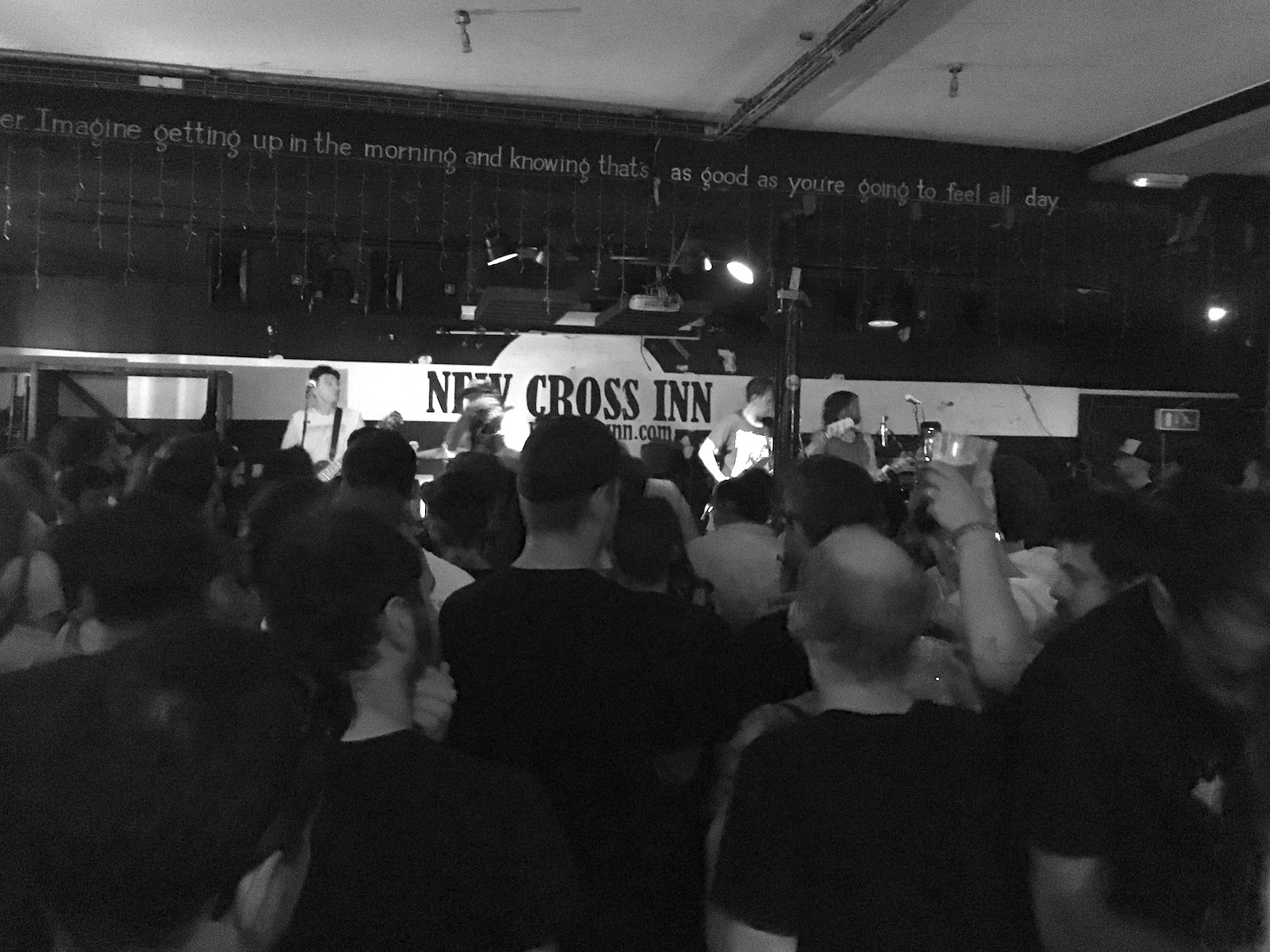 Polite Riot Festival was an absolute triumph and smashed all expectations. All the bands put on great shows and the atmosphere, as always at the New Cross Inn, was superb. It was a weekend full of great music and great friends (and an England win). What more could you want from a weekend? I hope Polite Riot Festival becomes a yearly event, in the mean time I'm excitedly awaiting the ska punk version of the weekend named Level Up at the end of July.

This review was written by Colin Clark. Photos by Emma Prew.
Posted by ColinsPRW at 10:49:00