Album Review: Thank You For Being A Friend by 88 Fingers Louie (by Richard Mair)

It's almost impossible to think of a band whose history is as tumultuous as that of 88 Fingers Louie and for them to be able to release an album a quarter of a century after first forming is even more impossible to fathom. So is the new 88FL release a nostalgia filled trip down memory lane or an essential release by one of the scenes forever underdogs? 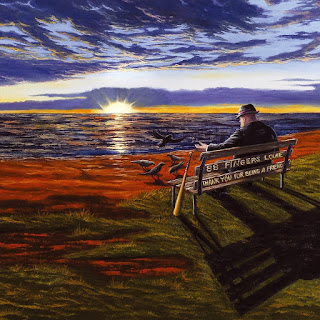 Melodic hardcore is such a difficult beast to define; you could on one hand opt for the more metal tinged approach of bands like Pennywise or straight up hardcore of Boysetsfire or even the more emo take offered by bands such as As Friends Rust. My point is it's a varied and diverse term for a varied and diverse scene, with a few notable exceptions where the term is absolutely accurate. Whenever I think of the phrase "melodic hardcore" a small number of iconic 90s bands instantly spring to mind; legends of the punk rock world such as Good Riddance or Strung Out and perhaps the most self-destructive band ever 88 Fingers Louie.

When they split for the second time in 1999 they should have been riding on the crest of a mind-blowing second album "Back On The Streets" and an equally as good split single with Kid Dynamite. With a second wave of melodic punk rock led by bands such as Alkaline Trio and The Movielife about to break out, I'd argue 88FL could have been equally as huge as the obvious band that formed out of these ashes - Rise Against. Instead to many people they probably became a nice anecdote to remind them of the quality that existed outside of these larger names at a time when they were discovering the scene, or a footnote to the most curious Rise Against fan to discover. Given their explosive nature, the possibility of any new material seemed almost impossible; even the announcement of new material was greeted with a degree of scepticism that it might never see the light of day.

Imagine my amazement then that this isn't just new material by a band I'd loved as a teenager, but also that it's such a barnstorming collection that makes you feel that they never went away in the first place! Indeed, from the first drum beat and chords of "Meds" any fears of this being a quick pay cheque or a retrospective self-indulgence are blown away. Full of sing-a-long moments, gang vocals and machine gun guitars, it's a ferocious opening that doesn't abate through to second song "Advice Column", where Dan Wleklinski's distinct guitar style starts to shine. The first major hardcore beat down appears in the song's refrain; this opening is a great double salvo that will put a smile on many a long-time fan's faces. This isn't the sound of a band with 25 years’ experience churning routine songs out, this is the sound of a band with something to say and a reignited passion to say it.

Like all good hardcore albums there is a feeling of unity and supporting each other to many of the songs on offer; and whilst typical hardcore is often delivered from a peer-to-peer perspective by youths and young adults to youths and young adults the maturity and reflective manner of many songs helps lift the band above the typical cliches one might associate with the scene. So when Denis Buckley sings "This is our time so take some sound advice; A simple life is a life worth fighting for" (Advice Column) it comes from a real place, from experience and a perspective of a life that has lived and loved. It doesn't feel as abstract or forced as it might feel with a band just setting out on their careers.

The soaring "All the Right Words" is another highlight; instantly it reminded me of the classic "Summer Photos". It's pure melodic hardcore perfection, and Denis' vocals sound as strong as ever; slightly throaty slightly nasally they remain as unique and distinct as you would hope.

Almost all of the songs have something to love about them. "Turned to Grey" reminded me of early 00s Millencolin and again is an excellent song driven by Dan's guitars. Whereas the poppy feel of "Here's to that Innocence" is pure Desendents-esqe joy; and an inevitable singing and dancing song!

Other stand out tracks typify the band's approach to straight up hardcore; the introduction to "Catastrophe Awaits" is truly special, drawing on elements of Death By Stereo or even (dare I say it) Avenged Sevenfold. It's pure METAL! Likewise "Novembers Big Mistake" should no doubt instigate many a circle pit whilst the band tour the album.

Final track "My Final Story" is an apt closer, with a slightly nostalgic feel to it, a great beat down and typical hardcore style whoa-whoa gang vocals to finish, bringing the album full circle really. It's a great statement to close on - "Don't take my life away" - given it feels like 88 Fingers Louie have just returned. It gives the impression they are back for the long-haul and this can only be a good thing!

It's not all hits though - perhaps the only misstep is "Knock it Off" which is a little lacklustre, especially with what seems like a Red Hot Chili Peppers breakdown in the final third. It just seems a little odd and not quite in keeping. This aside though, what 88 Fingers Louie have done is not only put the band back together (again) but delivered a truly great addition to their brilliant back catalogue. It has all the elements you expect from classic melodic hardcore; it's unpretentious, honest, fast and at times potentially brutal - it's also one of the best 35 minutes of music you'll hear all year!

Stream and download Thank You For Being A Friend here: https://birdattackrecords.bandcamp.com/album/thank-you-for-being-a-friend

This review was written by Richard Mair.
Posted by ColinsPRW at 16:20:00