Album Review: The Knife by Goldfinger (by Dan Peters) 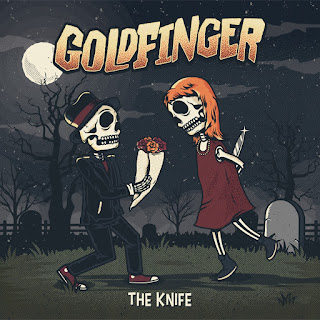 I’ve spoken a lot about bands who disappeared for a long time and have in very recent times come out with a “return to form” album in which they play songs reminiscent of their 90s heyday rather than the more experimental thing everyone started doing in the mid 2000s. Goldfinger were one incredibly special band to a lot of people and I can’t remember going to an alternative club from the age of 17 to 23 without Superman coming on at some point. Being one of the most memorable tracks on the most memorable THPS soundtracks meant that Goldfinger were on top of the world. Then 2002 rolled around and Open Your Eyes came out. A very stylized album that drew more from the IT bands at the times, like The Hives and The Vines, than from their So Cal pop/ska punk origins and it was also incredibly serious. Almost bleakly so. I don’t remember seeing Goldfinger around from that point on. I had to check the Internet to find out if they had released anything after 2002 (apparently so but I couldn’t tell you a song from either release) and they became just another 90s band I used to love, occasionally putting on Stomping Ground and Hang Ups and remembering when learning how to pop shove it down a stair set was the most important thing in my life.

Cut to last Friday and with seemingly no build up or preamble, a brand new Goldfinger album lands in my lap. Calling the band 'Goldfinger' however is a little bit of a stretch. The rest of the band in the 2010s have moved on to other things whilst John himself has been producing music and raising up a new set of pop punkers to take his place. This iteration of Goldfinger is a true pop punk super group with my personal idol Mike Herrera of MxPx taking bass duties, drumming living legend Travis Barker of Blink-182, Boxcar Racer, +44, Transplants, Yellawolf and of, course, Travis Barker – Give The Drummer Some fame is waving sticks whilst Story Of The Year's Phil Sneed is guitaring. If this wasn’t enough, there are a smorgasbord of other featured musicians on the album. In fact what this really is at its heart is a love letter to all the best bands you’ve loved over the last 20 years.

So after what is an exceptionally long preamble, we can get to the album itself. You can probably imagine just by the way I’m typing that I’m a fan of this album. I’d say don’t be silly, it’s deeper than that, but I’ll get to all that later. For now, let's check out the album:

Things kick off incredibly quickly with A Million Miles, which is suitably as fast as the name implies. Get What I Need is the first ska track and is catchy like lice in a reception class. Am I Deaf is a tongue in cheek old man rant about the “music today” which is particularly ironic since Mr Feldman is responsible for a lot of it. Tijuana Sunrise is a chill out reggae groove about drinking. Put The Knife Away may as well be an MxPx track with John singing on it. Don’t Let Me Go is another pop reggae banger. Beacon is a classic sounding Goldfinger pop punk anthem. Who’s Laughing Now is everyone's new favourite skank-a-long. Say It Out Loud is more of that good times old school pop punk that’ll have you singing at the top of your lungs. Orthodontist Girl is weird, hilarious and an all round good time. See You Around feels like a Blink-182 tune with complimentary vocals from Mark Hoppus. Lift Off is a summertime stoner nod-a-thon. Milla is a fitting send off that’s fittingly chilled to round out your experience.

So let’s get back to what this album represents. There are a pretty large demographic of guys who were/are utterly in love with 90s emo-punk (it wasn’t called pop punk until after All The Small Things had the term coined) but can’t seem to quite get behind the newer more saccharine pop punk that has dominated a music video dominated 2000s and this album is a modern dose of what we’ve craved for so long. It’s all well and good listening to the same albums for 20 years but it’s an incredible thing to be handed something brand new that triggers all of your greatest childhood memories whilst at the same time being fresh and new and invigorated. I hope this album does incredibly well because if it does it’ll hopefully allow more of this. I want guys stood in their garage right now with their 40 quid strat copies and beat up old drums to hear this and be inspired to make more because in my dreams we’re all awash with The Knife and albums as lovingly crafted and beautiful to listen to as this forevermore.

p.s. Just a quick note to Lauren Murphy of The Irish Times. Shut up mate, you’re talking out your arse and your review is basically lies, falsehoods and a deep misunderstanding about the demand for exactly what The Knife provides us. You can cram your 2 star review and get in the fucking sea with the rest of the Darwin awarders.

This review was written by Dan Peters.
Posted by ColinsPRW at 12:02:00