Dododo are a three piece emo band from Raleigh, North Carolina. On August the 11th the band released their first full length album, Allisk8r. I randomly found it whilst clicking around on Bandcamp and put it in my must review list. Here is that review. 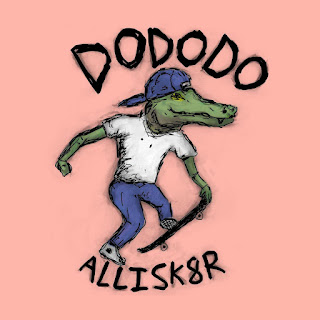 Allisk8r begins with the song SportsReference. As is always the way, this opening track really sets the scene for what Dododo are all about. Here we have a sad song played in an upbeat manor. This style works great - the sad aspect makes the song relatable to a lot of people but the upbeatness is what will bring the listeners together and help them realise that they are not alone. Next up is a song named If Those Aren't Tears Of Happiness Please Stop Crying. The song is about getting to the end of your rope and wanting to just give up. This is a state of mind that many of us have suffered from time to time so again it's a hugely relatable song. Structurally the song is fairly simple with some quieter verses sandwiching a big sing along chorus. Out3rspace starts in an interesting way with just vocals and drums starting the song off slowly. After the first few lines of the song, the guitars kick in and then the song really comes into its own. Out3rspace is one of the more uplifiting songs on Allisk8r. It's about breaking out of your shell and following your dreams. That's until the final few lines of the song - "What If I Told You Couldn't, You're A Failure, What If I Told You Couldn't You're Not Good Enough." What a way to bring someone crashing back down to earth.

I'm I'm Not Not Home Home is the name of the fourth song on Allisk8r. Something I really enjoyed about this song is the addition of a rawer vocal harmony. This gives the track an added aggression they had been missing from the previous songs. It's a short sing along track that I can see being hugely popular at a Dododo gig. This brings us to the album's title track. Allisk8r is a really sad song about struggling to be around someone and it forcing you to drink and do drugs whilst you're in their company to push away the depression. Allisk8r is a real slow burner of a song. It starts out with some nice, tender guitar before exploding with a headbanging finale. This is a song that you probably need to hear. Makeup is a slow and tender emo song. The vocals on the song have a bit of an echo to them, this gives the song an extra somewhat melancholic layer which I love. The song builds slowly and by the end I was completely mesmerised by some beautiful harmonies. The Tribe Has Spoken is the title of the seventh song. What a fantastic song this is. Switching from a tender emo song to a full frontal punk assault in the flick of a switch, the song gives Allisk8r a real kick up the butt. This punk rock finale gives the song a whole heap of emphasis and will get a room jumping, moshing, slamming and singing along like their lives depend on it.

88mph is a shorter song which for the most part feels as much like a poem as it does a song. The majority of the song is just vocals along with muffled drums in the background. This technique really grabs your attention and pulls you into the song. 88mph is about falling in love with somebody who you know is bad for you but you do it anyway. The ending of the track brings a real surprise as we get a few seconds of some intense screaming of the lines "You Talk About Passionate, You Talk About Compassionate." The penultimate song on Allisk8r is named Fall Apart. Unlike a lot of the other tracks on the album, Fall Apart wastes no time in getting started immediately. There's no slow start, just a full on rock song. This song feels much rawer production-wise than the rest of the album, with the vocals and music all seemingly at the same volume. It has a dirty sound that takes some getting used to but once you do it's another decent song. Finger Guns brings us to the end of the album. It's about questioning if you think you'll ever get better as a person. The song goes through a series of highs and lows, taking you on a bit of a ride during its four minute duration. It's a fine way to finish the album.

I think I pretty much summed up my thoughts on the album whilst talking about the opening song. This is emotional punk rock that you can relate to and sing along to. It's definitely a cathartic album that will hopefully help people find some comfort in their lives.

This review was written by Colin Clark.
Posted by ColinsPRW at 14:08:00