Last year I reviewed a small band from Oxford named Little Sparta OX1's EP Hardcore!! Bootlegs!! and absolutely loved it. It was a great mix of acoustic punk, folk and ska. Now the band have a new demos EP out. I was quite looking forward to hearing how the band have progressed. 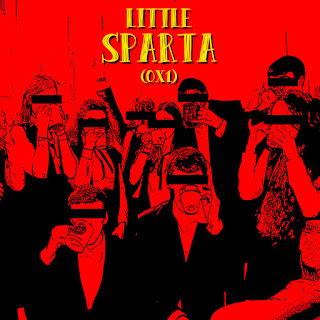 The EP begins with the track Trying To Be Serious. The first thing that you notice is that the band have become an electric band and they just have a much fuller sound now. There is an intensity about vocalist Joe's voice has he drives the song forward, while violinist Paula does a fantastic job adding more of an upbeat melody to the song. I'm hooked on the song within the first thirty seconds - I immediately want to sing and dance with the band. Up next is Last Man Standing. Last Man Standing has a rawer sound than Trying To Be Serious so isn't as instantly accessible. Once you get past the rawness, which doesn't take long, you are encountered by folk punk banger about going out with your mates drinking. The chorus is really what stands out. It's the kind of chorus where you put your arms around your neighbour and belt out the words "I'll Be The Last Man Standing At Your Fucking Wedding, First One Sleeping When We Go Drinking, When My Memory Starts To Fade, I'll Remember I'll Forget Your Name!" I loved the ending where the music gradually stops and Joe is screaming this acapella style. 0240 featured on Hardcore!! Bootlegs!! and reappears on this Demos EP. As much as I enjoyed the acoustic version of this song, the full band effort blows it out of the water. The song is about feeling alone and lashing out because you don't know how else to deal with it. The guitars, accompanied by Joe's vocals, add a lot of urgency to the song while the violin gives the song a heart. The fourth and final song is a five minute epic named Think About The Tourists. Starting out with an extended musical intro, that heavily features a pounding drum beat and the violin, the song already has a feeling of being huge about it. The extended run time takes away some of the urgency that the previous three tracks had. That urgency is replaced with a story telling element. The bridge in the song is so good. The extra, rougher vocal harmonises brilliantly with Joe and this leads to a big finale. What a great final song.

I bloody loved this EP. It shows a brilliant progression from the band's earlier work. Like I said earlier, becoming a full electric band has worked wonders and really added alot of depth to their sound. If you don't know Little Sparta OX1 then you really need to give them a chance. They are going to be huge one day.

This review was written by Colin Clark.
Posted by ColinsPRW at 14:16:00