I've always enjoyed a bit of ‘folk punk’; especially Drag the River, Wingnut Dishwashers Union, The Taxpayers and Chuck Ragan’s stuff. I first came across Rent Strike when they released ‘IX’ in 2018 and vaguely followed their comings and goings ever since. ‘Now’ is a slight departure from earlier recordings in that it is more on the ‘folk’ side of things rather than ‘punk’; but that said, it doesn’t detract from some great storytelling and personal lyrics that are very emotive. 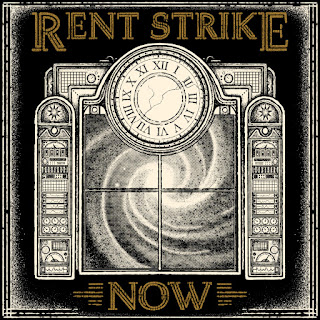 Album opener Radio Silence starts initially with typical folk guitar and folk singing, then drums, bass and the rest burst in and give the whole song a fuller, padded out vibe: later we return to the guitar/vocals. This is a great opening track about how peripheral noise (radio, TV etc.) is meaningless. Taking My Time reminds me of early Magazine, especially John Warmb’s vocal delivery – albeit in a Michigan accent. There's great, intricate guitar over pounding rhythm section. A song about revisiting the past to take what’s rightfully yours rather than putting up with what hand you’ve been dealt; “Bathed in radiation, born under a sour sign, all that I’m left with is this meaningless existence, being made to work and wait around to die.”
From The Outside is a highly emotional piece about the unfairness of existence which ends with a hopeful sense of trying to make things better; “… but I’m gonna be strong, and I’m gonna see.” Work! (Future Perfect) is a lament about having to work to live and how one person copes (beer and cigarettes) with this immutable fact – a lot of people’s favourite track on the album. There's some excellent use of slide guitar! The Solid Wall of Stuff has great lyrics about wasting life and not really knowing why; brilliantly delivered with female vocal echoes.
Next Time and Redline (Derive) are long, slow burners with thoughtful, personal lyrics that are emotionally raw and honest with magnificent and sparse guitar work that complements the words beautifully. GBRO is a song about the end of a relationship and who actually called it; “So who’s hand is on the switch anyways?” It's a swing style track with excellent trombone from Michele Fortunato. Time And Decay has an opening verse with an acoustic led impassioned pontification about getting old and being likened to an old, slow computer. The rest of the band then kicks in for a sped up country punk song about how we all turn into our parents (God forbid!).
At The Threshold is a slow, mournful broadside about how we are slowly killing out planet and we haven’t got long to do something about it. The longest track and perhaps my favourite Now (… and Forever!) links back to the opening song about sleeping with the television on and is a magnificent opus about God being dead, everybody hating the police and how to cope with how the world is changing – a quality track! The album's closer is A Spectacular Time, a synth laden, intricate song about the end of a relationship (or the end of an album?) with the closing lines – “I’ll never know if the moment was right, But I had a spectacular time.”
All in all, the album consists of some hopeful undertones to some personal and bleak topics.
Stream and download Now on Bandcamp and like Rent Strike on Facebook.
This review was written by Rich Bailey.
Posted by Emma Prew at 12:30:00