Snuff are back. Crepuscolo Dorato Della Bruschetta Borsetta Calzetta Cacchetta Trombetta Lambretta Giallo Ossido, Ooooooh Così Magnifico! (yes, seriously) is the latest from the UK punk powerhouse and, given all the difficulties that have come with writing, rehearsing and recording over the last couple of years, it comes relatively quickly following 2019's Fat Wreck released There's A Lot Of It About.
If you don't know the band, which I doubt but I guess it's possible, they've been almost constant mainstays in the UK punk scene for over 30 years. There's been inevitable line-up changes, side projects and mini-breaks over that time and the band stripped back to a three-piece to write this new album, but Duncan Redmonds remains perpetual, meaning not only do you know what to expect, you also know you're going to get a banger. 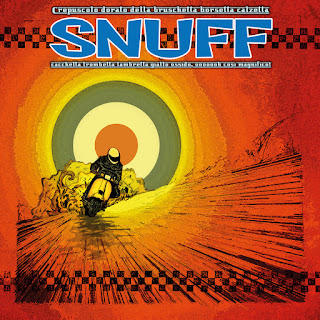 With 10 tracks, it's not the longest and only one of these tracks lasts more than three minutes, but what you get is a snappy 25 minutes or so of that instantly familiar Snuff sound. There's harmonies, singalongs and very distinct vocals galore. The expected horns, trombones and organ are all in there as well. Listen to it from start to finish and I think most will also agree having just 10 tracks is to the record's benefit – there's very little need for any skips here.
The first track is Looks Alright From Here. The opening few seconds start with the guitars, followed by drums and then cymbals before Duncan's frantic and unmistakable vocals kick in. It's the way all good Snuff albums start. Vintage stuff.
Green Grass Chippings is next. I think it had been pre-released as an online single, but I hadn't actually caught it before. It's one of my favourites on the album – absurdly catchy vocals – but not quite as the brilliant One Of Those Days which follows and is the best song on the album. Fish 'N' Chips then reminds me further of their very indisputable sound. You can't hear this and wonder 'who are this band?' and 'where are they from?' – patently Snuff and obviously British.
Snuff being Snuff also can't resist a cover and there's a classic here with their take on Curtis Mayfield's Hard Times. The band themselves refer to their sound as "Motown Punk" and this is as good a cover as they've done. In fact, when you listen to the whole album on repeat you'll hear Motown references and sounds all over the place.

Barba Gelata then starts with the sound of a British ice cream van before a three minute instrumental. It's the only song that feels a bit out of place, but I'm sure that's more me than most.
Lemon Curd gets me back on track before being followed by Stolen From View and Small F; all solid tracks before it finishes with Bing Bing – a Snuff catchphrase and a feel good song, the mid-pace of which winds the album down nicely.
This Snuff release probably won't rank as many people's favourite, but why should it? A band with this much back catalogue can't put out better and better records indefinitely and it's right that everyone should have their own personal best. But, it's fast, harmonic, raucous and distinctly Snuff and I love it for that.
The album is available on the band's own 10 Past 12 Records and Austria's SBÄM Records.
You can stream and download the album on Bandcamp and like Snuff on Facebook.
This review was written by Chris Bishton.