Something I always enjoy about the festival is that it offers the chance for us to see some bands that are new to us completely or are bands that don't very often find their way to England. I've taken the time to check out a few of the acts playing the festival and written a top ten list. I've avoided including bands such as Uniforms, Tragical History Tour, Goodbye Blue Monday, The Kimberly Steaks and The Murderburgers, who are playing their last gig at the festival, as they're a bit obvious and everyone reading this will know how good all those acts are. Instead I've picked ten bands that are new to me, ones I've never seen before or ones that don't come to London. 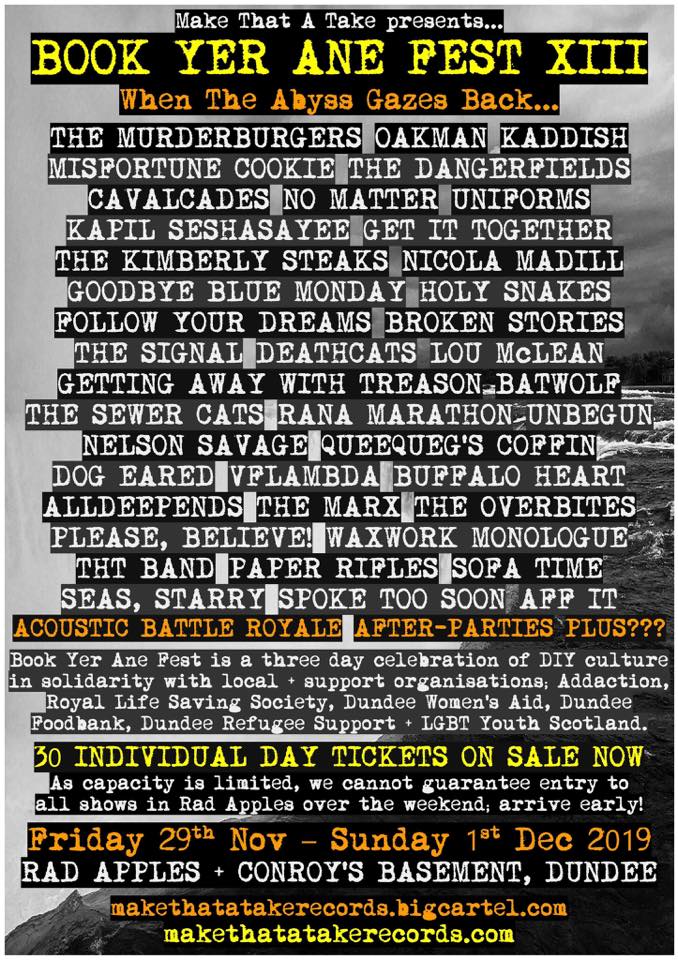 Batwölf
Dutch punk rock 'n' rollers Batwölf are perhaps better known for their previous band Black Volvo. Continuing on from where Black Volvo left off, Batwölf play heavy rock music with a punk swagger. They're a bit of a throwback but also have a sound that you don't often find in the UK punk rock scene. Listening to 2018's Spare No One EP, I'm looking forward to catching them live. I imagine it will be a lot of fun.

Broken Stories
This Perthshire folk duo offer something a little different to Book Yer Ane Fest. With just an acoustic guitar and a fiddle, Broken Stories craft these mesmerising tunes about life, love and loss. Broken Stories seem to be one of the Scottish scene’s best kept secrets and I'm certain that anyone checking them out for the first time will fall in love with them.

Buffalo Heart
Dundee's Buffalo Heart play sad and gritty emo punk rock music. Normally it's not my go-to genre but the beauty of a festival is being able to check out bands you wouldn't usually. Buffalo Heart could become my new favourite band that I didn't know I needed.

The Dangerfields
The Dangerfields are a thrash punk rock band from Belfast. From what I've heard from them this is going to be a very fast, frantic and energetic set from the band that will get everyone in Conroy's very sweaty. I love a relentless band like this and The Dangerfields are definitely one of the bands I'm most looking forward seeing at Book Yer Ane Fest.

Get It Together
Last time I made my way to Book Yer Ane Fest, I ended up missing Get It Together because of a Mega Bus that wasn't so mega. By all accounts, Get It Together played one of the best sets of that entire weekend and I was gutted to have missed it. Fingers crossed I won't miss another brilliant set from the hardcore band from Central Scotland. 2019's Live Free is one of my favourite hardcore albums of the year.

Getting Away With Treason
Berlin's Getting Away With Treason bring some fast, melodic skate punk to Book Yer Ane Fest. My first impressions listening to them is that they take everything you would expect from a band in the genre – fast technical riffs, pounding drums, soaring vocals, aggressive vocals, intricate fills – and manage to squeeze it all into one song without ever feeling like overkill. This is going to be something to see live.

Nicola Madill
I feel like I've seen Nicola Madill's name on a number of Make-That-Take Records gig posters and, judging from Madill's Facebook page, it's clear that Deeker thinks very highly of them. Crafting hauntingly beautiful Americana folk music, I assume everyone watching Madill will be absolutely spellbound by their performance.

This top ten was written by Colin Clark.
Posted by ColinsPRW at 13:13:00