Album Review: Someone, Somewhere by Brainflakes

Brainflakes is the solo project of Rockford, Illinois, songwriter Brendon Cave. After years of playing in different bands, he moved to Salt Lake City and began to focus on writing songs for his own release. Titled Someone, Somewhere, it was released by Hidden Home Records on the 1st of November. Combining punk, emo and indie music, Someone, Somewhere is four songs of vulnerable and intelligent music, switching between soft moments and crunching power chords. When the fine folks at Hidden Home sent this through to me I knew it was one I had to check out. 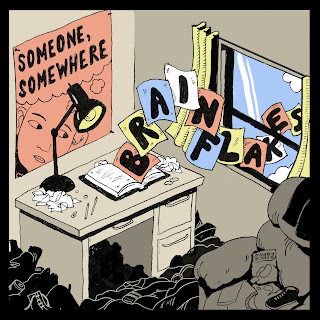 Someone, Somewhere begins with the song Royale. Beginning with a guitar sound that could be described as jangly and also crunching, it's not long before Cave's voice comes in and we're treated some superb raspy vocals. This isn't the case throughout the track though as there are times when things slow down and get a bit quiet. These contrasts keep things sounding fresh and have you wondering what's next. I loved the sing-along nature of the song. This is one of those songs that will really unite an audience with the band. Up next is Clay's Achin', starting slowly with Cave displaying a poppier, cleaner side to his vocals. Not for long though, as we hit a chorus where that superb raspy vocal returns. The song continues in this pattern, jumping between quiet and loud moments adding to the emotion in the track. Clay's Achin' is about being conflicted about life on tour – Is it worth it? Are you getting too old for it? Have you made it yet? Something relatable not just for folks in bands but for people who regularly attend gigs rather than doing the more traditional grown-up things like buying houses and having kids.

Cracking Yer Head is probably my favourite of the four songs on Someone, Somewhere. It falls more into the punk side of things rather than emo but still  doesn't stray far from the Brainflakes sound. Starting slowly before picking up the pace, this eases the listener into the song nicely before Cave's vocals really explode. It sounds as if the track is played at a slightly higher tempo than the previous song. This adds energy and I love that. The song is about going for your dreams but reaching that metaphorical glass ceiling and the frustration that brings. I felt like the song looks at the more realistic side of chasing your dreams but it not always being achievable. Last up is Leaving The Shire. What a fantastic choice as last song this was! The track begins very slowly, beginning with a little bit of organ before a slow, jangly guitar riff and some soft vocals join in. This section goes along for about half the song, you know something big is coming but you're never quite sure when as there isn't a build – instead the song just kicks into life without warning. This was great, it really added urgency to the song. A bit like Cave was saying "okay, let’s crack on with this." You can't help but want to shout along with fists high in the air to the track. This was the best way to finish this wonderful EP.

This is a great introduction to Brainflakes if, like me, you weren't aware of them before this release. Emo isn’t usually my go to genre but there was enough of the gruff, raspy punk sound that I enjoy to really keep me hooked throughout. Brainflakes could become a very popular band in the emo and punk circuits.

This review was written by Colin Clark.
Posted by ColinsPRW at 12:09:00