Album Review: Get It Together by MakeWar

One of the biggest pleasures I've had in punk rock in the last few years is watching the growth and progression of New York's MakeWar. I first discovered them when they were booked to play Book Yer Ane Fest in Dundee in 2016. I fell in love with their debut album self-titled album. I loved the emotion and honesty in the songwriting as well as the big hooks and sing-along choruses. Unfortunately, I missed their set at the festival due to a Mega Bus and a traffic jam. The following year, they released the excellent Developing A Theory Of Integrity on Red Scare Industries and I got to see them play a packed out show at The Fest In Gainesville as well as a show to about seven people in London. This month the trio released their third album, this time on Fat Wreck Chords, titled Get It Together. The couple of singles they released before the album came out really wet my appetite for the album and I couldn't wait for its release date. 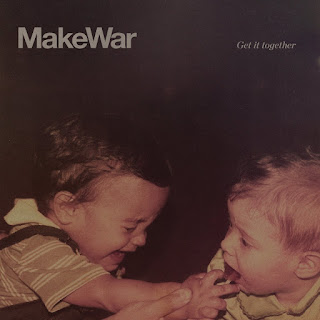 Moving to Fat Wreck Chords will surely put a lot more eyes onto MakeWar so this opening track had to serve as a great introduction as to what the band are all about. Hopeless Dreamer not only does this but really leaves you wanting more. (It’s a good thing there's another ten songs following this!).The track actually starts pretty quietly with the volume and tempo of the song gradually building as the song progresses. Much like Developing A Theory Of Integrity, just from this opening track it's clear that Get It Together is going to be full of massive sing-alongs. Up next is My Bones which is a song about dealing with your anxiety issues. From the start there is such a big feeling to the song with an explosive beginning that hits you with a jolt. MakeWar lead singer Jose is a fantastic storytelling songwriter, making it seem as if he's having a private conversation with you. This really helps make you feel involved with the song and lets you feel what he going through in the song. It also makes it very relatable for anyone who is going through similar things. No Excuses is perhaps the heaviest sounding song MakeWar have released so far, actually drawing comparisons to Rise Against. The heavier sound goes along with the angry tone of the song. It's about all of the absolutely terrible behaviours directed at minorities. It's ridiculous that in 2019 songs like this are still being written as people STILL can't see past differences that don't matter in the slightest. The lines "now we fight about the differences, that some of us just carry, in our blood and in our genes and the place my mom was born, retired men are freaking out with all these kids, that are coming out, leave them alone! and continue living your boring reality, they are superstars, and you are nothing!" were really powerful.

After the ferocity of No Excuses, the next track Squeeze slows things down somewhat. It starts softly before gradually moving into a grunge sound that was quite unexpected but very well done by MakeWar. Going back to the topic of mental health, Squeeze tackles the subject of dealing with a panic attack and how it often feels like you're going round in circles. Like I said before, this grungey sound was unexpected but it gives it a moody tone that I thought worked exceptionally well for the subject of the song. It's also great to hear MakeWar trying new things on their third album. No Más is another song that sees MakeWar doing things a little differently. Showing off a bit of the band’s latino heritage – Jose is from Venezuela and bass player Edwin is from Colombia – the verses on the song are sung in Spanish and the choruses in English. This is a great tool in the getting the track’s message across. Translated into English, No Más means No More. The song is about being different, not sticking to what's expected and clichés. On my first listen of Get It Together, one of the stand out songs was American Futbol. The song is about breaking down borders and not putting up walls and working together with everyone. It seems a pretty simple concept when you think about it (oh the world, what are you doing!). There's a line that sums up the message of the song perfectly – "we are all in this together, on this tiny marble, made out of dirt and water." The song also talks about how the politicians and government use things like border issues to distract from the real issues such as global warming and distribution of wealth. This is a track that really makes you think about the world and what's really important. Sails was one of the songs that was released in the lead up to Get It Together. This mid tempo track oozes with emotion. It's kind of ballady as the band sing a song about travelling to a new place and looking to make a better life for yourselves. I can see why this track was picked as one of the singles as it's more accessible for new listeners of MakeWar, it's a bit poppier than many of the other songs and has some great hooks.

The eighth song, Inmunda Realidad, is completely in Spanish. The track’s title translates as Unclean Reality and the song is about the racist abuse immigrants receive in America (and sadly I'm sure in many other parts of the world) when all they want is to live their lives happily and safely. This is a heavier sounding MakeWar song with some chunky bass parts. It sees the band taking steps into the melodic skate punk genre, something that would really attract fans of the traditional Fat Wreck Chords sound. Oh, Brother is another track that the band released in the build up to Get It Together and boy did this song get folk excited for what was to come. It's an autobiographical song as Jose sings about discovering punk and it becoming the most important thing in your life, then getting stuck in a life you hate because you feel like it's the right thing to do, before eventually realising what you should be doing with your life. It's an inspiring song, particularly the final verse as Jose sings "I want you to follow, what makes you feel different, I want you to struggle, pay your dues, get blisters, I want you to dream big, bigger than I ever did, I want you to fight for it, against the odds, I want you to fall in love again, against the rules, I want you to lose your voice too, screaming your heart out! Sing your heart out!" The penultimate song is titled Hands On The Tyrant. This is a song about learning all you can about a political situation in another country from somebody who has lived there before making judgement and getting involved. This track really did make me think about my approach to foreign politics and how I have very little knowledge on what's going on in many parts of the world. Last up is the album’s title track, Get It Together. The song is about living in the moment and not spending all of your time glued to your phone. Take the time to be nice to people, help and support your friends and the things you care about. We're all guilty of spending too much time staring at nothing on our phones and we could all improve ourselves if we did this less. A great, positive and inspiring way to end the album.

MakeWar are continuing to get better and better with every album they release. On Get It Together, MakeWar tackle a variety of different issues in the world – whether it be mental health, politics or just growing up and have made an album that will be relatable in some aspect for everyone. They have thrown in a few different styles to their sound but still sound very much like MakeWar. I'm sure this is, in part, due to Jose's distinctive gravelly vocal. If you're new to the band, Get It Together is a great place to start before going back through their discography. If you're a long time MakeWar fan, Get It Together is another great step on the band’s continuing journey. I hope it doesn't end any time soon!

This review was written by Colin Clark.
Posted by ColinsPRW at 16:33:00