This past month I seem to be slowly stumbling upon more bands from the Australian ska punk scene. Recently I reviewed The Donald Trumpets’ excellent EP Waterboarding At Guantanamo Bay and now I've discovered The Kujo Kings who are from Melbourne. In March, the seven piece released their debut album Royal Danger. Featuring thirteen songs of energetic and fun ska punk, I felt like this one was going to take a while to review as I imagined I'd spend a lot of time dancing around my living room! 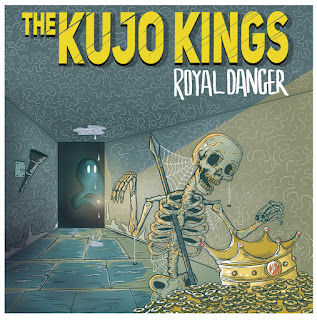 Royal Danger begins with Party In The A.M. Starting things out with a big horn filled introduction gives the beginning of the album a grand feel. Soon enough the tempo is upped and within the first minute of the song The Kujo Kings will have you skanking away. It's a fun song about the benefits of day time partying when you should probably be out earning some money. The second song is named Bass Fish and sees The Kujo Kings lead singer Wes takes on the roll of a sea bass, but not just any old sea bass. The singing one that's on those lovely plaques that adorn the walls of classy people’s homes all over the world. It's silly but incredibly entertaining. It's not the full on skankfest that the opening track was but that's because it's supposed to be quite a sad song. That said there are plenty of moments that will have you throwing your knees up. Birthday Suit was first released as a single back in September 2018. I'm sure you have worked out from the song’s title that it's about wearing your birthday suit (being completely naked). Again this song is kind of ridiculous but it's such a good time. I can already imagine this song live, being played with some massive smiles and most likely some folk stripping off!

The fourth track is titled Strange. This song takes you on a series of highs and lows. Whether it's a slowed down reggae feel or some up-tempo, brass fuelled ska, Strange has you constantly guessing what's next. The track is about being comfortable in your own skin and not worrying about people thinking that you're different. Diggin' sees The Kujo Kings add a bit of an 80s pop and sci-fi sound to their ska style. It seems like a really odd combination but my gosh it works. I assume Diggin' is about life in a game like Minecraft where you start from scratch building your world and continue to grow. It's very clear by this point of the album, The Kujo Kings aren't a band that takes themselves too seriously and they have this ability to write quite varied and very silly songs. Zombie Bride begins with a sweet bass line that immediately gets you quite chilled out before a wonderful brass line puts a big smile on your face. It's a slower reggae pop track about falling in love with a zombie. I can't imagine there are any other reggae songs about this but if there are please link them in the comments. Even though the song is again a bit of nonsense, it actually allows the band to show off what fine musicians they are as well as letting Wes show off a great vocal.

At The Market brings the tempo back up with an insane brass introduction that will have you exhausted before the vocals even begin. Thankfully, for me, things do slow down after that fast paced intro with a mid-tempo track about going to the Asian food markets and meeting all kind of different characters along with trying many different dishes. The Kujo Kings really don't stick to the traditional song topics! The long instrumental midway through the song was a big highlight for the whole album. Flappy Bird is a song about how no matter what amazing things you achieve in your life, the thing you're most proud of is your top score on a mobile phone game. I'm not sure if this is just The Kujo Kings being silly or a bit of a dig at society who seem to put too much time and energy into silly games. Either way it had me smiling throughout. I really enjoyed how the list of achievements gets greater and greater throughout the song, really building the scene up. It starts in a bouncy fashion and continues in the vein throughout – there won't be a single person who will keep their feet still listening to this one. My first thoughts when I heard the ninth song, Dragon Cool, is that Wes is back in character, this time playing the leader of a dragon club. However, as I read deeper into the lyrics it's all a metaphor for smoking weed and how people should just accept it. Lyrically the song does some great work creating an image in your head of what the music video might be like.

The tenth track on Royal Danger is named Wifi Today. There's a moodier tone surrounding this song. The brass is as bouncy as ever but it also feels as if there is a general darker feel to the track. It's about how reliant we have come of the Internet nowadays and the rage that people go through when it goes out. It's on this track that I really came to appreciate just how good The Kujo Kings horn section is, giving the best in the world a run for their money. Clean Underwear, Fresh Tupperware comes next. The song is about the struggles of living by yourself and wishing you were back at home with your folks. This is probably one of the most relatable songs for most people on the album. Lyrically it's full of humour but there is also a sadder subtext that could really hit home. The penultimate song on Royal Danger is The Lonely Pilot. The track starts slowly before picking up the tempo in the second half of the song. It's about looking out for your friend who has had a hard time because of other people and being there for them. The final track on the album is titled Get Out Your Cash. It starts out with a heavy bass line before the brass comes in giving the song a bit of a swing style that will have plenty of people having a dance. The bouncing bass takes the lead throughout the verses as Wes sings about committing a bank job. It's quite a laid back song given the subject matter, you might expect a high energy and adrenaline filled number but not from The Kujo Kings. Instead the album finishes with a big barroom sing-along of "get out your cash" repeatedly. A surprising but, of course, fun way to finish the album.

I loved this album. Fun is a word I used a lot during the review but there isn't really a better word to describe it. Royal Danger is a bit throwback to the days where ska punk bands didn't take themselves as seriously but it still has a fresh sound to it. If you're a fan of bands such as Reel Big Fish or the Mad Caddies, you will love The Kujo Kings.

This review was written by Colin Clark.
Posted by ColinsPRW at 12:22:00