The Bouncing Souls are not only an important part of the modern punk rock scene throughout the world but also a very important band to me personally. I can't think of many bands that have empowered me more than The Bouncing Souls with their songs about being yourself, going for what you believe in and making memories with your friends. This year marks thirty years of The Bouncing Souls and to go along with a massive tour the band have released a six song EP named Crucial Moments on Rise Records. 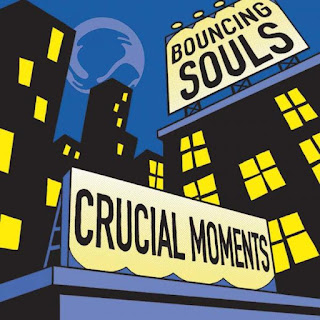 The EP begins with the title track, Crucial Moments. Taking the more mature sound that the Souls have grown into since 2006's The Gold Record, the track talks about continuing to make special memories with your friends – and these guys have made countless together over the past thirty years. This song is basically a thank you for the life that being in The Bouncing Souls has given these New Jersey heroes. Up next is the minute and a half 1989 that harks back to the band’s early years. The track is fast and frantic as lead singer Greg Attonito yells out a song talking about the crazy times that occurred in the early years of the band. The final verse of "love you stay true, with you make our own rules, believers achievers day dreamers, looking for something" is basically a re-working of the band’s ethos throughout their entire career.

The Bouncing Souls have never been against writing super sweet love songs and that's exactly what Favorite Everything is. Upbeat, melodic and catchy as hell, it won't be long before you're singing along with Greg and the boys. This is a song that will get even the most hardened of punk rockers singing along in the pit. This is something that the Souls have managed to do a lot during the past thirty years and I'm happy to see that this tradition is continuing on Crucial Moments. The fourth track on the EP is Here's To Us. This song is about celebrating the bonds of friendship and staying true to yourself – staples of the Souls songwriting playbook. Played at a mid-tempo pace, Here's To Us is a big anthem. The harmonies that end the song are some of the best in the band’s careers, with Greg's vocal layered over Brian and Pete's harmonies sounding incredible.

The penultimate track on the EP is named 4th Avenue Sunrise. Picking the pace back up, this song shows a more hardcore Bouncing Souls. Brian Kienlen's bass playing is a big highlight on the track. He has to be one of the most underrated bass players in the scene, you can always hear a bass line and automatically know it's a Brain Kienlen one. The song is about finding light at the end of a dark period, using the imagery of watching the sunrise over a New Jersey beach. The final song, Home, is about having your own special place that becomes your safe zone where all of the troubles in your world can't get to you. As you might expect from the band, the chorus is absolutely huge and, like Favorite Everything, you'll be singing along with the band as loudly and passionately as you possibly can. The Bouncing Souls don't just write songs, they write anthems.

I do love The Bouncing Souls and Crucial Moments is a superb addition to their pretty much untouchable discography. I don't know why you've read this review, you already know that The Bouncing Souls are legends! Here's to many, many more years of great songs and special memories.

This review was written by Colin Clark.
Posted by ColinsPRW at 14:50:00