I first became aware of Croatian pop punks Trophy Jump after hearing their December 2017 debut Depression Club. Since then, the four piece have been making a bit of name for themselves. So much so that UK DIY label Horn & Hoof Records are involved in the release of their second EP, Haphazard, along with JeBoTon (Croatia) and Punk & Disorderly Records (Canada). When I was sent the EP, I was quite intrigued to see how the band had progressed. 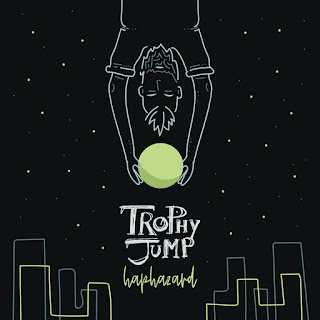 Haphazard begins with Comfort Zone. Quickly tackling the theme of mental health, notably trying to reach out to a friend who won't leave the house (their comfort zone). Starting out with just a bit of guitar and vocals is a great way to get the listener to really grasp the message of track as well as quickly encouraging them to learn the words. This is a mid-tempo pop punk track that's full of hooks and is extremely catchy, setting a marker for the rest of the EP. Up next is Not That Kind Of Guy. Clearly taking influence from Fat Wreck legends Lagwagon and No Use For A Name, this is a melodic skate punk song with pop hooks. The song talks about drug users, how the band believe if people want to do drugs it's up to them but it's not something they are interested in. The song really hits its height during its final section as the band repeatedly sing "I'm not that kind of guy" to close out the track.

The third song is titled Bicycle. This was the stand out track on my first listen of Haphazard. Beginning with a thick, rumbling bass line that really drives the song’s opening before lead singer Antun takes to the microphone. The song is about having your bike stolen and how the perpetrator sucks. Bicycle had me singing along almost immediately with a massive smile on my face. The penultimate song is Chicago Kid. Opening up with a punked up version of a surf rock riff before Antun seemingly does his best Ben Weasel impression with some snotty and aggressive vocals. This is where Trophy Jump really get to show off their musical ability with plenty of room for a guitar solo within the snotty pop punk style. The final track is titled Remete Hills. It's a more melodic song with softer vocals giving the whole track a retrospective feeling, jumping on the familiar pop punk bandwagon of hometowns. For Trophy Jump, this takes on a whole new meaning though as they've spent so much time far away from Croatia because they've been in the United States touring. I can imagine a music video for the track with shots from their time on tour interlaced with shots from Croatia. You can have that cliché idea for free chaps. This was a great choice for the final track as it really gets you thinking about what you love about your hometown and puts a smile on your face.

I seriously enjoyed Haphazard. Taking their influences and giving it a fresh sound shows Trophy Jump are a band that are forward thinking and I enjoyed the variety on the subject matters throughout the EP. Given the huge renaissance that pop punk has had over the past couple of years I'm sure it won't be long until Trophy Jump are discovered by a much bigger audience.

This review was written by Colin Clark.
Posted by ColinsPRW at 16:14:00