Album Review: Y'all by UnderTipper

UnderTipper are a three piece band from Cincinnati, Ohio who formed late in 2015. The band, which is comprised of Tavis Disgraceful (guitar & vocals), Jeff Forton (bass) and Drew Bogner (drums) recently released their second album Y'all. I found out about this due to the greatest tool for music discovery (aside from going to gigs) - Bandcamp. I loved it instantly and had to give it a review! 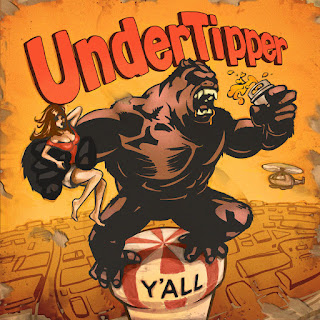 Y'all begins with the song Stayed Up Too Late. On my first listen of Stayed Up Too Late I decided instantly that this is one of my favourite songs of the year. It's a simple song about not getting enough sleep. Starting with an alarm clock going off we have a mid-tempo punk track with a chorus to die for. The track moves up a gear and the whole band shouts "Stayed Up Too Late, Got Up Too Early." Love this song! The second track is titled Break Away. Though the song doesn't jump out at you like the previous song there is a restrained subtlety to the intro that gets you hooked. I like that already on the second track of the album UnderTipper show they can write a silly song (Stayed Up Too Late) and more of a serious song in Break Away. Break Away is about getting away from the bad situations you find yourself in and finding something better. The opening guitar of the third song Caffeine instantly made me think about 90s Lookout era pop punk music. It's a punchy song that uses drinking caffeine on a long journey as a metaphor for pushing your friends to their limit with your behaviour. I really enjoyed the ending of the song that featured a delightful breakdown with some great harmonious lines of "I'm Not Falling Asleep" that leads into one final chorus. Green Paper is another great song. Being from the UK it took me a little while to work out the meaning of the song but I think it's about not being able to be bought as a means of saying sorry. In the UK our money isn't green, hence my confusion. This is another punchy sounding song that makes the most of the band's ability to delivery fantastic gang vocals. All songs should feature gang vocals.

Contact is the name of the fifth track on Y'all. The song is more of a subtle and restrained song, almost like the band are having a bit of a rest midway through the album. This more restrained style really allows Jeff's bass and Drew's drums to shine through with the bass in particular standing out. Contact is about staring at your phone and longing for somebody you care about to message you. Something very relatable. The final section of the song was just great, there's a nice little breakdown and then some beautiful harmonies to finish the song off. Nothin's Ever Good Enough feels much heavier and darker than anything we've heard so far on Y'all. The upbeat pop punk sound has gone and has been replaced with a much more downbeat, straightforward punk song. Musically it's kind of similar to Hot Water Music but I do think the whole song could have done with a bigger sound to really drive home the downbeat nature of the track. Following Nothin's Ever Good Enough is Red Light. This is another song I really enjoyed and is one I can definitely imagine being superb live. It's about not doing what you're told and going full steam ahead with your plans even if it seems reckless. The mood is definitely upped again here. Bicycle is a fun little song about the love of your pushbike. It's all kind of silly but it's fun. I don't think we've had a good punk song about riding a bike since The Bouncing Souls stab at the topic with The BMX Song back in 1995.

Call The Police is song about the frustration with the police not seemingly being able to do their jobs properly. The band use some examples of shocking crimes and the nonchalant attitude of the force. It's an instant ear worm song. I really love the tempo of the track - it's bursting with an infectious energy and is difficult not to get wrapped up in. This infectious energy continues on the following song, Going Home Alone. Definitely moving into more of a pop punk territory with the fast paced sing-along track, the song is about the pitfalls of being that friend who always going home by themselves whilst their friends always manage to hook up and how lonely this makes you feel. It's a topic that isn't often spoken about in song but is another that I feel could be hugely relatable. The penultimate song on Y'all is named Taco Meat. Taco Meat is a bit of a silly song but it's also about people liking different things and that being completely okay. That's pretty much all there is to say about Taco Meat. Y'all is completed with the song Whadda Ya Say. I really felt like this song had a lot of pressure on it to finish a good album off on a big high. Well Whadda Ya Say certainly delivers. It is one of the catchiest songs on the record and will have you screaming the chorus at the top of your lungs. The track is about looking at your life and proudly questioning your decisions and perhaps realising it's time to make a positive change. I do enjoy it when an album finishes on a positive.

UnderTipper were another random Bandcamp discovery for me and proved again to be just an awesome find. If you enjoy gruff, melodic, sing-a-long pop punk that is inspiring, relatable and at times a bit on the silly side then you need to give UnderTipper a chance. I wanted to make a funny joke about how that's my OverTip but that's a truly terrible joke… I'm very sorry.