Album Review: A Good Day For The Damned by Jaya The Cat

Since first seeing Jaya The Cat in 2012 they have quickly become one of my favourite bands to see live and to listen to. Their last album, 2012's The New International Sound Of Hedonism, became one of my all time favourites. Look out for a Future Classics column on the album soon. Now the band, from Amsterdam via Boston, are back with a long awaited brand new album titled A Good Day For The Damned. I had high hopes for this being another cracker. 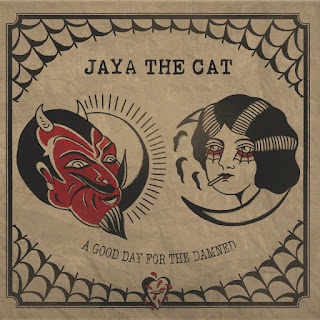 If you've not heard Jaya The Cat before they play what is best described as reggae punk with hints of ska. Over the years the theme of much of the band's work has been living your life to the fullest - whether it's with loved one, having a postive attitude or enjoying all of life's excesses (legal or not). If you've ever seen Jaya The Cat Live you'll know that frontman Geoff Lagadec is often not particularly sober and stumbles around on stage. This all adds to the charm of the live show though, with a great sense of "who knows what on earth is going to happen?"

The thing I noticed on my first listen through of A Good Day For The Damned is how much more of a reggae sound that the album has compared to previous albums. If this album was released in May this would be the album of the summer. Instead it's doing a fantastic job of warming up our chilly winter. Geoff Lagadec has one of my favourite voices in the genre. There's a gruffness that you might expect from any orgcore punk band that works spectacularly well with this reggae style. It's something that really helps Jaya The Cat stand out from their reggae punk rock contemporaries. On all fifteen tracks of A Good Day For The Damned I felt completely mesmerised by Geoff's vocals as he tells us a charming story in every song.

Lyrically A Good Day For The Damned is absolutely beautiful. The album is jam packed with some of the most beautiful love songs I've ever heard and not just in the realm of punk. Songs such as Huddersfield Rain, Fucking In Love, Black Heart, A Good Day For The Damned and The Streets Of Shoreditch just made my heart swell with hope and happiness. It's all written in such a hugely positive way that it's difficult not to get swept up in it all. Geoff's in love, I'm in love, we're all in love!

As incredible as Geoff's lyrics are on the album a lot has to be said for the whole band's musical efforts here. Throughout the whole of Jaya The Cat's career there has been a big turnover of musicians joining and leaving the band so it will come as no surprise that Jaya The Cat have a new guitarist for A Good Day For The Damned, in the form of ex-Mr Shiraz member Karl Smith (who did previously provide live keys). Listening through the band's discography you can hear how the band have progressed. It is almost as if as the band has moved forward they've picked up better and better musicians along the way. Like on International Sound Of Hedonism, there are brief samples and bits of brass included, only adding to the awesome Jaya The Cat sound.

A Good Day For The Damned is another incredible effort from Jaya The Cat. They have to be thought of as one of the most prolific bands around and not just under their reggae punk umbrella. Like I said after I'd finished reviewing Aerial Salad's Roach album, A Good Day For The Damned is another album that has completely ruined what I thought was my top ten of the year. This could place very highly on the list - it's definitely the best from the ska/reggae world of punk rock. Go check this out and feel happy and in love.

Stream and download A Good Day For The Damned here: https://jayathecat.bandcamp.com/

The review was written by Colin Clark.
Posted by ColinsPRW at 12:13:00