For my money Bristol five piece punk rockers The Run Up are one of the UK's best up and coming bands. Earlier this year they released an excellent single named Sink Or Swallow / North. Imagine my excitement when I received an email offering the chance for a press copy of The Run Up's debut LP for review. It was high! The self titled LP is also being released on the band's brand new record label Real Ghost Records as well as Get Party Records in the USA. 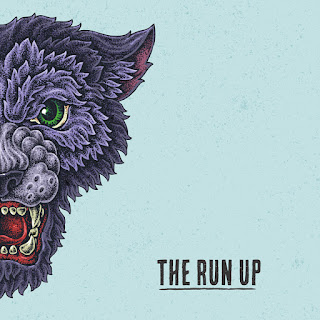 The album starts off with the song WKND. I love the opening lyrics of the song - "We're Back, And It Feels As Good As It Ever Has." Just a perfect lyrics to begin a new release. For those who haven't had the pleasure of hearing The Run Up yet they play a great style of melodic punk rock similar in sound to Iron Chic, Red City Radio and Hot Water Music. It's passionate and will get you singing along, what more could you want? WKND gets the album off to a very strong start. Following this excellent opening track is the equally great Busted. Beginning with some sublime guitar work before lead vocalist Larry comes in and the song just explodes with energy. As the song goes on you can feel the energy building throughout, all the members of The Run Up do an fantastic job building this song up and making it hard for you not to want to be involved. What a great song Line 'Em Up Is! Starting off fast, the track hits you immediately before transitioning into a slower melodic section that will again get you singing along. The breakdown is ace, with Larry being joined by the rest of the band for some exquisite gang vocals. Gang vocals are always the best.

The fourth song on the album is Shark. Shark is one of those great songs where the vocals and guitars seem to go off on their own melodic paths during the verse and meet up again for the chorus. This technique somehow gives an even bigger emphasis on the chorus. More Colours brings us to the halfway point of the album. The beginning of More Colours is very interesting. It kind of feels like the track starts halfway through the song, like you've somehow skipped a big portion of the song. I don't think I've ever felt like that about a song before so I'm not quite sure how I really feel about it. It's certainly unique structuring. Following this song is Learning Loss, the song that stood out to me the most on my first listen through of the album. It starts off with some great layered guitar work from Nick and Charlie accompanying some thumping drums from Harry that just give the impression that when the vocals come in this is going to be great. And do you know what, it really is. This song does have just a little bit of Iron Chic about it but that is something that I'm always okay with. Learning Loss is an emotional song about struggling to cope with losing loved ones and working out how to grieve. The breakdown that slowly builds up to that final chorus is blinding. Potentially The Run Up's best song yet.

Hurting So Much It Laughs is the album's longest track and therefore has that feeling of epicness surrounding it. The highlights of the song start around the midpoint of the track with an extended breakdown that leads into another huge chorus. The shift in melody is superb and the music that backs Larry's vocals just drives the song on to its big conclusion. The "whoa-ohs" that kick off Before feel absolutely perfect for this genre of punk rock. I hadn't thought about the album missing any "whoa-ohs" until this moment and now they've arrived they weirdly feel very welcome. I can already imagine this song being played live and having some extended "whoa-ohs" with the crowd. What an atmosphere this would create. The penultimate song Terrance starts with more of a skate punk sound, this was a nice change of pace. It feels like one of the hardest hitting tracks on the album, as if The Run Up are angry. The Run Up have managed to switch up their sound a little bit whilst still remaining very much like The Run Up. Terrance is a song about the strong bonds of friendship. Finally we have Sociopath's Salute. Wow, I loved the opening guitar on this song. It's poppier than the previous songs and feels really uplifting. Sociopath's Salute is a song about chasing your dreams no matter how absurd they might seem. I love the line "Don't Quit Your Daydream." That's a tattoo worthy lyric and a mantra to live your life by.

The Run Up have delivered on the early promise of their EPs and singles and created an absolutely stunning debut album. Despite this genre of music being filled with similar sounding bands, I can see this album being one I come back to again and again. I feel like it's going to be one I forever find new little bits that I love with every listen. If you don't know who The Run Up are yet, I feel like this is your chance to say I knew them when they just started before they become one of the most popular bands in the UK punk scene.

This review was written by Colin Clark.
Posted by ColinsPRW at 13:06:00