The Mighty Bossmags are a band like no other. The band describe themselves as "raw, experimental and bizarre groove punk 'n' roll potion concocted of ska, swing, funk and synth driven electronic flavours." Based in Warrington, the band just released a brand new album on Bredda Records and Anti Pop Records named Curio Cabinet. Let's say this - it was a very interesting listen. 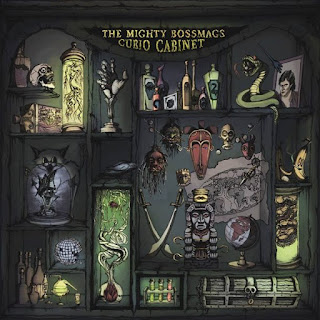 The intro gives you a feel of what you should expect from Curio Cabinet. It has a pirate nightmare theme, with a spooky voice that you might hear telling tales at one of those odd sideshow fun fairs you see on the TV. The album starts properly with a proper skankfest for the song Ghost Ship. It's upbeat and listening to it will get your knees high immediately. There is a bit of a Celtic theme to go along with the ska so as I'm sure that you can imagine it's a lot of fun! The horror theme of the album is very apparent on Withered Hand with the synth adding a spooky atmosphere to the song. To add to this atmosphere there are plenty of cackles added to the song that might give people nowhere near as brave as me the willies. The fourth song Gazeebo Anthrax is what I assume is the closest The Mighty Bossmags will get to a traditional punk song. It's fast paced, with one hell of a catchy chorus. It's obviously alot of fun to listen to and will get you smiling from the first chorus. White Limousine is more of an old school rock 'n' roll track, you know, with a spooky vibe. The song takes a strange break midway through with just some bells jingling before the song builds up again, with the inclusion of an engine running. The breakdown in the middle of the song was so unexpected I actually thought that a new song was starting.

Poison Tree starts with a pounding drum beat and some keys, showing off a jazzier side of The Mighty Bossmags unique sound. Weirdly I'm kind of reminded of Muse on this track, at least at the beginning as halfway through the song transforms into more of a folky sounding song complete with mandolin. Track number seven is named Too Much. Blending a mix of ska, punk and psychobilly, it's another unique sounding song that will get you dancing your night away. Too Much is a song that does an excellent job of showing what good musicians the folk in The Mighty Bossmags are, taking a mix of styles and moulding them together brilliantly. One of the strongest songs on Curio Cabinet. It's Alright is another more straight forward punk rock song. Musically it's one of the heavier sounding songs on the album and is just a fun no-thrills number that does its job well. After all of the spooky pirate themed numbers it's a bit refreshing to hear a more traditional (for The Mighty Bossmags anyway) song. Waste Of Time is a song that switches between straight forward punk and ska brilliantly. At one minute you can be banging your head before you find yourself skanking around your room before going right back to banging your head. Something I've noticed that this band do very well is switch up their styles in songs. It keeps you always guessing.

Rise And Fall is the album's longest track. Beginning with a strong bassline, we are then treated to a lovely piece of crust punk that gets you swaying before a big sing-a-long chorus comes in. Soon enough things are switched up and that spooky sound that could give even the bravest of kids the heebie-jeebies comes in accompanied by an excellent guitar riff. This long musical interlude is soon interrupted by some super fast paced ska and one final chorus to finish things off. This song is all over the place in the greatest way. Ghost House is a fun horror punk tune. To me it sounds like the theme to a so-bad-it's-good horror comedy b-movie. I don't have much else to say about this one. The penultimate song on Curio Cabinet is named Johnny The Claw. Johnny The Claw is a plodding rock 'n' roll song that begins as a real foot stomper. As things progress the spooky pirate horror theme sneaks into the song. I particularly enjoyed the song's energy as the sound grows and we get a passionate ending. Finally we have the song Banana. This is a very apt song title as the song is absolutely bananas. Just listen to it!

Curio Cabinet is easily one of the most unique records I've ever heard. It's like nothing you've ever heard before. This is why I really enjoyed it. Honestly I had no idea what was happening half of the time but I think that's part of the fun of the album. It takes you out of your comfort zone and has you smiling the whole way through.

This review was written by Colin Clark.
Posted by ColinsPRW at 12:24:00