I don’t think there are many better ways to spend a Sunday than at the New Cross Inn for an all dayer. It’s especially nice when you get a line-up that’s just an absolute mates fest. This was the case on Sunday the 15th of May when SKIV threw a party to celebrate the launch of their debut full length, No Context Bangers. They put together a stacked six band line up which also featured The Overjoyed (who they were on a UK tour with), Triple Sundae, Shackleford, Girls Like Us and Not The Face. 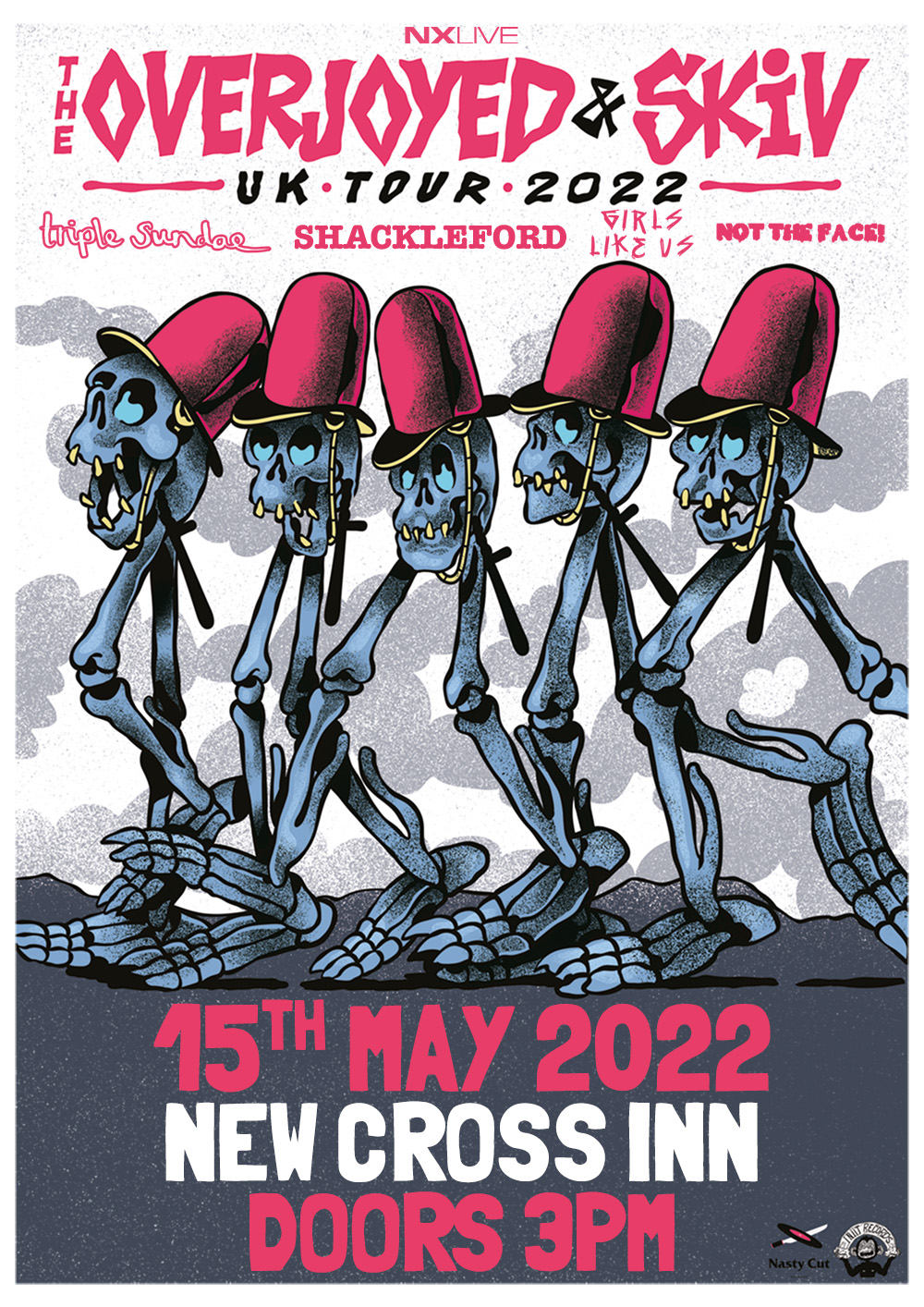 Opening the show were Brighton punx Not The Face. Not The Face are a new band on the scene but I recognised their lead singer Cat from their time in Demon Smiles. It’s great to see Cat in a new band as they have a fantastic vocal. It was great to see Not The Face on stage. They didn’t take things too seriously and were just having a great time together. This sense of fun was a great way to start what was, in essence, a celebration and Not The Face were a great pick to start things off. The band themselves play a straight forward punk rock sound reminiscent of 90s Fat Wreck but also threw in some ska upstrokes for good measure. I expect Not The Face will be a band I see many more times over the next few years. 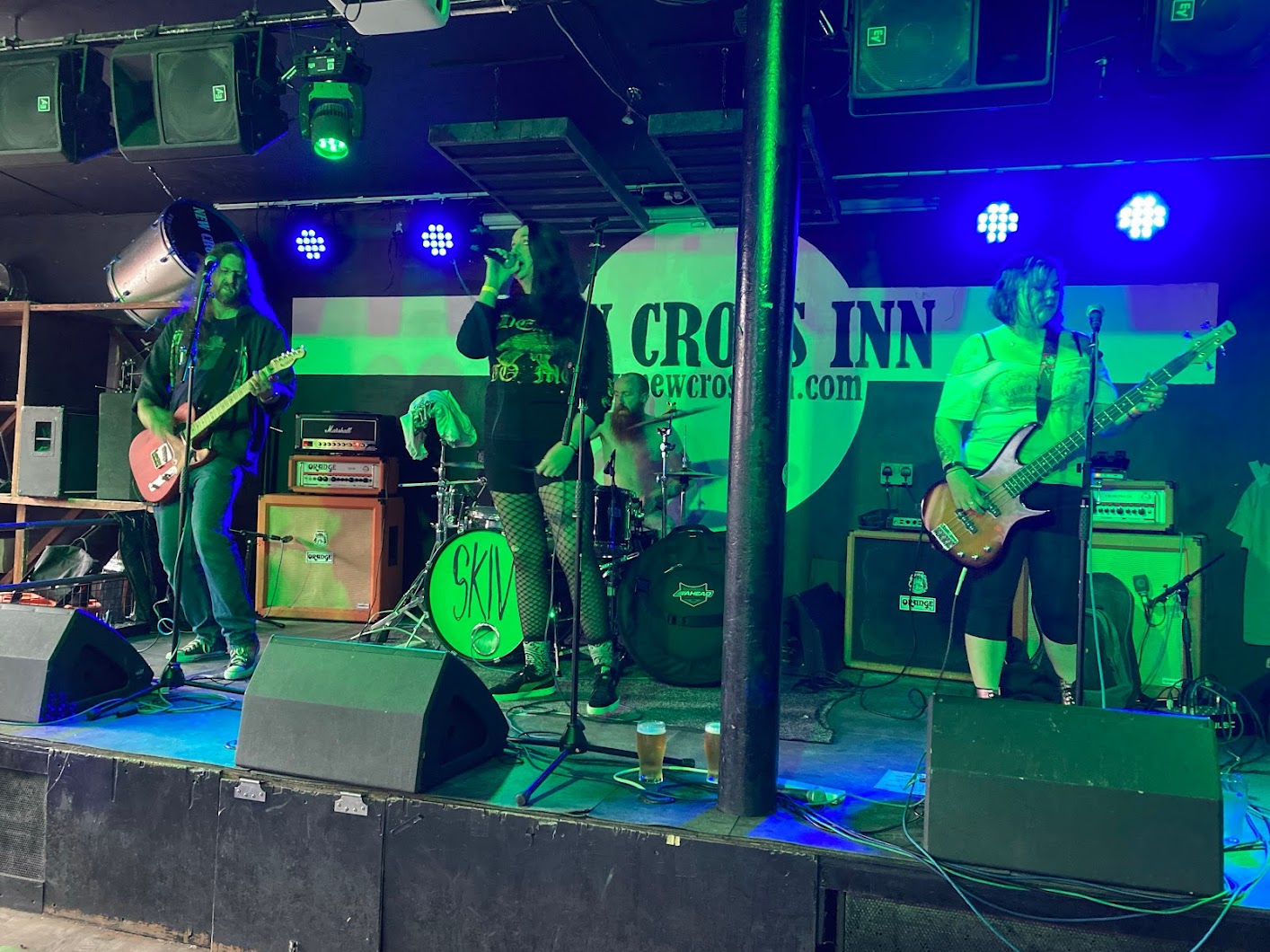 Next to the stage were Girls Like Us. Unfortunately, due to some technical problems, the band ended up starting their set half an hour later than planned. That coupled with the half hour allotted for set changeovers meant there was an hour long wait between Not The Face and Girls Like Us. This did unfortunately take away some of the momentum of the gig and, even when the band did eventually get going, the sound didn’t seem quite as good as it usually does at NXI. Something I didn’t expect to see was SKIV’s Conor on guitar for the band. I’m not sure if they are a member of the band or they were filling in for someone but it’s always nice to see Conor on stage. Girls Like Us play 90s style grunge inspired riot grrrl punk and, despite the technical difficulties they had, you’ve got to admire the energy and passion they put into their set. Much like Not The Face before them, it was great to see the band having a lot of fun on stage and I’m definitely keen to check them out again – hopefully with better sound next time! 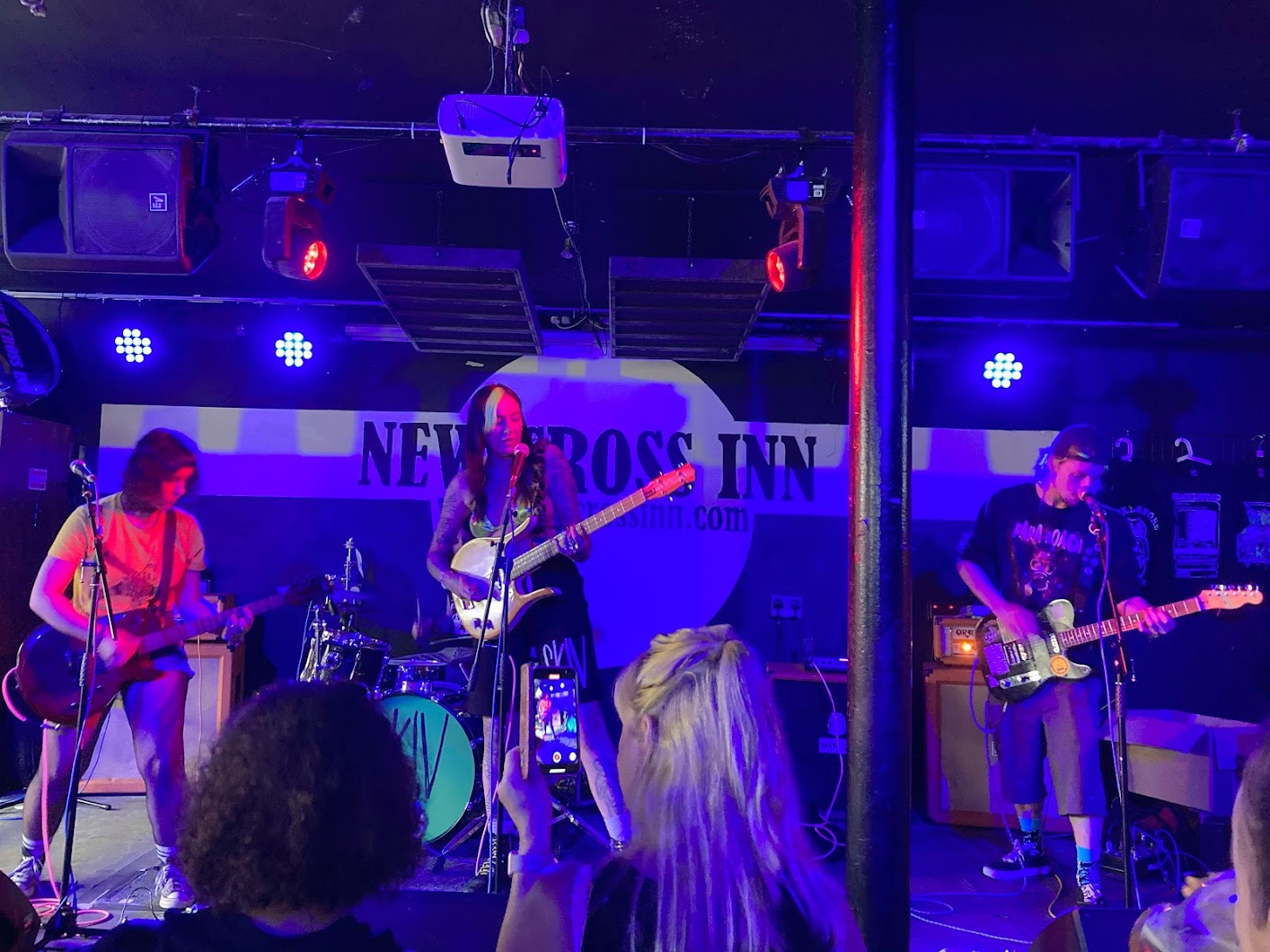 Shackleford are a band I’ve wanted to see live for absolutely ages and the wait was finally over as they were next to take to the stage. The Nuneaton based four piece play perfect melodic pop punk with stunning vocals and hooks for days. They’re one of those bands that I’ve always thought that if they were based in somewhere like London or Manchester they would be a much bigger band in the UK’s DIY scene. The lead vocals from Dave and Ross sounded spot on and any sound problems that hampered Girls Like Us seemed to have been sorted out. Playing a set full of songs from 2021’s excellent Shackleford: III album, I was hooked on the band and when they finished I felt extremely frustrated that this was my very first time seeing them. It felt like some seriously wasted time. Shackleford shot through their set in an attempt to try and make up some of the lost time and it felt like it was over far too soon for my liking. I hope to see them come back down to London again soon. If you’ve not listened to Shackleford yet, then I suggest you crack on with that. 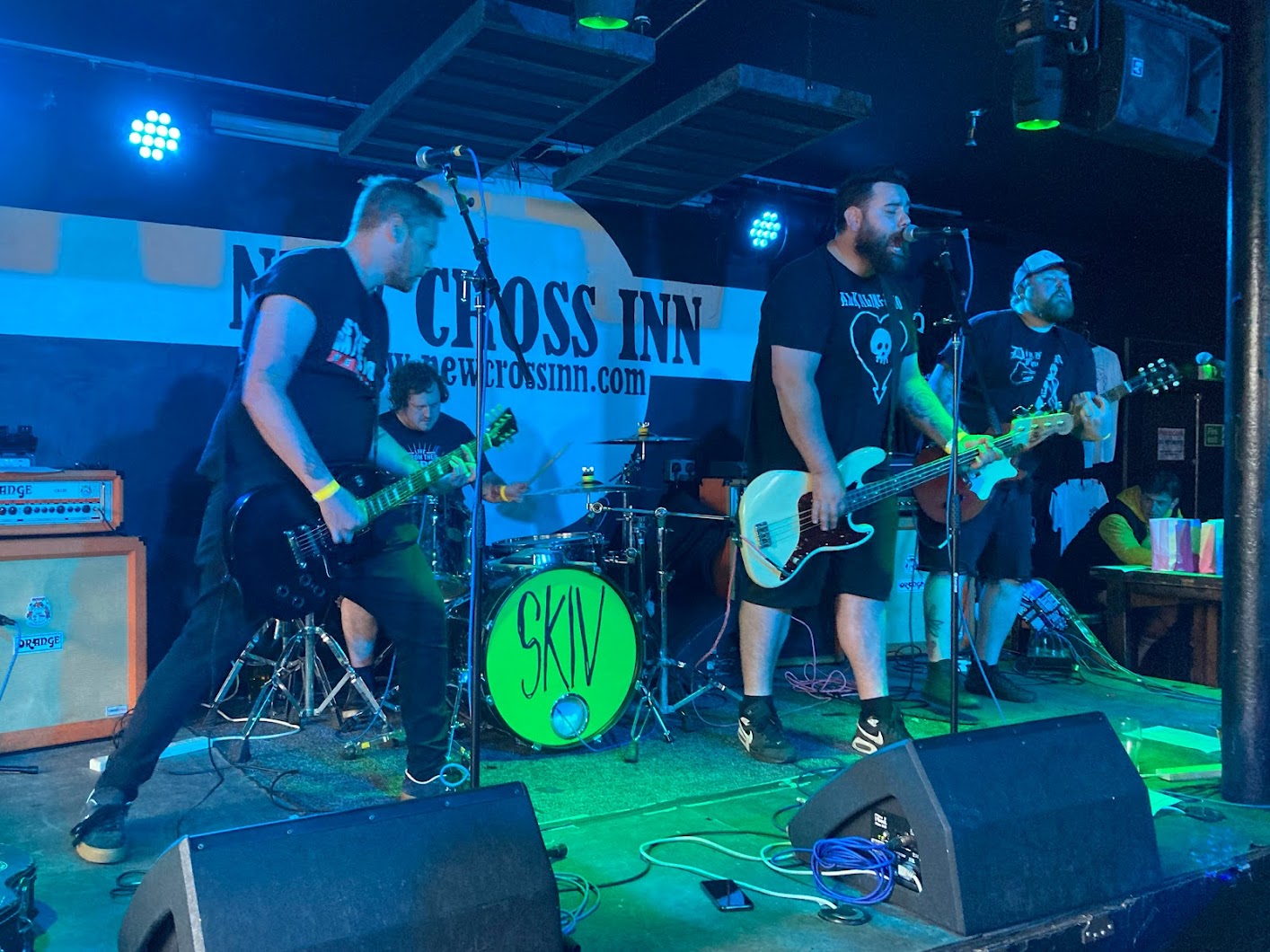 Next on the day were CPRW favourites Triple Sundae. This would be their first appearance together on the NXI stage since January 2020 and there were a lot of people excited to see it. To give a very brief history lesson, Triple Sundae did a tour in Greece and the UK with The Overjoyed way back in 2015 and the bands have remained good friends ever since. It was great to see members of The Overjoyed go right down to the front of the stage to watch Triple Sundae. We’ve seen every Triple Sundae set since gigs started again and they’ve killed it every single time. This was obviously no different. Playing through all the favourites from Glow and Peace Of Mind and getting some special sing-alongs, they also treated us to one of their new songs. The big highlights were that they went old school and played Avoiding Everything Is Not Your Only Option and Unseen. For Unseen they were joined on stage by Conor to play guitar. As soon as the song started, lead singer Hassan jumped down into the crowd to start the pit up as well as singing. Of course, as is tradition, Grey Market’s Theo took the microphone to sing on the song as well. Seeing six people on stage performing this was quite the moment. Triple Sundae are still really, really good and I never get bored of seeing them perform. 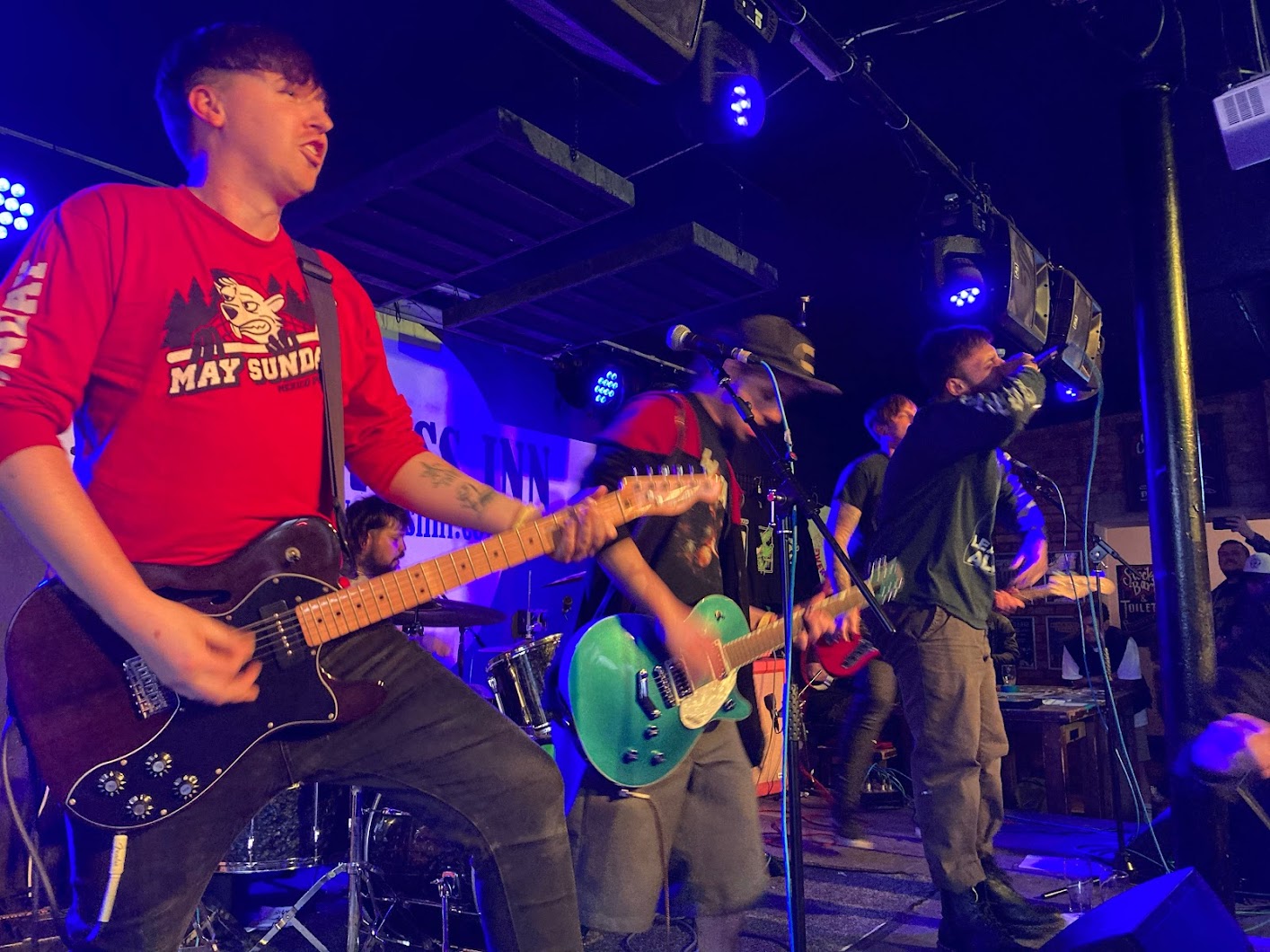 The penultimate act of the night were The Overjoyed who had travelled all the way from Athens to tour the UK. You may know this story but the first time Emma and I really got introduced to the New Cross Inn punk scene was when The Overjoyed headlined a show back in 2017. Since then, the venue and people there have become big parts in our lives and I always link The Overjoyed to that moment. Since that gig, The Overjoyed have released the excellent Aced Out album which has been on regular rotation at CPRW towers ever since. It was amazing to finally hear so many of those songs live. The passion and energy which the band played with was mesmerising and they managed to take the mood of the crowd, which was already pretty high, to a whole other level. I said in my review of the Tree House Fire gig from the couple of nights before how THF always feel like a NXI band despite being from far away (Wales). The same can definitely be said about The Overjoyed. This felt like a homecoming for the band as a lot of people were so excited to see them back. Tone from The Burnt Tapes was down at the front of the crowd and I’d never seen him so excited. He was running around like a child who’d just had a whole load of sugar and that enthusiasm was infectious. The Overjoyed played an incredible set that I think the whole room were sad to see finish. Hopefully they’ll be back soon. 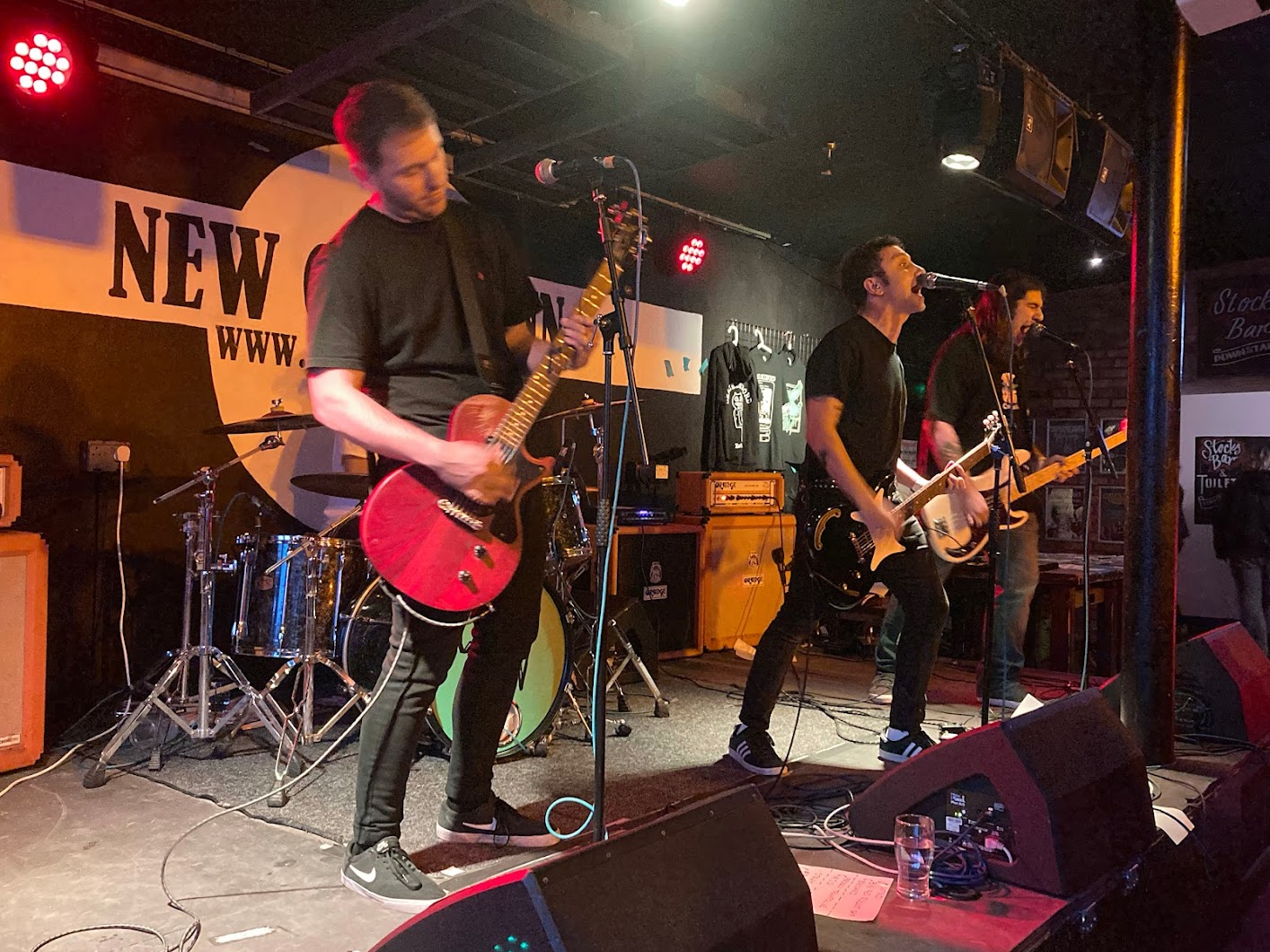 Finally, it was time for SKIV to officially launch their debut album, No Context Bangers, into the world. I’ve seen SKIV a lot of times over the last few years and have always said what a talented group of musicians the band are, but on the album, and with this performance, they’ve really taken things to a whole new level. Since Conor moved to guitar and Leo Harvey (formerly of Just Say Nay) took over bass duties something has seriously clicked and I can see this version of SKIV doing some exciting things. There was so much love and enthusiasm in the room for the band and it didn’t take long for a succession of stage dives and crowd surfs to begin when they started the set. The set, which I guess is what the band had hoped for, was one big party full of fantastic vibes. I was lucky enough to get the album a few weeks early so was reasonably familiar with the new songs – hearing them live gave them a whole new dimension. Something that really impressed me with the album (reviewing coming soon-ish) was the variation in sound, this really helps in the band’s live show. The different styles prevent any staleness in the set and keeps you on your toes. Jordan’s voice (which is one of my favourites in the scene) was on top form and the fact that Conor is taking lead vocals on more songs pleases me greatly. If you don’t know Conor’s other band, Cereal Box Heroes, then I seriously suggest you check them out. This was the best set I’ve ever seen SKIV play and, like I said, they seem to have taken things to a whole new level. There was a new maturity about them, they were slicker, they sounded amazing and it capped off a great day. If you’ve not checked out No Context Bangers yet then make sure you head to the INiiT Records Bandcamp page now. 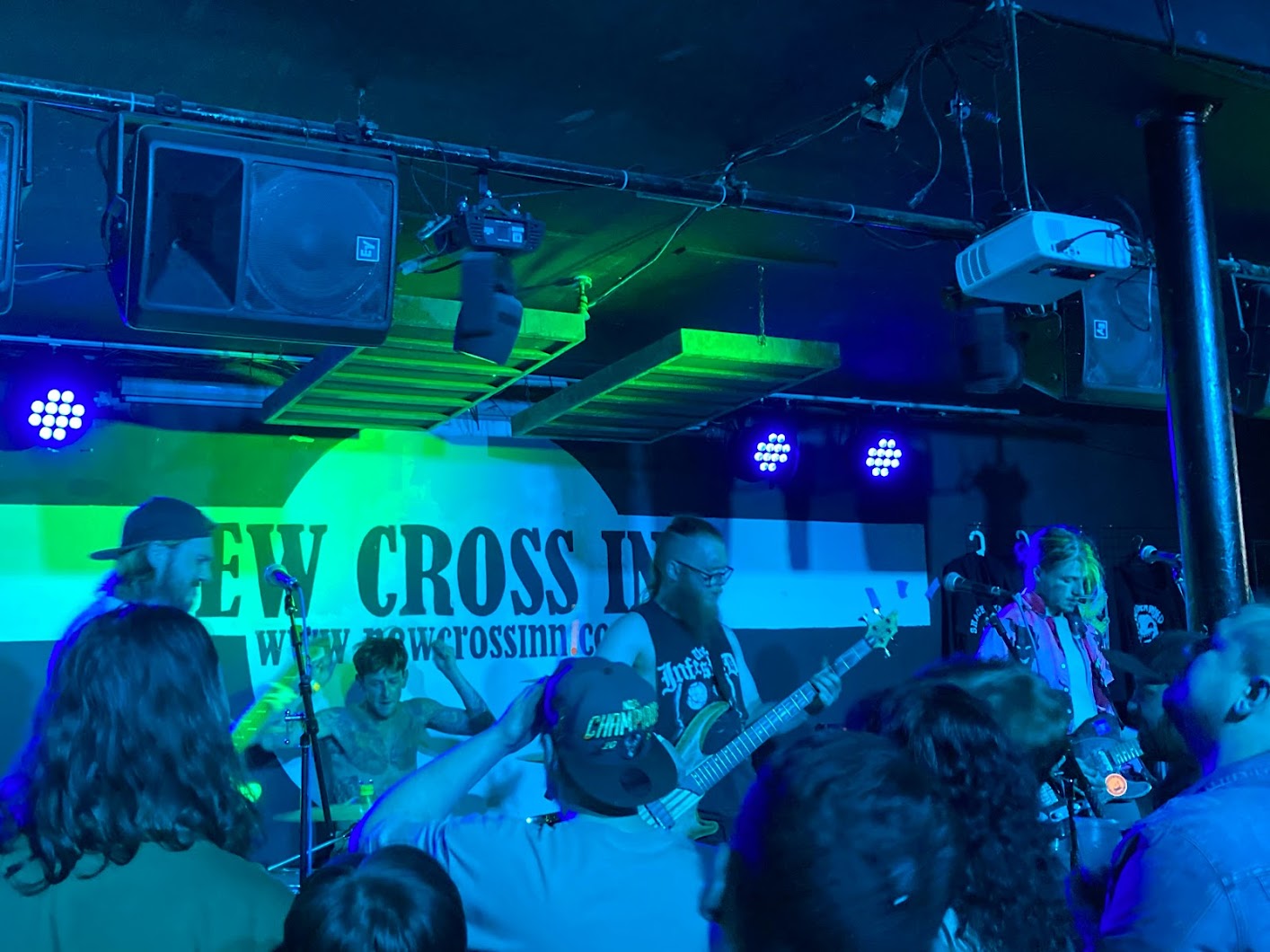 This review was written by Colin Clark. Photos by Emma Prew.
Posted by ColinsPRW at 12:10:00