Album Review: Successfully Not Giving Up by Captain Asshole

If I’ve spoken to you about any one band over the past three years, there’s a very high chance that it’s Germany’s Captain Asshole. I first discovered them after they sent me their debut album, What An Awful Life, for me to check out. I instantly fell in love with the band and have been championing them to anyone who will listen ever since. Earlier this year the band released their second album, Successfully Not Giving Up, with the support of SBÄM Records and Say-10 Records.

Now whenever a band release a follow up to an album I absolutely adore, there’s always the worry of disappointment. Will they capture the same magic of what came before? Will they rest on their laurels and phone an album in? Will it click with me in the same way? These are all thoughts that ran through my head when I heard about this release. Happily, Captain Asshole seem to write songs that are completely tailored to my own personal pop punk tastes. Gruff vocals, big choruses, loads of energy and gang vocals galore. As soon as I heard the first single, Dave Lizewski, I knew I didn’t need to worry – this was going to be another special release. 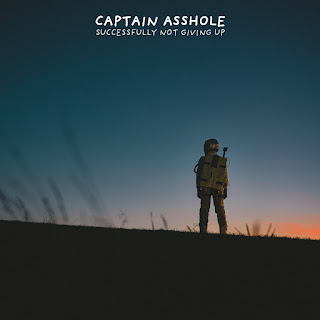 Successfully Not Giving Up begins with the first single, Dave Lizewski. In true Captain Asshole style the song and the album kicks off with a big gang vocal opening. I speak about gang vocals a lot on the various CPRW platforms and how much I love them, but have I ever mentioned why? It’s the way that they make a song feel more inclusive for everyone. Kicking the song/album off with them instantly made me feel involved and I love that very much. After the opening chorus, the tempo jumps up and Manu’s vocals come in on the opening verse. As ever, he’s not alone as Max adds his own vocals giving the song a huge sound. There’s a huge feeling of positivity throughout the song, as the band sing about it being okay to feel different and to keep on pushing forward towards your dreams. Max starts the second song, The Sleepwalking Dead. This song has more of an extended introduction before Max jumps in and is quickly followed by Manu. I already love how the pair are sharing vocals so much. The energy is special and it gives me the goosebumps. The song is about plodding away through your life and feeling stuck in a rut. The song finishes with another classic Captain Asshole trope, the slow building finale with the big gang vocals and harmonies. Can’t wait to sing along with this bit next time I get to see them. The third track is titled Boy, I’m Homesick. On this song the band talk about remembering times past and realising how things haven’t changed for the better. This was one of the songs that was picked as a single before Successfully Not Giving Up was released. It’s clear why this was, as the song showcases all of what the band are about. If you’re a first time listener of the band it welcomes you in perfectly and is probably really relatable.

Ghost In A Nutshell (possibly the best title on the album) is a song all about bettering yourself. On the track Manu talks about looking at his life, particularly at the times where he’s been at his lowest, and attempting to bring himself back from the edge. This is a more serious feeling song than I’m used to hearing from the band and it’s great to see them expanding their songwriting topics like this. The band seem to resist adding all the gang vocals to the song which gives it a much more personal feeling. When the rest of the band do join Manu on vocals the song gets a cathartic feeling which adds a fantastic new layer to the track. The fifth song, Crushing High Lifes, brings the tempo way back up. The band talk about how quickly you can be brought back down to earth after experiencing a massive high, something we all go through from time to time. This is another song that is pure energy. I loved the opening guitar part, it’s a bit more riffy than previous Captain Asshole songs and it’s a great, if not a bit too subtle, addition to the song. It proves that the band are a lot more than experts and choruses, there’s excellent musicianship in here as well. Bringing the first half of the album to a close is You’ve Smashed The Window With Your Head Fred. The opening of the song has this big building segment that eases you into the song before Manu’s vocals eventually come in. This is one of the slower songs on the album but it still packs plenty of punch. This song looks at the need to keep going to gigs as you’re getting older and questioning why you’re still doing it. It’s the great moments you experience and the wanting to do it all over again and again. For anyone in their mid 30s and older, this is a song you will probably relate with a lot.

The second half of the album starts with Better Broken. Here Captain Asshole sing about trying to make your way through life despite all the hardships that may befall you. It’s about learning to exist and be your best even when things feel like they are at their worst. I really enjoy the switch in intensity that happens between the verse and the chorus. There’s a contrast but they also manage to bleed effortlessly into each other. I really love the chorus “it’s hard to walk with broken legs, It’s hard to think with fucked up brains, hard to forget and hard to love, it’s hard to live with a broken heart.” What a great chorus! Apocalypse Whenever was another single released in the build up to Successfully Not Giving Up’s release. The band put out an outstanding video for it that I seriously suggest you check out. Once again, this is an archetypal Captain Asshole song and another perfect choice for a single. Big chorus: check. Endless energy: check. Gang vocals: check. Harmonies: check! The production on the track makes it sound huge and it’s a song that’s begging to be played as loudly as possible. The song is about the planet coming to an impending doom and people’s ignorance to it. Despite the doom that is approaching, the band leave the song with a positive message about still believing and fighting the good fight until the very end. I agree with this statement. The ninth song is titled The One With Unagi. This track has an intense beginning, with no intro we are just greeted by Manu’s vocals shouting “drink down the weight of another year, it’s been a while for you and me”. This song is about meeting up with old acquaintances and trying to force a friendship that isn’t there anymore. As people grow older, they change and turn into different people than who they were when they were younger. I really like this as a song topic, I don’t feel like it’s one that’s really covered much despite everyone going through it at some point. Max and Manu take turns on the verses and combine for the choruses. It feels as if each of them is playing the role of old friends at the bar and we’re hearing their inner monologue throughout the song. This is such good songwriting.

Home Alone II is up next. Home Alone was one of my favourites off of debut album, What An Awful Life, so when I saw the song title my interest really peaked. I’ve heard plenty of songs about the lockdowns that happened in 2020 and 2021 and this is among the better ones. Max and Manu sing about their experiences during this time and talk about the feelings of isolation that they felt and how they coped during these difficult times. There’s an all around darker tone to the song, it makes me think about a metaphoric cloud that seemed to follow everyone around in this understandably difficult time in our lives. Max and Manu do such a good job (arguably too good a job if you want to forget all about it) of painting a picture of what it was like at the time. The penultimate song on Successfully Not Giving Up is Good News, Everyone. This song is all about growing up and taking a different path to your friends. The majority of people reading this will have seen their friends take different paths to you and you will probably have doubted your own life choices. Don’t do that. Everyone lives their lives differently and that’s completely fine. Live your dream. That’s the message I get from the song and I found it uplifting. The final track on the album is Post Malört. I think it’s now law for Captain Asshole to have a song on each album that mentions their beloved The Fest in Gainesville. On What An Awful Life they had Holiday Inn now they have Post Malört. It’s about finding a place in the world where you find comfort and feel like you belong. On this occasion it’s at The Fest but I’m sure we’ve all got our special festivals and venues where the whole world feels right and you’re completely at ease. This is an ode to those amazing spaces that give us so much.

Successfully Not Giving Up is another amazing album from Captain Asshole. In my eyes, theses folk can do no wrong. They’ve managed to keep hold of everything I loved from their previous album and have still found a way of evolving and progressing their sound. This album feels more contained and succinct than What An Awful Life, with every song heading in the same direction. It gives the album a more intimate feel but also explodes with sound throughout. A true album of the year contender. I cannot wait to see these songs, as well as all my other favourites, at least two times this year. I am hoping for more though. Do not sleep on Captain Asshole. They’re the real deal.
Stream and download Successfully Not Giving Up on Bandcamp.
Like Captain Asshole on Facebook.
This review was written by Colin Clark.
Posted by ColinsPRW at 11:39:00