Slam Dunk Festival 2022 has really come around quickly, hasn’t it? This probably is because 2021’s edition of the festival only took place in September due to easing of Covid-19 restrictions. It was a great day out and I have many fond memories and now I’m looking forward to spending another day in Hatfield (hopefully in the sunshine) with lots of my friends and watching lots of fantastic bands. Slam Dunk always put on an absolutely stacked line up with heavy hitters from most points of the alternative music umbrella.
Obviously, we’re most excited for the punk and ska stuff that’s happening at The Dickies stage. With no Punk In Drublic stage this year and Rancid and The Mighty Mighty Bosstones both pulling out early doors, the Slam Dunk organisers have really put together a mega line up. However, one complaint that Slam Dunk and many other festivals quite rightly get is the lack of diversity on the line ups. So, instead of doing my standard picks for the festival, I’m going to focus in on the acts that have members who don’t identify as men or have people of colour in them. It’s great to see these bands being included on the line up and it’s really a great step in the right direction of having a more inclusive line up at the festival. 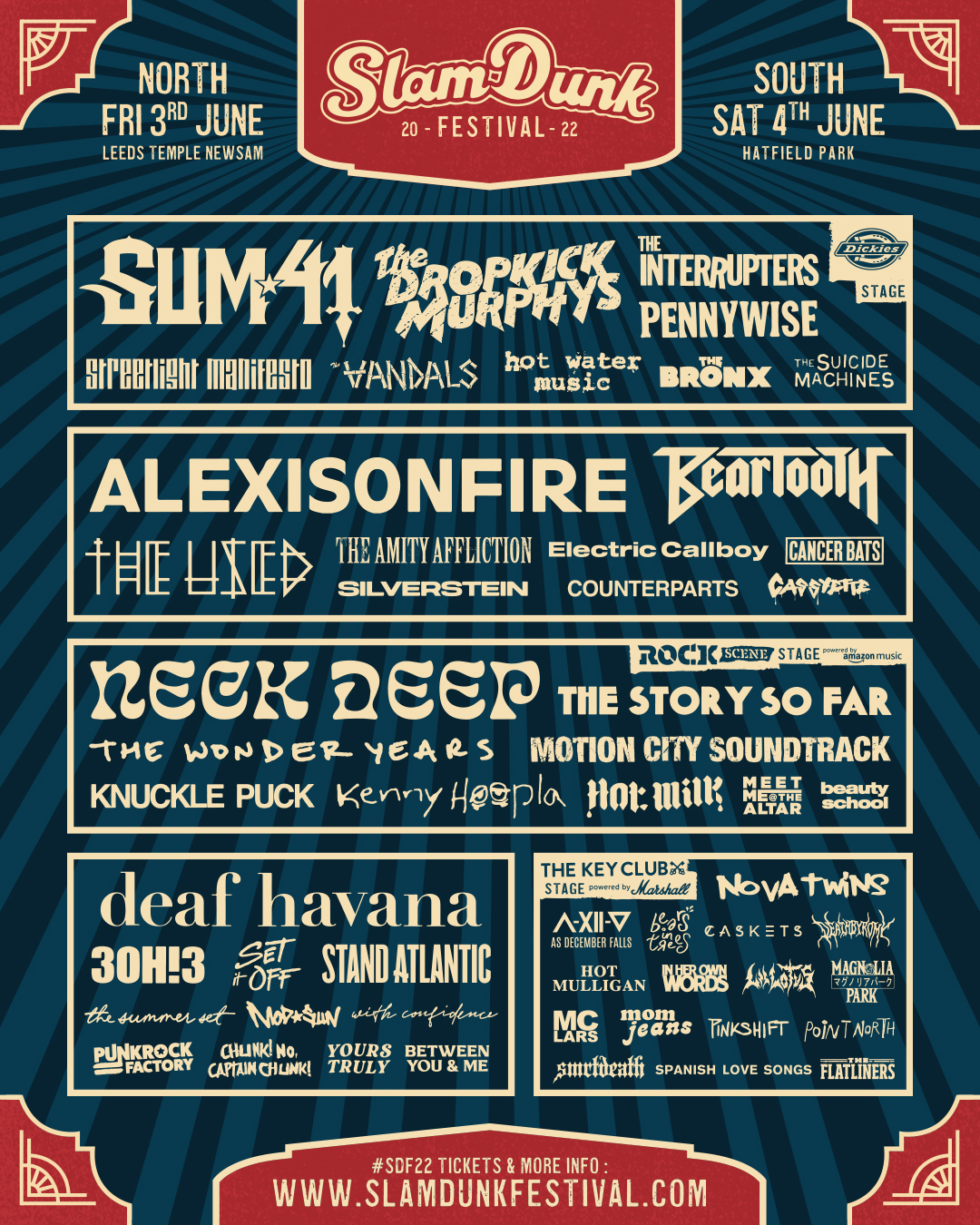 As December Falls
Nottingham’s As December Falls are an alternative rock four piece. The band released their first EP in 2016 and have since released two further full lengths. If you’re unaware of their sound (like I was) then the easiest comparison is probably Paramore. Their songs are packed with plenty of hooks and lead singer Bethany Curtis has a really impressive vocal. I imagine this young band are already turning a lot of heads in their scene and look to get bigger and bigger with a set at 2000 Trees also scheduled for 2022. As December Falls play on the Key Club Stage.

Hot Milk
Hot Milk are a dual fronted emo power-pop band from Manchester. Starting with just a bottle of wine and an acoustic guitar, Hot Milk have developed a huge sound and are seemingly unafraid to explore different sounds in their music. The two different vocalists complement each other well and the breakdowns in their songs look set to start some mega pits. Catch Hot Milk on the Rock Scene Stage.

The Interrupters
California’s The Interrupters have played a big part in bringing ska punk back to the forefront of the punk scene in recent years. Following the release of their album Fight The Good Fight, the band really blew up and deservedly so. After Rancid decided to drop off Slam Dunk this year, I don’t think the organisers could’ve got a more like for like replacement. Singing songs of friendship, family and unity, The Interrupters are one of the can’t miss bands of the entire weekend. The Interrupters are playing the Dickies Stage.

KennyHoopla
Ohio’s KennyHoopla combines indie punk with elements of hip hop, pop punk and new wave. Despite their young age, Kenny has been making big waves in the scene and has already earned big tour support slots with the likes of Yungblud and Machine Gun Kelly. It seems like Kenny is on the way to some very big things and it won’t be many more years until they are placed much higher up the bill. Jump on the KennyHoopla train at the Rock Scene Stage.

Magnolia Park
Magnolia Park only formed in 2019 so the fact that they have found their way onto the Slam Dunk line up already is a testament to how highly thought of the Orlando, Florida, based band are. The pop punk band have a massive sound and write songs fit for big arenas. I particularly like their message of inclusivity and their desire to have a pop punk genre where people of all backgrounds are represented on and off the stage. Magnolia Park could become a very important band in the pop punk scene in the years to come. Magnolia Park are on the Key Club Stage.

Meet Me @ The Altar
Meet Me @ The Altar are one of the most exciting new bands in pop punk. Taking elements of 2000s pop punk and giving it a fresh sound, MMATA are going to earn thousands of new fans at Slam Dunk Festival. They’ve been hotly tipped for a couple of years now and have recently signed to Fueled By Ramen, the home of bands such as Fall Out Boy, Panic At The Disco, Paramore and All Time Low – that’s some really impressive company. The three piece look set to be the next massive success story for the label. I’m looking forward to seeing Meet Me @ The Altar at Rock Scene Stage.

Nova Twins
It’s amazing to see two black women headlining the Key Club Stage at Slam Dunk. And it’s very much deserved. Amy Love and Georgia South bring together heavy basslines, dashes of electronics and a grimey punk attitude to create their own self described sound of Urban Punk. A very unique band in the alternative scene that will command your attention. Catch them headlining the Key Club Stage.

Pinkshift
I was so pleased when I saw Pinkshift announced for Slam Dunk 2022. The three piece have been one of my favourite discoveries of the past couple of years and I’m pleased to see everyone else becoming a fan of the band as well. Combining the heaviness of 90s grunge along with the irrepressible hooks of 2000s pop punk, Pinkshift have enough crossover appeal for fans of the crunchier and softer sides of pop punk. Do not miss Pinkshift! They play the Key Club Stage.

The Summer Set
The Summer Set are a long running pop rock band from Arizona, USA. Their original run was between 2007 and 2017 but in 2021 the four piece announced they would be reforming. I assume that means that Slam Dunk Festival is their first time back in the UK since they reformed so that’s got to be so exciting for fans of the band. The Summer Set are playing the Rock Sound Stage.

Yours Truly
Yours Truly are flying over all the way from Australia for Slam Dunk Festival. The pop punk act have been making big waves in their homeland with their debut album, Self Care, peaking at number 19 in the album charts. An incredible achievement. Now the four piece are gearing up for their next release and have already released a couple of new singles this year from their forthcoming EP. Yours Truly play the Rock Sound Stage.


This column was written by Colin Clark.
Posted by ColinsPRW at 14:28:00