Album Review: Battle Of Armadogeon by Baldhead And The Dreads

We’ve covered Baldhead and the Dreads a lot on CPRW. Before the world broke, the four piece were basically the house band at New Cross Inn in South London. Playing their own unique brand of ska punk that they’ve dubbed Paul Smith Core, the band always put on a fun show. With no gigs this year the band decided to use their spare time to make their second EP. Released by INiiT Records in November, the EP is titled Battle Of Armadogeon and was recorded in bedrooms during the first lockdown. 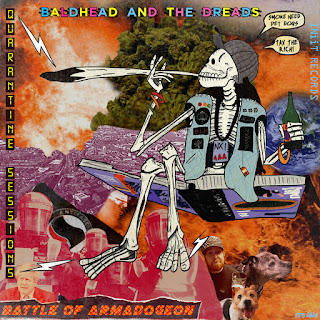 The EP begins with a song that’s become a big favourite at Baldhead gigs, Smoke Weed Pet Dogs. If you are already familiar with the band then you’ll be aware that drugs and dogs made up a big portion of their debut EP, It’ll Be Fiiine…, and it’s nice to see them not stepping away from their roots. Co-vocalist James takes the lead on the song which is extremely catchy. I think a big part of why people have grown to love Baldhead so much is that a lot of songs are quite simple, easily accessible and a lot of fun. Up next is Buckfast And Weed which amazingly is the first song the band has written that is 4:20 in length. Ell takes over lead vocal duties on this track, which shows off a heavier side of the band whilst interjecting brief moments of ska and reggae along with some dub for good measure. The song is largely instrumental, allowing the band to show that they’re good musicians alongside being able to write catchy tunes.

First Class War is a stand out track for me. Returning to their trademark upbeat ska punk sound, James gets political on a song about the frustrations regarding the differences in classes and how the rich people should be made to pay more taxes to help pay for important services. Listening carefully to James’ lyrics I found the song incredibly relatable and I’m sure everyone listening will share the frustrations James sings about during the song. This is perhaps the best song they band have written so far. The penultimate track, Crufts, is another that the band have played live in the past. It’s about how people breed dogs with the intention of them being just for show. It’s a terrible thing to do and I love that Baldhead wrote a song about it. The last two tracks have shown how the band is more than willing to tackle serious topics alongside the more fun and ridiculous. The final song is a bonus track named Lockdown. It’s a slower, reggae song where Ell’s gravelly vocals tell a story of the feelings and frustrations of life in lockdown. Ell sings about how we’ve all been feeling during 2020. When I first heard the song the lyrics hit me hard, as I’m sure they have for a lot of people. Fantastic songwriting.

I think it’s fair to say that this wasn’t how Baldhead And The Dreads wanted to release their second EP into the world. They could’ve easily waited for a time when things had improved (whenever that might be!?) to release Battle Of Armadogeon but I’m glad they didn’t. This EP really shows a band coming on leaps and bounds. The days when Baldhead were thought of as that band that hang around New Cross are long gone, they’re now a proper band – a very good proper band.
Stream and download Battle Of Armadogeon on Bandcamp here.
Like Baldhead And The Dreads on Facebook here.
This review was written by Colin Clark.
Posted by ColinsPRW at 12:35:00