Album Review: Whatever... This Sucks by The Mizzerables

Like many of my discoveries this year, I found out about The Mizzerables because I happen to follow the Bandcamp user Rojarax. I've never met the man but boy does he have some great taste in music. The Mizzerables are a Chicago based three piece pop punk band. Lead by Jeff Mizzi (formerly of Common Rider, Ten Ninety and About The Mess) and accompanied by Dave Vazzano and Korey Brisendine, The Mizzerables released a new fourteen track album named Whatever... This Sucks in August. On my first listen I was instantly hooked. 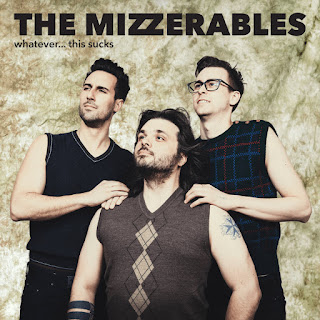 The album begins with the song Gravity which was originally released as a single before Whatever... This Sucks came out. This was a great choice as it's a great introduction to The Mizzerables, if you didn't already know them. Starting out with some buzzing guitar and a pounding drumbeat, you immediately get the sense that this is going to be a fast paced pop punk record. It's also super accessible, with the lyrics structured in short, sharp lines and a super catchy chorus that you will pick up in no time at all. As much as I enjoyed Gravity, it was the second song F.K.I. that really hooked me into the album. It's a song about life not going how you want it to and it bringing you down mentally. The line "if failure to success I'm fucking killing it" is the real stand out line that caught my attention immediately. I really like how the song is set out like a conversation with Mizzi asking the listener how they're doing after talking about what's going on in his own life. I thought this was a great way to subliminally reach out to a crowd without them even noticing. The melody of the third track, Crabby Crab, delighted me on my very first listen. It's a kind of a bouncy ska/country/folk rhythm played alongside such fast paced pop punk. That description really doesn't give it the credit it deserves. It's just a lot of fun and will get you to have a great boogie. On the track, Mizzi plays the role of a crab who isn't the most friendly of crabs to hang out with who wants to convince that special crab he likes that he's not all bad and they should spend time together.

The best way of describing the sound of Better Off Dead is if Tony Sly sang for Teenage Bottlerocket, that's what this track sounds like to me and you know what? I really love it. The song returns to the topic of mental health, with this time Mizzi singing about your brain really bringing you down to the point of you thinking it might be best to end it all. (It never is). I always mention how important it is for everyone to continue to talk about mental health and songs like this are great for people to realise they are not alone with how they're feeling and will hopefully encourage them to go and get some help. Every Once In A While sees The Mizzerables slow things down slightly with a mid-tempo pop song about loving your friend and always being there for them whatever they might be going through. This is a really sweet song that you don't hear enough of. The lyrics in the chorus are perfect – "but every once in a while you hold my hand, when the world comes down and no one understands, so from now till the end know that I'm here my friend, my love and this will never bend." The added harmonies subtlety layered in add an extra bit of emotion has Mizzi pours his heart out. The sixth song, Let's Go, is about escaping from all your mundane life and go on an adventure with your special someone. It's a slower song but feels full of optimism. It sometimes feels like a rare occurrence to find a punk song that is optimistic – that says a lot about the state of the world currently – so Let's Go is a breath of fresh air.

Still Kickin' Around looks at the topic of getting older and still being in bands and still singing about the things that are important to you even if times have perhaps moved on. This song is one that all the aging punk rockers will really relate to whether they play in bands or not. For the most part it's a relaxed performance by The Mizzerables, at times it feels like a pleasant jam between pals. There are however some fantastic bass lines and guitar solos spread throughout the song that do add an extra flavour to the track. Up next is the title track Whatever... This Sucks. This pounding pop punk track sees The Mizzerables jump back into the murky waters of mental health, particularly how depression can just make you zone out from everything in the world and how rubbish it is. Throughout the song I was really reminded of the melody from a Me First & The Gimme Gimmes cover. I can't quite put my finger on which track it is but there is definitely a feeling of familiarity about the melody. This helped me get on board with the song straight away though. Suburbia is one of my favourite songs on Whatever... This Sucks. It's a humorous song about daydreaming about living in suburbia and getting there but quickly discovering it's not for you. This is one of those songs where you can kind of picture the music video for the song, The Mizzerables do such a great job of painting a picture with their lyrics. The song is packed with great lines, my particular favourite is "We're gonna hang shit on the walls, put some hardwood in the halls, take our trash out to the curb, and say hi to Bob and Kim."

The Mizzerables bring up the pace and aggression on Reverie. On my first listen I was instantly thinking of early Descendents songs with some of the snarl in Mizzi's vocals, the prominent bass lines and the slightly out-there guitar parts. It's a short and repetitive song about trying to push down your daydreams instead of trying to achieve them. I loved this change of pace on the album, it really gave it a little boost that was perhaps needed at this stage. The pace continues on Sticks And Stones. Channelling some old school Green Day with the sound of this one, Sticks And Stones is about that person who for some reason needs to constantly cut people down with their words to feel better about themselves. I was so impressed with the drumming on this track, it doesn't sound overly complicated but the speed it's played at throughout is really impressive. It proves the theory that songs don't always have to be unnecessarily intricate to be a good show. Simple and to the point also works very well. Dancing On Your Grave has a modern pop punk sound that hooked me from the start. After a big intro, the music drops out and Mizzi's vocals come in. This was a great way to start the song as it had me ready to sing along from the start. It's fast paced and loaded with hooks that keep you listening throughout. The track is about someone who lives life to a high excess who ultimately dies even after being given plenty of warnings about their health.

The penultimate song is titled Forty Five. This bouncy track offers a completely different sound to anything else so far on Whatever... This Sucks. It's great that thirteen tracks into the album The Mizzerables are still pulling new tricks out of their hat. The melody makes Forty Five feel as much like a barroom sing-along as it does a punk rock song and I'm all about that. The song laments the current state of politics in the USA in a tongue-in-cheek fashion. Sarcastically drinking toasts to all the hypocrisy that is going on currently. The fourteenth and final song on the album is Thoughts And Prayers. It's not often you come across albums that are fourteen tracks long these days, people just don't have the attention span for them. Because of this, Thoughts And Prayers needed to be an absolute banger. I can happily report that Thoughts And Prayers is a banger. A big banger in fact. The introduction builds up slowly before the genius lyrics of "pressure cooker heats up" come in. I don't know if this was done on purpose but I did get a kick out of it. The first third of the track chugs along, slowly building to a big chorus that is full of emotion. Interestingly the song adds a rapper during the song, giving the song a completely different musical element that works really well. The song really comes into its own on the big finale where the chorus and rap sections come together, harmonising with each other and sounding incredible. A fine way to finish a fine album.

This review was written by Colin Clark.
Posted by ColinsPRW at 11:52:00