Press Club are a four piece band from Brunswick, Australia. In March, the band, consisting of Natalie Foster, Greg Reitwyk, Frank Lees and Rufio MacRae, released their new album Late Teens. After stumbling across it on Bandcamp and then hearing some friends speak very positively about it I decided it was time to really give it a proper listen. 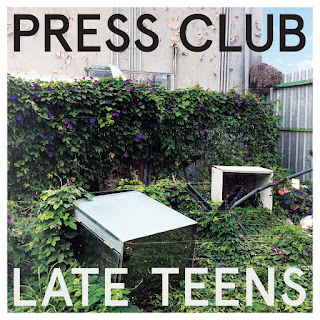 Late Teens begins with the song Crash. The song starts with some dreamy and distorted guitars before Natalie's vocal comes in. The first thing you notice is the rawness in the recording of the vocals, giving the whole song a record live vibe. This is an indie punk song that goes along at a methodical pace. It's about always being let down again and again and being fed up of it. The song's high point is the chorus that begs to be sung along with. Up next is the up-tempo Headwreck. I have to admit that I much prefer Press Club when they are playing this fast paced style of indie punk over the slower paced stuff. It's just got more ummphh to it. The energy on the track is outstanding, really getting my blood pumping. Headwreck is about guys who go out of their way to play mind games with their partner and wanting to find someone who doesn't do that. The third song Suburbia is one of the tracks that Press Club released before the album's initial release. It's clear when you listen to the song why it was chosen. It really features the best of Press Club. It starts out fairly slowly but then gradually builds towards a fast and catchy slab of indie pop punk. Natalie's vocals are superb here, brilliantly emotional on the slower parts and then showing plenty of punk rock attitude when things speed up. Suburbia is a song about not being able to let go of a former love back home who has fallen for somebody else.

On my first listen through of Late Teens the fourth song, My Body Is Changing really shone. Of course it was the chorus of "my body's changing, my body's changing, my body's aching" that really caught my attention. It's such a simple but really powerful chorus. I can see this song becoming an anthem for the band. The song is obviously about the changes your body goes through in your life and taking control of it, not caring what other people might think. The fifth song, Golden State, is a slower shoegazing-emo song. Back are the dreamy distorted guitars and raw vocal recording style. As the song progresses Natalie's voice gets more and more stretched, giving a huge amount of emotion to the song's finale. Golden State is about being in a relationship with somebody who is struggling with their mental health and how hard it can also be on you. This is a interesting take on the subject of mental health and not one that's ever really tackled despite its importance. This will be a hugely relatable song for many people listening.

The second half of Late Teens starts with a instrumental named Side B which leads brilliantly into the seventh song, Ignorance. The song gets going with some harder guitars that play off of some softer vocals. The range of vocals shown by Natalie throughout this album is just staggering and not something I'm really used to listening to punk music. Ignorance is another big highlight on Late Teens for me. I love the ups and downs on the song and of course the build towards the end of the track. It's about the mistakes you make when you are young and trying to make things right again. Let It Fall starts out fast and loud and has plenty of that distorted sound that seems to be a bit of a trademark for Press Club. This is without a doubt one of the angrier tracks on the album with Natalie sounding thoroughly pissed off throughout the song. It's a song about the continued fight for equality between men and women and refusing to give in. I think this is why the lyrics "let it fall" are sung in the same tune as the way Lady Gaga sings "can't read my, can't read my" in her smash hit song Poker Face. As far as I'm aware Lady Gaga is someone who has done a lot to help with equality in the music scene. This was a cool little nod her way and really helped add something a little extra to the song.

The ninth song on Late Teens is named Trading Punches. It's an up-tempo song that I think could quite easily draw comparisons with RVIVR (on the songs where Erica has the lead vocals). It's one of the more punchy pop punk tunes on the albums and that chorus is so catchy that it will be buried in your ears for days to come. You'll find yourself uncontrollably singing "I wouldn't give it away, I wouldn't give it cause, I know where we came from, I know where we came from" for days after listening to the track. The penultimate song and the album's title track starts off in stunning style. Late Teens begins with a huge accapella vocal section that really drags you into the song - I bet this is just incredible live. Soon the band come in with a slow paced methodical plod style before things pick up and the song really comes to life. It's interesting listening to the vocals and drums go down one melodic path while the guitars go off and do their own thing. It's a contrast that also works very well together. Last but not least is Stay Low. This song has the feel of a final song to it, starting with some midwestern style punk rock guitars before some superb punchy vocals bring up the tempo. The track takes us on a bit of a rollercoaster with some great ups and downs. It all flows so naturally that it's easier to just go along with it. The chorus is really a fists-in-the-air shout back at the stage moment and the way things build to the track's final moments is a joy to listen to.

Late Teens by Press Club isn't in the style of something I'd often listen to but this was a really enjoyable thirty-eight minutes of music. The band just do their own thing without feeling any need to conform to what is conventional. You have to respect that. Australia continues to pump out these incredible bands. Press Club are another to add to a massive list of bands from down under.

This review was written by Colin Clark.
Posted by ColinsPRW at 08:31:00