Stomp Records are one of my all time favourite record labels. The Canadian based label has consistently put out great records since 1994. Earlier this month they released the brand new album from Edmonton based five piece Fire Next Time. Titled Knives, the album features ten songs of punk rock with hints of folk. Given the quality of albums that Stomp have put out for the past twenty-four years, I had high hopes and expectations for Knives. Let's see if it delivers. 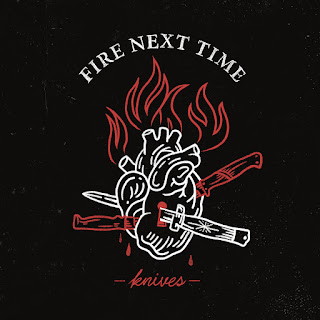 Knives begins with a song titled Wanderlust. Here we are greeted with a mid-tempo punk sing-a-long. It starts out with more of a folk punk sound before gradually shifting into a punk style. Lead singer James has a powerful and gruff voice that fits perfectly with the style. It's like a love child between Chuck Ragan of Hot Water Music and Garrett Dale of Red City Radio. James also does a great job in taking you on a journey, something that Chuck and Garrett both excel at. Party Foul is a song about abusing drugs and alcohol. I really enjoyed the way that it methodically builds from the beginning and gradually grows bigger in sound, particularly the chorus which features some fantastic gang vocals. Lyrically the band do a great job in painting a picture, it's one of those songs where you can easily imagine the music video. The third song, Collars, gets started quickly, giving Knives a quick shot in the arm. The song is about looking back at the past and analysing the things you did – the good and the bad. I loved the shifts in melody in the song. The hook is superb, giving the song a bit of a pop sound amidst it's rough-around-the-edges style. The song allows for the band to show off their musical skills with some wonderful up-tempo playing.

Old Scratch is the song I kind of thought should have started Knives. It's a slower number that features a big vocal performance. The way in which James' vocals are delivered is almost chant like and is begging to be sung along with. It helps that the melody is similar to a certain well known song by a man named Johnny Cash. I can see this being very popular at a Fire Next Time gig for getting a crowd involved with the set. Walking Blind brings us to the halfway point of the album. It's another slower song that features a more prominent acoustic guitar and keyboard, showing another side to the Fire Next Time sound. The band seem in more of a thoughtful and retrospective mood here and you can't help but be drawn into the track. Musically the song is powerful and vocally it's packed with emotion. The fifth track, Bethlehem, is an interesting song. Its first half is this epic instrumental that adds some great theatrics to the song. Just when you think that this song completely instrumental, the band switch to more rough and ready folk punk. James' raw vocal accompanied briefly by the acoustic guitar really is a big contrast and gets you fully invested into the song. Of course we go full band quickly for another powerful track. Up next is the fast paced A Jameson Fracture. The duelling guitar lines in the song's intro are fantastic and have me eager to see where the song goes. There is a story telling element to the song that hooks you in, as well as it being quite a positive track that talks about not taking things for granted.

Hurry Up And Wait is one of my favourite tracks on Knives. A big reason for this is the use of gang vocals on the chorus. I'm such a lover of great gang vocals and they are executed brilliantly on Hurry Up And Wait. The song is a mid-tempo plodder that's perfect for singing along too. It's that track that will have you arm in arm with a stranger at a gig shouting along like you've known each other for years. The way that the song builds towards its final chorus and those fantastic gang vocals put a huge smile on my face. This is how you do mid-tempo punk rock. The penultimate song is titled Birch Wood. There is a fun country tinge to the opening of the song before we really get going. Gang vocals feature heavily again without really being too over bearing. I really like how the band have taken a bit of a different style but still continue to sound very much like Fire Next Time. This shows some great musicianship and superb songwriting skill. The final song on Knives is named Critical Fail and this song is everything you want from a final song. It starts quickly with some stabby guitar and some intense vocals. Things go on to become more melodic with the vocals keeping the intensity going. There is a big musical interlude around the halfway mark of the song that takes you wonderfully to the song's, and the album's, conclusion. I love it when a final song feels like the last hurrah and it seems as if the band are putting all of what they have left into the track. This is without a doubt what is happening here.

This review was written by Colin Clark.
Posted by ColinsPRW at 15:02:00