Album Review: Death From Below by The Palatines

The Palatines are three piece pop punk band from McAllen, Texas. The band formed in 2016 and feature Javier on guitar and vocals, Richard on bass and vocals and Jeff on drums. In August of 2016 the band released their debut EP, Never Made It, and then in February of 2018 they released their first full length album, Death From Below. I first found out about it after browsing Bandcamp and being attracted to the album's artwork – which you can see below. It's quite striking. So the artwork is great but is the album? Only one way to find out! 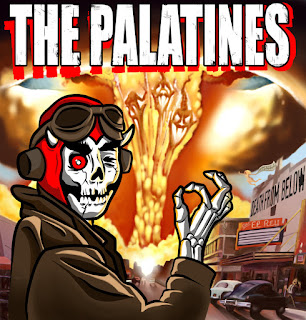 Take It Back is the album's opening track. The Palatines play fast paced melodic pop punk music in a similar vein to bands such as The Copyrights or The Dopamines but I'm also reminded of Face To Face's lead singer Trevor Keith on the vocals here. Keith has one of my favourite voices in punk rock so I have no complaints there. Take It Back is about regretting your actions and wanting to be able to make up for them. Up next is the song Ten More Minutes. It starts with an alarm going off and a cameo from Wonk Unit's Alex getting quite annoyed with it. This introduction really gets your attention and you soon find yourself in a fast paced pop punk jam about not wanting to go to work. I loved the music throughout the song – it's 100% energy from start to finish and flies by, before you realise the song is done. Dilemma is more of a mid-tempo song that jumps between melodic punk rock and buzzsaw pop punk brilliant. The vocals are layered wonderfully with some superb harmonies during the chorus. It's about wanting to break up with someone but being scared of losing everything because of it.

The fourth song on Death From Below is named Denise The Grease. It's a short, rapid fire, fun song about having a crush on a waitress. This isn't a song that's going to change the world but it does put a smile on my face. I can definitely get on board with that. The silliness continues on the next song, Gross Girl. Keeping up the fast paced pop punk, Gross Girl is simply about your girlfriend being quite disgusting. It's actually quite a sweet song when you think about it as he still loves his girl despite all of this grossness. I particularly enjoyed the ending of the song when they just spell out the word "gross" repetitively, really allowing for some great audience participation. Following this pair of past paced tracks is the more melodic Mina Doesn't Know. Unlike many of the previous songs, Mina Doesn't Know builds into the song before we hit the vocals. I really liked this variety and it happened at the perfect time to prevent the music becoming stale. This feels like one of the more accomplished songs musically with some excellent fills and solos included in the track.

Demons Whispering continues this more melody-driven style of punk rock. This song, in truth, really reminds of Face To Face. Face To Face's music always has this incredible energy that is hard not to get swept away by. I get the same feeling with The Palatines, particularly on Demons Whispering. Take A Left Turn has a guitar tone that might you might expect to hear from The Lillingtons or Teenage Bottlerocket. That kind of sci-fi pop punk sound that I just adore. The track is about how strange and alien-like the suburbs feel and how all is not as it seems. I think this is really clever songwriting from The Palatines. Using a sound that is associated with sci-fi punk to help set the scene of the song's topic. Then The Palatines take us down a completely different path to the one we've been on for the previous eight songs. Illuminatty Lite begins as an angry hardcore track that's sure to get folk really amped up. The band spends the first two thirds screaming the lines "illuminatty light, you can't stand me, I can't stand you" over and over again. This is a ferocious side of The Palatines that I quite enjoyed. When we get to the final portion of the song we get The Palatines we, by this point, know and love as they revert to some classic pop punk and sing about why they don't get on with the "Illuminatty." After a brief piece of Googling I found out that this is a team of body building gym types who believe they are the elite but secretly cheat. They do sound like bad eggs.

The tenth song, Take The Reins, explodes out of the block with some big vocals. This is a melodic sing-a-long with more of a mature skate punk sound. It also feels more driven, with the tempo rarely straying from its path. There is a wonderful intensity in the vocals that really keep you interested in the song, which is about wanting somebody else to take control of your life so you stop making mistakes. Burnt Out By Xmas is The Palatines' anti-Christmas song. It talks about not having energy to celebrate the big day and not having any money to buy people presents. It's a short and sweet song that's incredibly infectious. Considering the subject is kind of sad, the sound of the song is actually quite joyous and features plenty of great gang vocal "whoa-ohs." Falling Off tackles the issue of addiction and in particular falling off the wagon. This is one of my favourite songs on Death From Below. The opening guitars made me feel like something big was about to happen and that feeling was certainly correct. It's a very powerful song that I'm sure plenty of people will find relatable and hopefully might help anyone who is struggling to stay sober.

Grave Misfortune is another big highlight from Death From Below. It features some rapid fire vocals that just blew me away and really had me eager to see where the song goes. It's about being a person who lives in great comfort before losing their job because the company has moved out of town. I love this super fast paced pop punk that's also super catchy and great to sing-a-long to – so long as you've got the energy to keep up! The penultimate song is titled Run Red. It's a love song of sorts. It talks about going to prison for attacking someone because you were protecting your girl. It's one of the more unique topics for a love song but The Palatines do pull it off expertly with the lyrics really painting a great picture of events. The fifteenth and final track on Death From Below is named Girl In The Ocean. As I always say, a band should save their big epic for the final song and The Palatines certainly do this. It's a mid-tempo melodic punk jam that is about the break up with a girl who made a lot of sacrifices for you and feeling bad because of it. Obviously it's quite a sad feeling track and is filled with plenty of emotion. This is definitely the most emotional track on the entire album and a great choice to finish things off.

Why is it that so many of my best Bandcamp discoveries are because of awesome artwork? I love this style of pop punk and The Palatines have put out one of the best albums in this genre in quite some time. I thought that at fifteen songs long it might drag a little bit but it flew by and kept me thoroughly entertained throughout. The vocals are just superb and are backed perfectly by some great, great tunes. If you love bands like Teenage Bottlerocket, The Lillingtons, Face To Face, The Copyrights, Dear Landlord, The Dopamines, or any of the other bands like this, then Death From Below by The Palatines is essential listening.

This review was written by Colin Clark.
Posted by ColinsPRW at 16:13:00