NOFX
The first Nofx album I bought was “White Trash Two Heebs And A Bean”. In my opinion, their best album. It’s natural for people that listened punk in 90's, having bands like this as a reference!

Rancid
And Out Come The Wolves and Life Won’t Wait are a must for a band like us, that mix punk and ska music.

No Use For A Name
My favorite melodic punk band. When I write songs for Talco, I’m indirectly often influenced by the melodies of Tony Sly. No Use For A Name are one of the bands that I've never stopped listening to, since I was young.

Lagwagon
Listening to their latest album, Hang, makes me realise how great Lagwagon are at songwriting. With an impressive back catalogue, including Thrashed, Hoss, Double Platinum….only a few bands can be that consistent. Lagwagon is one of the best examples.

Bad Religion
They were one of the first punk-rock bands that mixed melodies with old punk-rock, giving birth to a new wave of punk-rock.

Dropkick Murphys
Since the beginning of Talco, Dropkick Murphys and their unique blend of folk-punk have been a huge influence on us. Sing Loud Sing Proud is the soundtrack to our 10 years of traveling.

The Clash
The revolution of punk-rock. Since London Calling, punk-rock gave birth to a new way and punk attitude. One of the most important bands in the history of music.

Satanic Surfers
Hero Of Our Time - Another album that I Love and have listened to on repeat for 17 years!

Mad Caddies
We’re now good friends with these guys, but when I was young I saw them as fan countless times at concerts in Italy. Duck And Cover is one of Talco’s first influences. 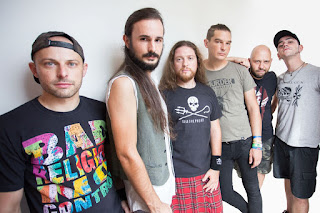 Talco have a new record out in September. Pre-order it here: http://amzn.to/2bgMUtB