Album Review: Pharmacie by Apologies, I Have None

Let's start this review with the statement that the album I'm about to review is my most anticipated album of the year. The album I'm talking about is the long awaited second album Pharmacie by Apologies, I Have None. From the first time I saw them support Less Than Jake at the Barfly, to hearing their debut album London, to checking out their back catalogue and getting all of their newer material I have adored everything the band has done. Needless to say there was a little pressure on this album to be great. I was also incredibly interested to see where they go with the sound. 2014's EP Black Everything saw the band go down a much darker road than they previously have, would they do even darker on Pharmacie? One way to find out! Deep breaths, here we go. 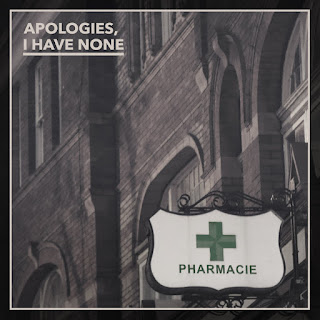 The album begins with a song they've been playing live for a little while now. Love and Medication is my current song of the year - it's just superb. Beginning with a little piano (which they don't do live) before Joe Watson's pounding drums come in immediately giving the song a huge feel. The Apologies front man Josh's unmistakable vocals come in to play next. The opening lyrics of "Words Have A Weakness, They Break When It Comes To Explaining All The Reasons, They Fray At The Ends And String In Together The Sentences Needed To Tie Up All Of My Questions" already make me want to sing along with the song. This, along with the drums, got me hooked immediately. After the opening verse the whole band come in to give the song a beautiful full sound. What a way to start the album! Up next is the song Wraith that also appeared on Apologies recent split with Luca Brasi. It's a head banger from the outset. Something Apologies have always done brilliantly is find a way for the listener to get fully engrossed in their music despite the dark tones of the song. Wraith features a chorus of "Fade Away, Fade Away, Waste Away Wraith, I Don't Wanna See You Again" that will have you chanting along like your part of some kind of cult. Josh is incredibly angry on this track which gives the song a lot of emotion. The third song is a reworking of The Clarity Of Morning which originally appeared on Black Everything. This is a slow building song but stick with it because there is a big pay off. Clarity Of Morning is about hating your life and hoping everything is better when you wake up in the morning. Josh also sings of the troubles in your life causing problems in your relationship. The lyrics "I'm Sorry, When I Said I Didn't Love You What I Meant Was I Hate Myself" are particular heart-breaking.

From now we're in completely new ground with Pharmacie, I've never heard the following seven songs before. Anything Chemical is a much slower and softer song than what I've come to expect from the band - the song is a slow builder. By the time the song does actually hit its high point it actually takes you slightly by surprise. It's always good when music manages to surprise you. I really enjoyed this softer sounding Apologies, proving that they don't always need the big, hook filled sing-a-longs to pull listeners in. The fifth song on Pharmacie is title Goodbye, Piece Of Mind. Like Anything Chemical before it this song is a slow builder. A lot of effort seems to have gone in to getting the guitar tones absolutely faultless on Goodbye, Piece Of Mind. They sound perfect, really creating an atmospheric sound. It flows nicely into the next song, Crooked Teeth. The opening vocals of the track actually have a bit of a pop tinge to them and yet again grab your attention from the outset. It also feels somewhat like an interlude as well as an intro to what I assume will be the beginning side B of the LP. It's a song about finding your place in the world despite feeling like you don't belong. This then leads into the song title that really caught my eye when I was reading the track list before I listen to Pharmacie - Everybody Wants To Talk About Mental Health. Josh flicks switches between calm and angry on the track which gives the song so much life. The song is about not always wanting to talk about your problems and finding over ways to get a release. The spite and venom in Josh's vocals at the end of the song is fantastic, you can really feel his anger.

It's Never The Words You Say is the title of the eighth song. This song definitely feels like a cross between the London and Black Everything era of Apologies career. It features the big sing-a-long that was a staple of London combined with the more distorted guitar sound that Black Everything gave us. The penultimate track on Pharmacie is the eight minute epic Killers. It was only a matter of time before Apologies wrote a song of such length. Killers starts out being very atmospheric and calming before Josh explodes with some more anger. This then leads into a prolonged musical section that really shows off Josh, Joe, James and Simon's abilities as musicians. Josh's vocals come back into play at the very end of the song as he sings "It's Been A Long Year, It's Been A Long Few Years" with a lot of emotion. The tenth and final song on Pharmacie is named A Pharmacy In Paris. This is another song that takes the best bits of London and Black Everything to create something masterful. A Pharmacy In Paris is about finding someone who levels you out in the way that an anti-depressant might do the same. There is a section in the middle of the song when everything gets super quiet with Josh almost whispering before the song builds towards its finale. I enjoyed the use of the lyrics "Love And Medication" towards the end of the track. Signalling that the album has come full circle.

Pharmacie was well worth the wait. Personally I don't know that anything will top London for me (but only a miniscule amount of albums from any band would do that) but Pharmacie is an absolutely brilliant release. I think with Apologies, I Have None you shouldn't compare any of their releases with each other too much as they've always been a band that have progressed their sound. Remember that they started as an acoustic two piece. Pharmacie has ten of the most thoughtful, well written, brilliantly played and perfectly crafted songs you're likely to hear this year. Go order it now!

Like Apologies, I Have None: https://www.facebook.com/apologiesihavenone/
Posted by ColinsPRW at 11:41:00